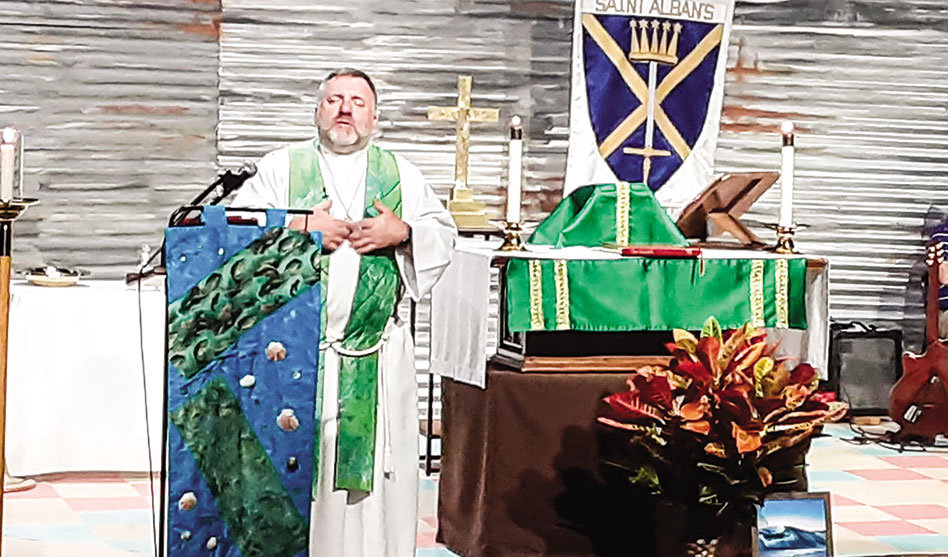 The Rev. Kevin Johnson is pastor of All Souls Episcopal Church. (Photo by Matthew Shaw)

Shakespeare said all the world’s a stage, and for one downtown Arlington church, the stage is its pulpit. All Souls Episcopal Church has used Theater Arlington as its place of worship for 13 years. It is one of four LGBT- affirming churches in Arlington, according to the website c.

The church was formerly known as St. Albans Episcopal Church, but church members changed the name to avoid confusion with another Arlington church called St. Albans, which broke away from the Episcopal Church after it became too liberal, explained All Souls’ openly gay pastor, the Rev. Kevin Johnson.

“It just became too confusing for the community to have two churches with the same name,” Johnson said. “[Church members asked themselves] what name would be reflective of who we are as a gathered people of God? And they chose the name ‘All Souls.’”

Theater Arlington became the church’s home as the national church became more progressive, with the ordination of women and blessing of same-sex couples. The bishop of the local Episcopal diocese became more conservative as a result, and he pulled some parishes out of the denomination, explained Johnson.

“There were a group of people who said, ‘We’re not leaving the Episcopal Church because these are the values that are important to us.’ So they basically got kicked out of their brick-and-mortar churches, and they coalesced here at Theater Arlington,” Johnson explained.

“The theater’s been great,” he continued. “It’s been really nice to share office space with people who are from different walks of life, and they’ve been very generous to us. It’s a mutually beneficial relationship.”

Parishioner Pam Hardaway explained that in 1976 the National Episcopal Church voted at its convention to ordain women. “We think when God calls someone, He calls someone,” she said. “We think God is the one in charge, not us.”

However, there were some bishops who disagreed with that decision, and they declined to let women go through the ordination process in their dioceses, she continued. When the national church voted a woman as presiding bishop, a position similar to the Pope, she said that was “it” for some of the dioceses.

Hardaway, who has a theater degree, said it was her idea to move the church to a theater.

“We signed [a rental] agreement, and we came here to worship almost 13 years ago now. And we’ve been here ever since, and we’ve had a wonderful relationship with the theater,” Hardaway said.

Hardaway recalled one Sunday the theater was doing a production of “Urinetown” and next to the altar was a toilet.

Parishioner Jane Morrow Wright, who described herself as a “cradle Catholic,” first heard of the church during COVID after a friend encouraged her to watch the church on Facebook. She said it was exciting to her to feel welcome in places she had not been in a long time.

“This place just keeps you on your toes, it keeps you wanting to come back,” she said of All Souls.

After her husband died, Wright had continued going to her old church, but then realized she needed a change so she came to All Souls and has not once regretted making that change.

“Couldn’t get better than this,” Wright remarked. “I tell you.” n