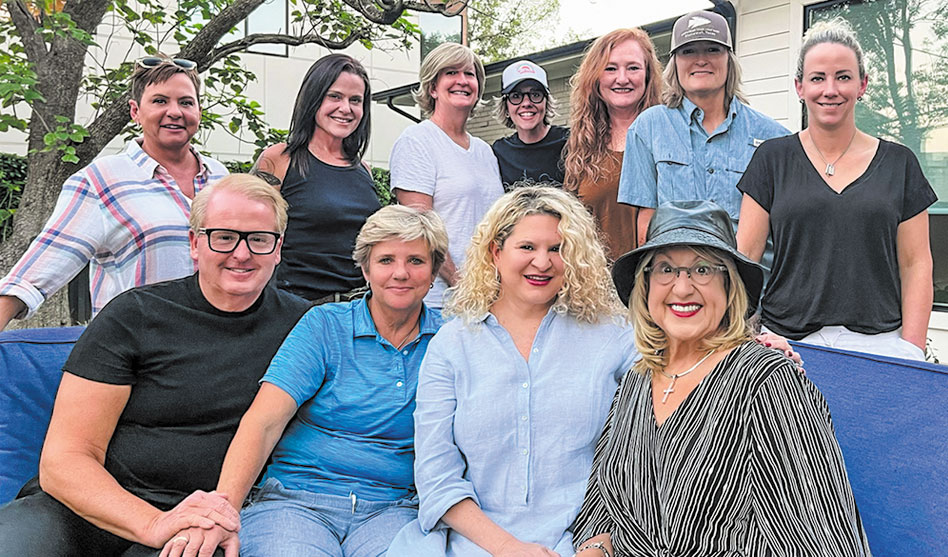 Dee Pennington admits that she knows absolutely nothing about golf. “I don’t even know what a birdy is!” she said. But she does know how to pamper golfers. Deiadra Burns knows all about golf. And between the two of them, they throw one heck of a golf tournament/party.

Burns and Pennington are, once again, co-chairs of the HRC DFW Fairway to Equality women’s golf tournament and Calcutta, now in its 25th year, happening Sept. 30-Oct. 1 and benefitting the Human Rights Campaign.

Burns explained this week that the tournament hasn’t been held since 2019 because of the COVID epidemic. So, Pennington, noted, “This year feels like a bit of a start-over. Everyone is still trying to recover, trying to figure out what year it is and what’s going on. But now we are getting a lot of attention. People are glad to be back.”

Burns agreed. “Everyone has been in that COVID fog, if you will, so they were a little slow in responding at first. But Dee and I teamed up to reach out to a lot of the past players and past sponsors, and people have really responded. I think if we don’t sell out, we’ll be very close to it.”

Fairway to Equality has “been around and benefitting our community for the last 25 years” as an HRC fundraiser, Pennington said. But the event in its current form evolved out of a tournament conceived by community legend Lory Masters first as a fundraiser for Oak Lawn Counseling Services, then for the Candy Marcum Institute followed by Uncommon Legacy Foundation, she explained. “HRC took over when Uncommon Legacy went away.”

Fairway to Equality has “net raised” $958,000 for HRC over the years, and “We fully expect to surpass the $1 million mark this year, which will be a great way to celebrate the 25th anniversary,” Pennington said.

While other HRC groups around the country have held their own charity golf tournaments, no one has managed to outdo DFW.

“There have been a lot of cities across the HRC organization that have tried to replicate what we do here, and they always do a good job,” Burns said. “But as the people who work for HRC always say, nobody does it like Dallas! I think it is the uniqueness of our community that makes this work. We play together well, and we stick with our mission to achieve equality for all of us.”

That goal, Pennington said, “was important back then when we started this tournament, and it is just as important now.”

Pennington and Burns have been involved for most of the tournament’s history.

“I still do things the old-fashioned way, counting on my fingers and all that,” Pennington said. “But then Deiadra got involved, and she turned this into a really slick machine. She really took things to a new level over the past 15 years.”

“Dee has all along been doing what she does best, which is getting people involved and raising lots of money,” Burns interjected. “We both came back to this a little rusty, but we work really well together. And we have a great group of people on our committee, too.”

Burns and Pennington have been reaching out, as they said, to past competitors and past sponsors. And the response has been great, they said.

“Ky Fiser of Ky Fiser Wealth Management has been our presenting sponsor for the last five tournaments, and they are back as presenting sponsor this year,” Pennington said. Burns added, “We have a lot of cash sponsors this year, too — people who are donating and not asking for anything in return.”

Pennington also reached out to Kathy Jack and Kristi Holman, asking them to return to their traditional roles in emceeing the Calcutta on Friday night before the tournament on Saturday, and they agreed. “We are bringing back the old guard!” Pennington declared.

The Calcutta, the two co-chairs explained, is what really sets Fairway to Equality apart from other charity golf tournaments. “Calcutta,” Pennington said, “was the first thing I ever looked up on Wikipedia,” going on to explain how the event works.

The idea is that each team of four competing in the tournament is “auctioned off,” during the Calcutta. Then at the end of the day on Saturday, everyone who put their money on the team that ends up winning gets to share in the payoff. It’s kind of like the 50-50 drawings that are popular at charitable events in Texas, in which individuals pay into the pot, then whoever’s name is drawn splits the pot with the charity.

That, Burns said, “is the definition of a Calcutta in the golf world. But in true LGBTQ fashion, we have turned it up a notch. We have a caddy auction, and, the third thing, we have some live auctions, too.”

The live auction items, Burns said, “are not the big, $10,000 packages you would see at Black Tie Dinner, but there are some nice getaways in there and other things, like some great art. Kristi Holman, for example, is donating a trip to Tulum, Mexico. We mix it up.”

The Caddy Auction is Pennington’s favorite part: “We get lots of different people from around the community to volunteer as caddies; we usually have the co-chairs from Black Tie and the other fundraising arms of DFW HRC who participate. The thing is, the caddies don’t really have to caddy. Like, I am a caddy, and I don’t know anything about golf. The idea is that the caddies go around with their team — bring them lunch or drinks or cooling towels, just do things to keep the golfers comfy and cool.”

As part of the “old guard” returning for the 25th anniversary, Pennington said she and De’An Olson Roper are returning as a caddy team for the auction. “We’re the Double Ds, and we both live up to the name!” she declared. “And [singer] Deborah Vial is coming in from Hawaii this year to be auctioned off as our celebrity caddy, and we’re going to try to talk her into singing a song for us.

Burns, laughing, added, “It’s a fun thing and a great way to raise money. Sometimes the caddy packages are a bit more robust, with tickets to an event or massages, etc. But I think people are using buying the personality that’s there rather than the package they offer.”

The Calcutta starts at 6:30 p.m. Friday, Sept. 30, at Sue Ellen’s, 3014 Throckmorton St., and admission to the event is free. The tournament gets underway with a shotgun start — “I don’t know what that is, either,” Pennington acknowledged — at 11 a.m. Saturday, Oct. 1, at Indian Creek Golf Club, 1650 W. Frankford Road in Carrollton. And, like Pennington, you don’t have to play or even known anything about the game to enjoy that part of the weekend, either.

“We’ll have a margarita tent that Caven Enterprises is sponsoring, and the martini girls are coming back, too,” Pennington said. “And we will serve everyone a beautiful meal when they finish their round of golf.

“It is a lovely day and everyone is invited to come hang out. Rent a cart and ride around. Or just hang out at the margarita tent — that’s where the fun is!”

Oh, and just so you know, Burns explained: A shotgun start is where each team competing is stationed at a different hole on the golf course and everybody starts at the same time. And a birdy is when a golfer completes a hole one stroke under par.

“I’ll write that down,” Pennington said, “so I can forget it right after.”