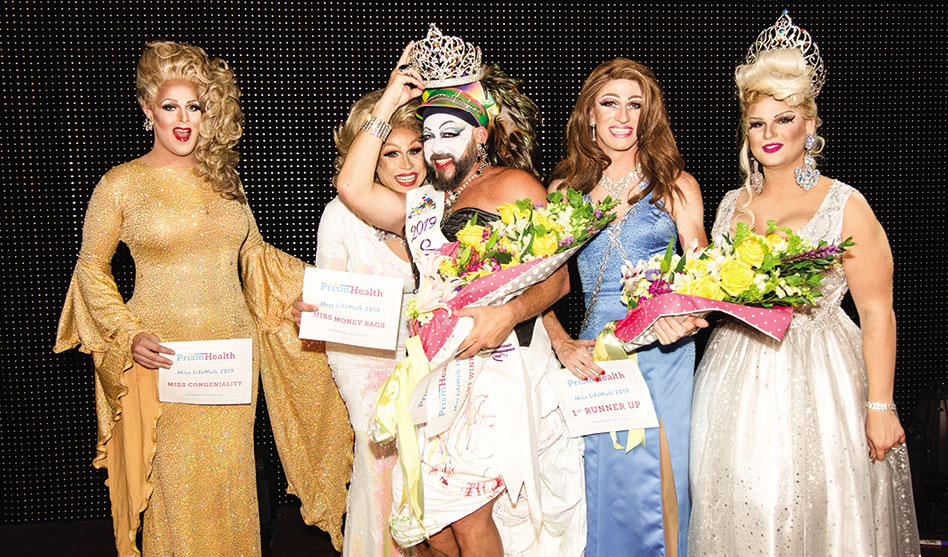 Pageant brings a close to Summer of LifeWalk

LifeWalk has looked a bit different this year: In lieu of the traditional 5K walk throughout Oak Lawn neighborhoods, this year’s fundraiser was a series of events dubbed the Summer of LifeWalk. And for the “crowning” achievement of the summer, LifeWalk organizer and beneficiary Prism

The pageant will conclude the 32nd annual LifeWalk, which raises money each year for Prism’s mission to advance the health of North Texans through education, research, prevention, and personalized HIV care.

“The shift in format has made this a successful and rewarding LifeWalk,” PHNTX Events Manager Terry Walker said in a press release. “We kicked off the Summer of LifeWalk with the Marketpalooza and Pub Crawl on the Cedar Springs Strip, followed by brunch with Pride Vodka at Roy G’s and the extremely successful seventh annual Team Clover Open hosted by long-time LifeWalk team Team Clover. Team Clover recruited 51 teams to play putt-putt and enjoy a silent auction in the name of Prism Health North Texas.”

While the walk itself is not off the table for the future, this year’s pivot was a new way to get people involved and reconnected with the event as well as raise donations for Prism’s services.

The feedback for LifeWalk’s new 2022 “look” has been positive, according to Walker.

“We’d got quite a bit of positive feedback doing this differently. It was a way to let the community know we’re still raising money and awareness and help to market Prism Health North Texas,” he said. “The events all worked so well.”

As for the future of LifeWalk, Prism is taking it one year at a time, Walker added.

“I do get asked if the walk is coming back,” he said. “All I can say is we are looking at ideas to have a moving event again and what that looks like, but we haven’t decided on a direction.”

Whatever it looks like, he and the Prism team would certainly like to see it, in his words, bigger, better and bolder.

Prior even to COVID, the event itself had somewhat plateaued and may have even suffered from its own longevity, Walker said.

“Walks were big in the ’90s, and some people may have been over those,” he added. “I’ve looked at other walks around the country, and they have changed. This year was a way to re-energize, re-invigorate and re-invent the event itself.”

But for now, it’s all about Miss LifeWalk, which will feature more than a pageant. The event will include recognition of the top individual fundraisers and top three fundraising teams.

To make up for lost COVID years, the annual Heart and Hands Award will be bestowed to 2020, 2021 and 2022 recipients, honoring those who have presented above and beyond dedication to LifeWalk and PHNTX. A Special LifeWalk Participant Recognition will also be awarded to one participant who has produced noteworthy fundraising results year after year.

“We look forward to closing this year’s Summer of LifeWalk with one of our favorite events, the Miss LifeWalk Pageant,” Walker mentioned. “Two years have flown by since the 16th Miss LifeWalk, Miss Polly von Ackocker, was crowned, and we look forward to the fierce competition and wonderful performances from local drag queens competing for the title.”

Competing queens, which include previous winners, will perform their own number and give remarks on their efforts to raise funds for LifeWalk in 2022 and in future years.

“It’s gonna be fun crowning a new Miss LifeWalk. Polly has had it for three years now,” he said. “And donations can still be made through Oct. 10 which will benefit certain services that have suffered,” the press release about the event noted.

As for what next year will look like, that is yet to be determined. But LifeWalk is intending to stick around: “What do we look like in five years? That I don’t know,” Walker said. “But we plan to keep the tradition going.” n