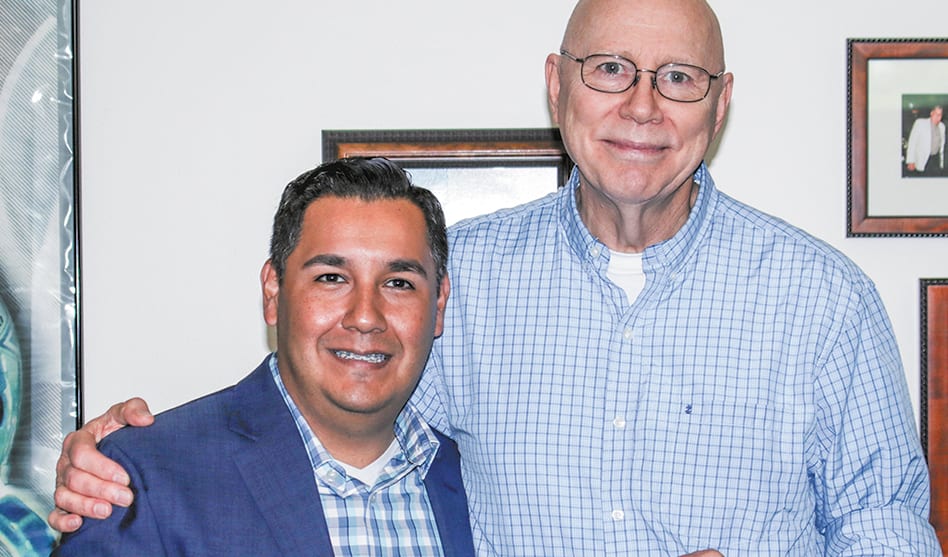 Jason Villejo, left, accepts a check for $100,000 from Harvey Meissner, president and general manager of
The Hidden Door, representing The Anthony Bobrow Trust.

As Dallas Hope Charities approaches its first anniversary, the organization is about to triple the number of beds in its LGBT shelter.

A year ago, Cathedral of Hope spun off some of its ministries and formed a new nonprofit organization that could take advantage of its secular and independent status while still benefiting from a strong relationship with the church.

Its first new project was a shelter for LGBT youth. The program is designed for youth ages 18 to 24 who may live at the facility up to a year. According to DHC Executive Director Jason Villejo, DHC began operating a two-bed house that helped six youth during its first year in operation.

Villejo is proud of one successful resident. DHC teamed up with the Year Up program at El Centro College, a 12-month program has a student take classes in IT or business for six months and then enters an internship program for six months. The internships are in partnership with local companies located throughout the city.

One student who was participating in the Year Up program found her grades slipping because of issues with unstable housing. El Centro contacted Villejo, who was able to offer a bed for up to a year.

That student is completing her internship at Top Golf’s corporate headquarters on Central Expressway, and she’s been offered a full-time job that will pay over $30,000.

Another resident is about to leave as well. That one was already working and living at home. When the family found out about their child’s LGBT status, they kicked her out of the house. Villejo said she needed a place to stay while saving paychecks to be able to afford her own apartment.

Villejo said two residents were on the waiting list for Promise House’s LGBT residence. Others were referred from City Square and other partners DHC developed over the past year.

He said a new two-bedroom residence will open over the next few weeks, allowing DHC to house four more young people at once, thanks to a recent $100,000 donation from the Tony Bobrow Foundation that made the new residence possible.

A part-time house manager has been hired who will do case management and keep residents on track to go out on their own within a year.

Another program DHC inherited from the church is BACH — Breakfast at Cathedral of Hope. That Saturday breakfast program currently costs $4,000 a month. Last year, it served 36,000 meals to the homeless. But, Villejo noted, “The breakfast program is struggling financially.”

Before, the program was supported by donations to the church. Now, on months with a fifth Sunday, a second offering plate is passed to support DHC.

But donations are coming from new sources. The United Court of the Lone Star Empire is raising money for the organization this week at one of its shows at the Hidden Door. The Dallas Bears recently gave the group a check for almost $900, and at Intuit in Plano, the company matched funds raised at an employee drag bingo and donated $2,400. And a newly hired grant writer is applying for funds from a variety of sources.

Villejo has focused the mission of DHC on feeding and housing those in need. As part of that focus, its logo was redesigned with a roof over the name and a fork in the “O” in Hope to signify home and meals.

Several programs such as tutoring at Maple Lawn Elementary across the street from the church have been turned back over to the church. Members who were working with students will continue to do so.

“We were too scattered,” Villejo said of the reason for that change.

With his new focus, Villejo said it will be easier to tell the story of Dallas Hope Charities and raise funds to keep its programs running.

To find out more about Dallas Hope Charities or make a donation, visit DallasHopeCharities.org.