Dallas Voice, 6 other publications join just-launched Word Is Out project 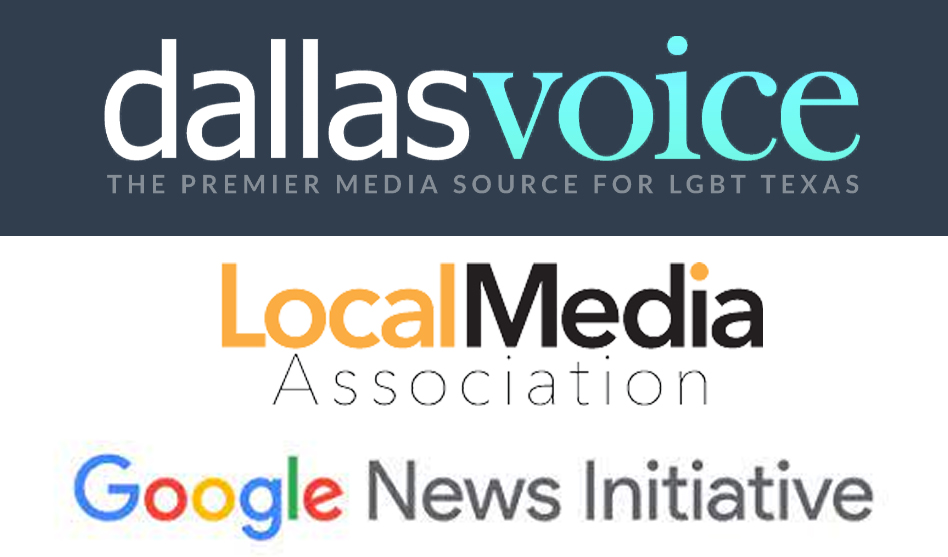 Dallas Voice is one of six LGBTQ publications that will be participating in the newly-launched project Word Is Out: The Queer Media Collaborative, a new LGBTQ media venture being funded initially by the Google News Initiative Innovation Challenge.

Local Media Foundation announced the launch of the new project on Tuesday, Nov. 16. Nancy Lane, CEO of Local Media Association, which will serve as the managing partner for the initiative, said Google News Initiatives is providing $200,000 the get the Queer Media Collective off the ground. That is the maximum for this current round of funding, Lane said.

The Queer Media Collaborative was created to focus on business sustainability and producing great journalism, which falls right in line with the mission of Dallas Voice, said Voice owner and publisher Leo Cusimano.

“As a community our agenda is equality. This collaboration, with help from Local Media Association, helps LGBTQ media have a seat at the table,” Cusimano said. “We are excited about elevating our in-depth, comprehensive reporting. Supporting local LGBTQ journalism is essential, and it is highly important for our community to have a voice.” S

Word Is Out marks the sixth news industry collaboration incubated by LMA and LMF. The collaborative will build on the successful model of Word In Black, which is made up of 10 leading Black publishers in America and which also receives funding from GNI.

The other five LGBTQ publications participating in Word Is Out now are San Francisco’s Bay Area Reporter, a weekly publication started in 1971; the online publication Q Voice News, which is the only digital-first LGBTQ news outlet in the greater Los Angeles area; the national publication Tagg Magazine, an award-winning Black and queer woman-owned publication founded in 2012; The D.C.-based weekly Washington Blade, which is the oldest LGBTQ newspaper in the U.S. launched in 1969; and Chicago’s Windy City Times, which was founded in 1985 and covers Chicago and its suburbs.

Ebone Bell, the owner and editor of Tagg Magazine who helped initiate the new effort, said, “We are so excited about this unique collaboration for LGBTQ media. This group of media has often been left out of national partnerships and is new to the philanthropic side of journalism funding. This provides a great opportunity to uplift and transform legacy and new LGBTQ media.”

The six publishers are still in the early stages of planning and setting goals. But noted that the group plans to hire a part-time project manager and will focus on audience listening surveys to better understand the needs of the LGBTQ community. Funding from Google News Initiative will cover the initial research and the role of the project manager.

The collaborative will also launch a national website and newsletter, supported by a membership model; sponsorships; branded content; and journalism funded by philanthropy. The publishers will look to expand the collaboration to include other LGBTQ publishers as funding allows, but lessons learned will be shared with all.

Chrissy Towle, head of news, Americas Partnerships Solutions with Google, said her organization is “thrilled to support the work of LGBTQ publishers through the Word is Out initiative. Queer media needs more resources to support their long-term sustainability. This project goes a long way in making that happen. We hope other funders will also step up.”

LMA CEO Nancy Lane added, “This project is extremely important to the sustainability of LGBTQ media. Our goal is to start with this small group of six and quickly expand. We’ll draw heavily on the learnings from Word In Black to guide our strategy.”

Word Is Out is currently seeking applicants for the position of editor/project manager for Word Is Out who will work closely with the LMA/LMF director of business strategy and partnerships, who is managing the collaborative. Because LMA/LMF is a virtual organization, applicants can live anywhere; they just need reliable internet access and access to a commercial airport. This is a part time position starting in January 2022. Minimum requirements and competencies include a bachelor’s degree and experience covering LGBTQ issues or working at a publication that primarily covers an LGTBQ audience.

Anyone interested can send a resume and cover letter describing their interest in the position and including contact information for three professional references via to jobs@localmedia.org. Deadline to apply is Dec. 15, and no mailed applications will be accepted.