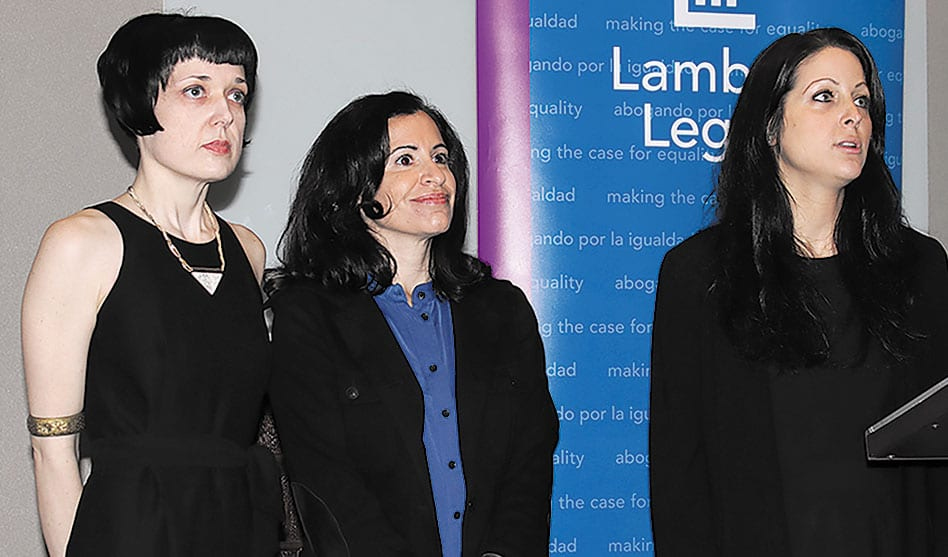 Lambda Legal and Americans United for Separation of Church and State on Tuesday, Nov. 16, opposed an effort by the U.S. Government to put their lawsuit on behalf of Fatma Marouf and Bryn Esplin on hold indefinitely based on the U.S. Government’s assertion that it was intending to change its relationship with the United States Conference of Catholic Bishops at some unspecified time in the future. The USCCB refuses to place children in foster homes headed by LGBTQ people, even though the organization gets federal funding to administer its foster care program.

Lambda Legal filed suit in February 2018 on behalf of a married Fort Worth couple Fatma Marouf and Bryn Esplin, who were denied the opportunity even to apply to serve as foster parents for refugee children by a USCCB affiliate because the couple did not “mirror the Holy Family.”

The U.S. Department of Justice filed its motion last week in Marouf v. Becerra requesting that the judge suspend the litigation becausethe federal government proposes to contract with and fund a “third-party entity,” whose sole responsibility will be to identify and segregate LGBTQ foster parent applicants in the Dallas-Fort Worth area, and direct them away from USCCB’s sub-grantee to an alternative provider of federal child welfare services that purportedly would be willing to accept their applications.

Under such a plan, children in USCCB’s care would remain unavailable for placement in the homes of LGBTQ foster parents who might serve their best interest, Lambda Legal and AUSCS asserted, saying that LGBTQ prospective foster parents “would remain fenced out of participation in federal programs delegated to USCCB.”

Camilla B. Taylor, Lambda Legal’s deputy director for litigation, said government’s proposal “doubles down on the discrimination and harm caused when the federal government first sanctioned and enabled USCCB’s refusal to allow Fatma and Bryn to apply to foster a refugee child in February 2017. Years later, federal defendants now propose at the 11th hour to outsource the segregation of LGBT applicants to a third party as though this washes their hands of their responsibility to treat applicants fairly and without discrimination.

“Children in refugee camps or in group foster care settings deserve the chance to be considered for placement in the homes that best serve their individualized needs, without the categorical exclusion of certain families based on factors that have nothing to do with their ability to provide a safe and loving home,” Taylor continued.

Kenneth Uptown, senior litigation counsel for Americans United, added, “After years of watching HHS favor discrimination against LGBTQ people in various programs, we had high hopes that the new administration would correct course and right this ship — guided by constitutional principles of freedom without favor and equality without exception. The government’s insistence on clinging to a religious litmus test is not only deeply disappointing, but also should trouble anyone who cares about the welfare of vulnerable children entrusted to government care.” added Kenneth Upton, Senior Litigation Counsel for Americans United.