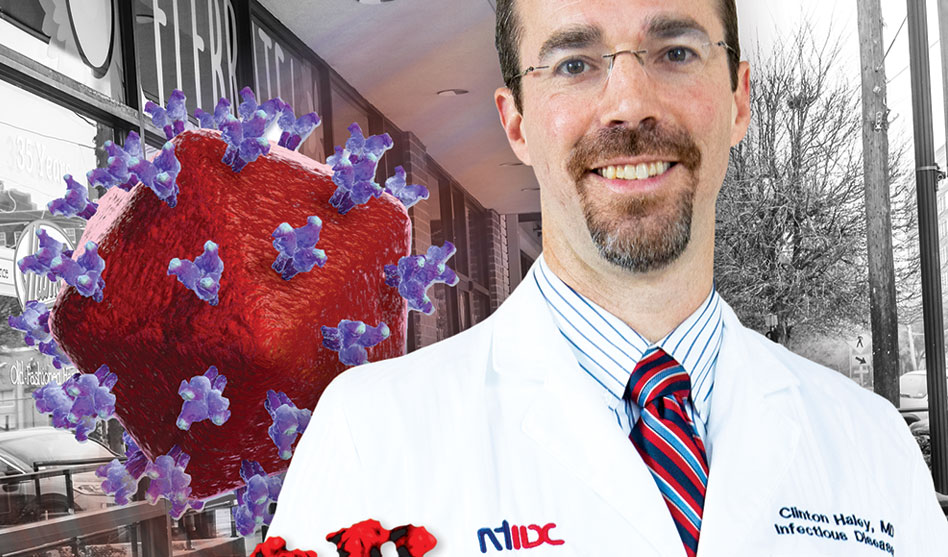 Dr. Clinton Haley talks about stopping the spread of coronavirus and who’s most vulnerable

“This is new territory for everybody,” said Dr. Clinton Haley of North Texas Infectious Disease Consultants.

He was talking about COVID-19 in general and its effects on people with HIV specifically. Even for someone who is successfully being treated with medication and whose viral load is undetectable, he began by saying, “Currently, there’s not enough information.”

But he also said there’s no evidence that a person with HIV is at higher risk. Still, people with a compromised immune system should err on the side of caution and take extra precautions. 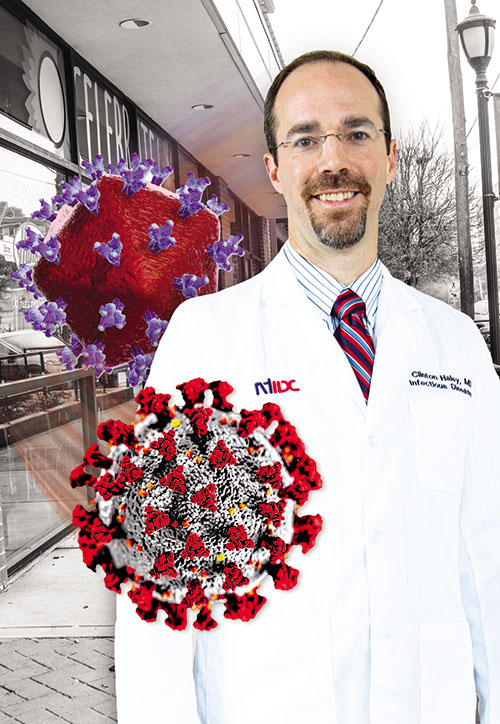 What is of concern are other factors that may affect people with HIV. Half of the population living with HIV is older than 50, and the death rate with COVID-19 increases for people in their 60s, 70s and 80s. The first fatality in Dallas County was a man in his 90s.

People with HIV are also at risk because of other conditions they may have, either related to or independent of their HIV. Those with high blood pressure, heart conditions, diabetes and cancer, especially those undergoing chemotherapy, are at higher risk of serious illness from the coronavirus, according to the Centers for Disease Control.

Here’s what’s interesting about any possible treatments: Many of the drug trials involve medications developed for HIV or as a result of HIV research.

In Australia, trials of a two-drug cocktail of the malarial drug Chloroquine and the HIV medication Lopinavir have begun. Trials of Gilead’s antiviral drug Remdesivir have begun in China and at the University of Nebraska Medical Center and, according to Dr. Haley, will begin soon in Dallas.

Remdesivir is in the class of nucleotide analog antivirals that have been used in treating the Ebola virus and the Marburg virus that works by hindering entry of the virus into cells making replication inside the body harder.

So, HIV medications may have some effect protecting people from coronavirus, we actually don’t have any proof of that yet, and the drugs in the trials are not those most people with HIV are taking.

To keep people with HIV from contracting the virus, Dr. Haley said those HIV-positive individuals should be very careful about practicing social distancing. He called that the most effective defense we currently have against the virus.

“Don’t forget usual health maintenance,” he said. That includes getting a flu vaccine and, for people 65 and older, a pneumonia vaccine.

The latest evidence is that Coronavirus can travel more than six feet, so cover a cough or sneeze. The virus can live on a surface up to 45 hours, so wash carefully — but be careful what you touch after that. Washing is useless if you handle a doorknob that has the virus on it immediately afterwards. And Dr. Haley said using a paper towel from the bathroom may only offer a small amount of protection.

If you are suffering from flu-like symptoms, call your doctor. For a respiratory illness, an emergency room will be more prepared to treat you than your doctor. And visiting your doctor’s office could infect the office and pass the virus along to all of that physician’s other patients.

For an emergency room visit, Dr. Haley suggested calling that ER in advance.

One reason this virus is easier to pass along to others is the period of contagion. Dr. Haley said that with the 2003 SARS outbreak that peaked with 8,000 cases, you knew you were sick quickly. With COVID-19, you may show no symptoms for up to a week. And even then, symptoms may be mild before more serious respiratory illness appears. Some people won’t get very sick from the virus, but they can still spread it if they have it.

Dr. Haley called this week’s closings of bars, restaurants, theaters and gyms a step in the right direction, although he would prefer a coordinated approach throughout the DFW area. Tarrant County has limited occupancy in public places, but restaurants and bars are open, and no restrictions have been announced yet for Collin County and Denton counties.

If the U.S. is successful in lowering infection rates, and if any of the drugs in trial are successful, Dr. Haley expects to see a turnaround in three to four months. He said it’s possible there will be a seasonal subsidence as there is with the flu, but then we can expect COVID-19 to reappear next winter as the flu does.

It’s also unclear if this coronavirus lingers in the body and if so, instead of developing immunity, some people could suffer a relapse.

And what’s the safest way to patronize restaurants that are now only open for take out? Delivery avoids contact with other people standing in line but adds another set of hands touching the bag the food is packed in. A drive through window is probably the safest.