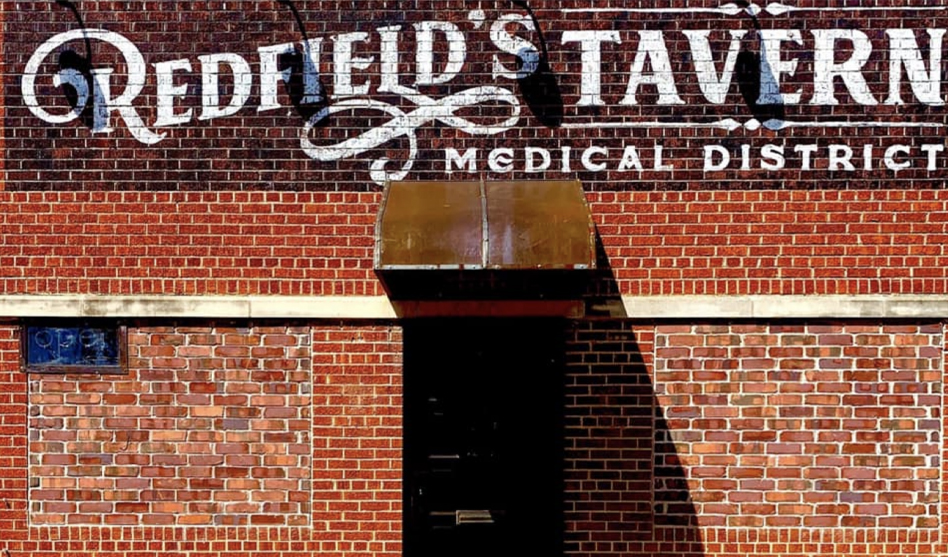 “The Ice House has no common partners with, any ownership of or any relationship to Redfield’s Tavern. The Ice House has many partners. We cannot control, nor are we responsible for a single partner that left the partnership over seven years ago.”

UPDATE: We have added the raw audio file at the end of this post. We are still going to find someone to clean up the sound and transcribe the tape.

Redfield’s Tavern, on Butler Street in The Medical District, had become a popular hangout for LGBTQ folks looking for somewhere to go after COVID-19 shut down The Strip. But the bar and grill quickly became the target of LGBTQ fury today (Wednesday, Oct. 21) after word began to spread on Facebook that Redfield’s owners were caught on tape saying their establishment is not a gay bar and they didn’t want any more gay people hired. 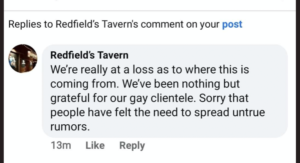 Someone with access to the Redfield’s Tavern Facebook page left this comment on a thread discussing alleged anti-LGBTQ comments made by Redfield’s owners. To be clear, I have personally listened to an audiotape of a conversation in which two owners definitely complained that the restaurant/bar’s general manager hired too many gay men, and I did ask Redfield’s management for comment via direct message on their FB page Within 30 minutes of that request, the page was taken offline.

We here at Dallas Voice can confirm that there is, indeed, a tape, and that two men can be heard on that tape telling the woman not to hire any more gay employees. The audio appears to have been recorded outside on a patio, and the background noise often obscures what the two men are saying. But there is enough audible conversation to confirm that the men are complaining about the number of gay men employed at Redfield’s.

Dallas Voice messaged Redfield’s via Facebook asking for comment about the rumors but received no reply. And within 30 minutes, the Redfield’s Facebook page was taken offline.

The person who sent the tape to Dallas Voice identified the two men on the tape as “two of the owners, Joe and Scott,” and the woman as “Lindsay, the former GM, who left in protest.”

After the woman, commented that “this week’s been slower,” Man 1 says, “We are not going to try to be a gay bar to keep our business up.” She answers, “I know,” and he continues, “And I see it in the people that we are hiring. I see it (unintelligible) and it is very concerning to me because we are going to fail if, if, I don’t normally talk like this [with managers and staff] … because it gets complicated and there’s far more reaching implications than (unintelligible, something about sales).”

Woman interrupts and says, “I feel like we’ve hired people that are qualified more than anything. Because we needed better service. We got better service.” But Man 1 replies, “I’m not hearing that the people we are hiring are really adding much as far as quality service … . That’s the feedback that I’ve gotten from people.”

The woman then asks, “So how do you want us to handle that? What? Fire everyone?”

Woman: “We have three new ones.”

Man 1: “We are getting lots of feedback … . We’re gonna fail… . Long-term prospects are that we face a gigantic failure… .” The voices are drowned out for a bit by background noise but the general implication is that the owners are telling the female general manager that there are too many gay men working there and customers don’t like it, and if that doesn’t change, the business will fail.

The woman says that she had been told if Redfield’s were a gay bar, “What we are selling in a week we could be selling in a day.” She says “We are not trying to make the staff gay,” to which one of the men replies, “Yes you are.”

The woman tells the men “If the gay crowd gets wind that we don’t like gay people, we will have NO business,” to which Man 1 replies, “How will they get wind of that?” She answers, “Well if we are not allowed to hire any men — straight men, gay men.” She also says that no one was hired because they were gay; they were hired because they were qualified.

Again, the men’s voices become unintelligible, but they are apparently telling the woman that there are two many overtly gay men on staff because she says very clearly, “They are not overtly gay. Your wife made an overtly rude comment to one of our bartenders because she thought he was straight. So they are not obviously gay.”

Also on tape, one of the men says, “If we hire someone and they don’t fit our image, either they won’t be on the schedule or we will fire them,” and “We are going to go through the staff.”

There is more, but again, back ground noise makes some of the conversation unintelligible. But there is clear conversation to indicate that the owners of Redfield’s Tavern were, indeed, complaining that their general manager had hired too many gay men, and they did clearly say they did not intend for the business to be a gay bar.

We’re sure there’s more to come, and we will update this post as we learn more.