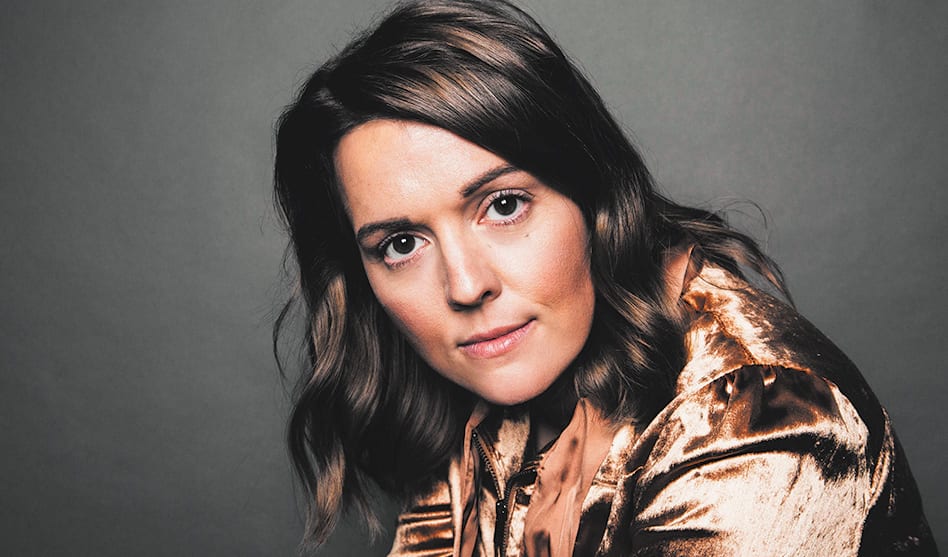 Brandi Carlile knew the kid from somewhere. She’d seen him before — not this particular one, but others like him.
Nervously pulling at his T-shirt, worn under a chic blazer that stuck out amid a sea of casual tracksuit bottoms and hoodie sweatshirts, Carlile recalls, “He just wanted to disappear inside of it.”
“It’s a lot of kids — it’s all of us,” the Grammy-nominated singer-songwriter laments, offering the impetus for her transformative orchestral-augmented rouser, “The Joke.” Carlile’s impassioned ode to queer kids soars during its pick-you-up chorus, when a tender tip-toe of piano balladry erupts into a fiery rocker with Carlile’s Chrissie Hynde-level wail, enkindling the spirit of all that is empowering and celebratory about individuality.
Here, Carlile — openly gay, and once an “eccentric” kid herself — is a galvanizing boost of encouragement, lifting the outsiders, the outcasts, the unwelcome, the kids in blazers, a young girl who still dreams of being the president to new enlightened heights on the sturdy wings of her robust voice. Her lived words help, too: Let ’em laugh while they can, let ’em spin, let ’em scatter in the wind / I have been to the movies, I’ve seen how it ends, and the joke’s on them.
Growing up 40 miles outside Seattle, in the small town called Ravensdale, where her family lived in a single-wide, three-bedroom mobile home, Carlile transcended real life through the surrealist lens of 1984’s beloved childhood fantasy about a bullied outcast, The NeverEnding Story. (The auryn symbol — snakes biting each other — is tattooed on both of her shoulders, a testament to the film’s significance during her youth.)
Later, as an Elton John-enthused teen who came out at age 15 (in the album’s liner notes, she calls Elton her “constant muse” and “very clearly a living angel”), she discovered queer cinema, first watching the pioneering AIDS drama Philadelphia, then buying the soundtrack. She learned Neil Young’s “Philadelphia” and Bruce Springsteen’s Oscar-winning theme song, “Streets of Philadelphia,” on the guitar. The soundtrack also introduced Carlile to Indigo Girls, whom she’d later collaborate with on numerous occasions (she also collaborated with Elton, who plays piano on “Caroline,” from 2009’s Give Up the Ghost). Roy Orbison and the Carpenters came to her courtesy of 1995’s lesbian-inclusive road movie Boys on the Side, “another gay movie that hugely impacted me.”
In 2005, when Carlile was 23, that arsenal of folk-rock idols assembled a foundation for her own roots music: a polished self-titled collection of campfire sing-alongs with mass appeal released on Columbia Records. Four studio albums followed, including 2007’s The Story, which elevated her musical profile and led to TV spots on shows such as Grey’s Anatomy and an Adele cover of the album’s hidden track, “Hiding My Heart.” Produced by Fort Worth native and Americana staple T Bone Burnett, Carlile let the rougher edges of her booming instrument catch the light, particularly during the title track, her voice a tsunami of raw, thrashing power.
But you’ve never heard Carlile quite like you do on By the Way, I Forgive You, an early contender for album of the year and her most accomplished, heartfelt set to date, her stunning voice carrying more weight than ever.
With Grammy Award-winning producer Dave Cobb, best known for his work with famed roots-music fixtures Jason Isbell and Shooter Jennings, who co-produces, Carlile hunkered down with twin bandmates Phil and Tim Hanseroth in Nashville’s historic RCA Studio A. In the same studio where Dolly Parton, Nancy Sinatra and Willie Nelson once recorded, Carlile went for the same kind of impulsive intimacy of her live shows, and she achieves it: This album most wholly captures Carlile as if she’s singing to you from across the room. Her front-and-center voice conveys an abundance of in-the-moment spontaneity, making it impossible not to envision tears she might have shed while singing the wistful standout among standouts “Most of All,” a touching tribute to her forgiveness-instilling father and her mother, who “taught me how to fight.” On “Whatever You Do,” her restlessness is manifested through her heavy-hearted timbre and a cathartic gut-punch of a scream. 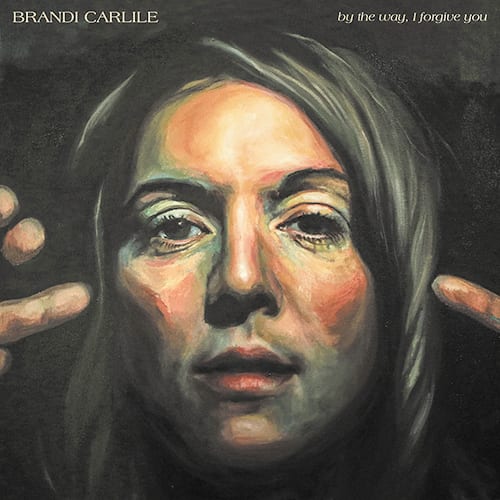 “[Dave] sent me out there and was like, ‘Just wail on the end of it and take half steps all the way up and just sing until you get to the end of it,’” she recalls. “I just kept holding the note out and letting it break apart and he loved it. It felt good, and I was really feeling the pain of that song and wanting to show that even though the lyrics had just ended and I had come to some kind of peaceful resolve, there was still a part of me that wasn’t letting it go.”
Fade outs are to be expected at a Carlile live show, but generally not on a Carlile album — not until Cobb insisted outros could exist in both places. With earlier albums, the set’s peace offering, “Party of One,” may have been cut just after her recurrent line of devotion, “I am yours, I am yours,” but the cinematic ebbing of a mounting string arrangement by the late Paul Buckmaster is soothing and graceful — a warm bath after a long day. “Harder to Forgive” flips the script midway, morphing a familiar backwoods Carlile sound into a pummel of drum-smacked, piano-flecked rock, marked by a tremendous vocal that, again, ends with a delectably charged howl.
“I’ve always been mild to moderately inconvenienced when making albums,” the singer admits. “I always feel like they’re kind of an uncomfortable break in my live journey, and Dave Cobb particularly really wasn’t having that. He was not impressed with that at all, and he started asking me uncomfortable things like, ‘How have you never made an album that’s as good or unabashedly kind of what you do on stage live?’”
She has now. Nearly 15 years into their recording career, By the Way, I Forgive You is a thrilling sonic turning point for Carlile and her band, with the revelation that their live presence can indeed translate to the studio.
“I just always thought of myself as two different artists — there was a recording artist and a live artist, and it’s not the case,” she explains. “There are a lot of things I would record differently if I could go back and do it now, but I don’t know that I should because it’s like trying to change what you were wearing in a photograph in the ’80s – you kind of don’t want to because it captures the moment. Even if I had affectation in my voice or even if I was crowd-pleasing with some of my lyrics now and then, it was still where I was emotionally at that time.”
Carlile is 36 now. She’s a wife (to Catherine Carlile, whom she married in 2012) and a mother. And with that, the desire to nurture and be nurtured in a time of political discontent and total world chaos is apparent both in conversation and on the tender, soul-nourishing surface of these vulnerable compositions. Family has changed her.
“I’ve been a lot more honest with myself about what’s worth writing about and what’s not worth writing about and what my motive is,” she says. “Do I care anymore about mass appeal? Do I care about universality if it’s not moving people?”
The answers are clear on By the Way, I Forgive You, as she turns her artistry outward and shines some light on the people who need it most: kids in blazers, a forgotten Jane Doe (I’ll always save some room for you / I won’t let you get left behind) and Carlile’s own dear friend whose drug addiction cost him his life. Called “Sugartooth,” Carlile’s elegy for her late friend will resonate beyond its direct muse, with all castaways, when she offers a hard truth: “What in the hell are you going to do when the world has made its mind up about you?”
Since 2008, Carlile has enriched marginalized lives through the charity she co-founded with the Hanseroth brothers, called the Looking Out Foundation, which funds oft-overlooked causes and organizations related to the arts, gender equality and civil rights. Now more than ever, her music pledges the same: to give a voice to the voiceless.
“At the end of the day, the thing that I’ve learned the most since having Evangeline [her daughter] is that everybody is somebody’s baby,” she says. “I know that should just be a given and we should just know that, but for some reason I don’t think I did know it until I had one.”
Addressing parenthood as a lesbian mom, “The Mother” is a love letter to her nearly-4-year-old daughter, with an irrefutable declarative statement sung during the chorus — I am the mother of Evangeline — that suffuses undeniable humanness into its significant political assertion. “The world has stood against us, made us mean to fight for you,” she acknowledges, pointing to the queer parent struggle. “And when we chose your name, we knew that you’d fight the power too.”
With By the Way, I Forgive You, Carlile’s show of compassion and mercy — passed from her parents down to her and now her daughters (Elijah is on the way), as the album’s threaded narrative goes — challenges that same power by merely existing. The message here is one of love: the love we learn, the love we lose, and the love we leave.