A new entryway for a new era 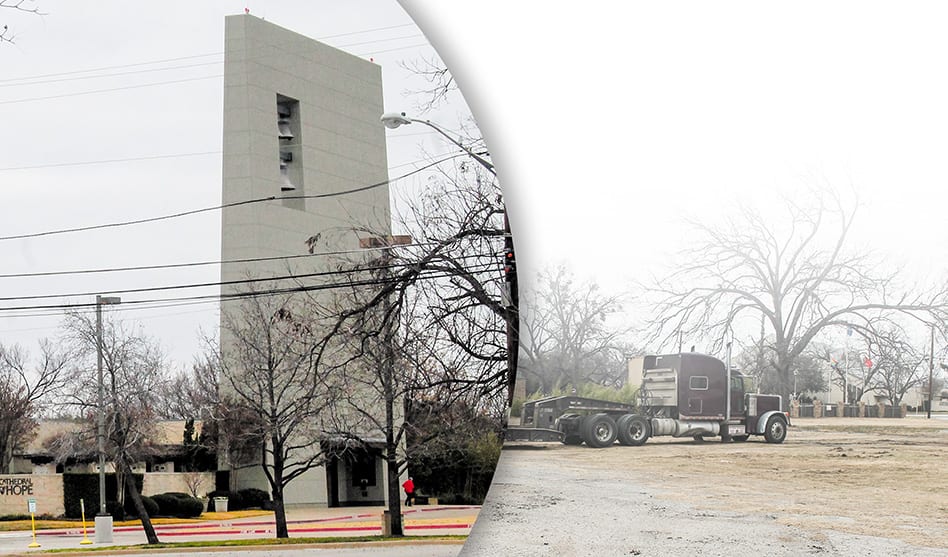 DAVID TAFFET | Senior Staff Writer
taffet@dallasvoice.com
Cathedral of Hope will break ground this weekend for a new entryway into the church grounds, and church officials say the new entryway marks the beginning of a new era for the church.
Cathedral of Hope has never had its own formal entrance, from either Inwood Road or Cedar Springs Road, although there have always been three ways to get onto the church property.
One entrance from Cedar Springs Road goes through the doggy daycare parking lot. That building was a Ruth’s Chris Steakhouse when Cathedral of Hope was first built. Although someone else owns that building, the church owns the driveway.
The two other entrances are both off Inwood Road. One is marked by a sign, and that entrance zigzags through a car dealership. The other is down Nash Street. The Nash Street entrance is marked by a Jack in the Box on one side and a Taco Bell on the other.
When the church was built, the street was residential. Those houses are long gone and the road has been abandoned by the city. Although Nash Street is no longer an official city street, Dallas hasn’t blocked the right-of-way as it would normally do when it abandons a road, so congregants still use that entrance.
Since Resource Center opened its new building at 5750 Cedar Springs Road, a fourth entrance to the church grounds has been created through its parking lots. But none of those entrances go directly into the property, and just finding the church can be a problem at times for newcomers.
The new, formal entryway will solve that problem.
It will be located along Cedar Springs Road, between Resource Center and the doggy daycare. In the initial phase of construction, the entry road will connect Cedar Springs Road and Nash Street and will be known as Covington Way, honoring former church employee Lee Covington.
Covington, who served as assistant to senior pastor Neil Cazarez-Thomas as well as his two predecessors, was murdered in his home last summer. Yevin Rushing, 22, has been arrested and charged with Covington’s murder. Rushing had had several of Covington’s belongings in his possession at the time of his arrest, including Covington’s keys and Rolex watch.
Rushing was arrested when he drove to Covington’s house in a U-Haul just hours after Covington’s death, presumably to empty the house. He remains in Dallas County Jail awaiting trial.
A monument will be built at the corner of Covington Way at Cedar Springs Road and will, Cazares-Thomas said, be named for Robert Trost, a long-time CoH member who died 18 months ago and left $1 million to the church. Half of that money went into a long-term endowment, and half went toward the new master plan for the church complex.
Implementing the master plan began with long-overdue repairs, including repairs to the roof. “The bell tower was leaking like a sieve,” Cazares-Thomas said.
Other improvements included fixing sound problems in the Interfaith Peace Chapel, a problem since the building opened, and buying new furniture for that building.
The first phase of construction on the road and monument should begin soon after the groundbreaking.
Weather permitting, the church hopes to complete the work by Easter Sunday.
The cost of the first phase of construction is $395,000 with $315,000 already collected. Selling bricks is one way the church will raise the funds.
“We’ll also be making personal asks of people for whom this has been a dream in the making,” Cazarez-Thomas said.
The next phase of construction will be to extend Covington Way behind the Interfaith Peace Chapel into the main parking lot.
When that’s completed, the road between the church and chapel will be closed to traffic and turned into a landscaped plaza. The driveway through the doggy daycare would become a service entrance that would only be used by staff to access employee parking.
Other long term plans include using some of the property for senior housing, homeless youth housing or community space. Any of those proposals would be in conjunction with other organizations and possibly the city.
A proposed Philip Johnson-designed cathedral, of which the Interfaith Peace Chapel was just a small piece, is no longer part of the church’s master plan.
“Multipurpose space is more important than space just used on Sundays,” Cazarez-Thomas explained.
Cazarez-Thomas called the new entrance “a new entryway for a new era.” He said when the church was built, it was purposely secluded and without a sign marking its presence.
“In the early days of this congregation, there was a notion of security, of not being seen from the street,” he said.
But today, the church is often a wedding destination attracting out-of-town guests who have trouble finding the building.
The monument, which includes “Cathedral of Hope” written on both sides, should fix that.
Groundbreaking begins at 3 p.m. on Saturday, Feb. 17. Enter through the doggy daycare, car dealership, Nash Street or Resource Center.