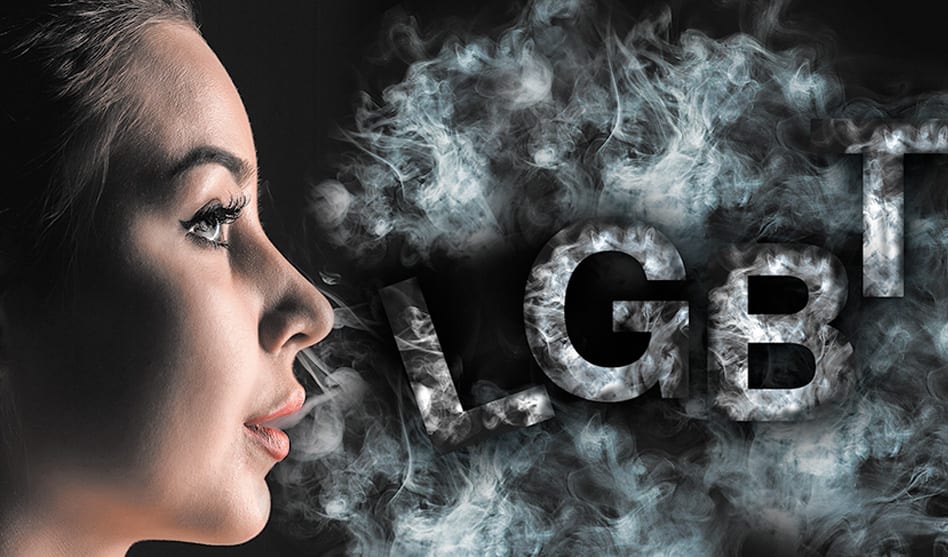 DAVID TAFFET | Senior Staff Writer
taffet@dallasvoice.com
Smoking has decreased among the general population in the U.S., from 42 percent of all people in 1965 to 15 percent in 2015, according to a new study released by the American Cancer Society.
But despite the overall decrease, a much higher percentage of LGBT are smoking than are heterosexuals.
In his study “Who’s still smoking? Disparities in adult cigarette smoking prevalence in the United States,” Jeffrey Drope, vice president of economic and health policy at the American Cancer Society, found a number of reasons LGBT individuals smoke more. Those include the stress of living in a hostile society, advertising targeting the LGBT community and promoting tobacco products in gay bars.
Overall, Texas has one of the lowest rates of smoking in the U.S. and, in Dallas, smoking is prohibited in bars. A similar ban was recently enacted in Fort Worth.
Dallas Tavern Guild Executive Director Michael Doughman, who coordinates the Pride festival and parade each September, said tobacco companies do not promote their products at Dallas Pride.
“Early on we declined,” Doughman said. “And they haven’t approached us in 10 years.”
Smoking rates across the U.S. vary based on a number of factors.
Smoking is higher among economically disadvantaged people compared to wealthier people. Among racial groups, Native Americans have the highest rates of smoking, and Hispanics have the lowest. Those with college degrees smoke less than those without.
And the LGBT community smokes at a much greater rate than heterosexuals — with one big exception.
When smoking is broken down based on sexual orientation, men smoke more than women in each category. More than 30 percent of bisexual men and women report they smoke, and a little more than 25 percent of gay men and transgender men report they smoke.
On the lower end, more than 15 percent of heterosexual men smoke and a little less than 15 percent of heterosexual women smoke.
But the surprise is that just over 10 percent of transgender women report they smoke, the lowest among all categories studied.
Drope said that particular statistic stood out to his team, as well. Their first thought was either a reporting problem or a low sampling. However, 72,000 people were interviewed for the survey, so a number of trans women should have been included in the sample.
Dallas Voice called a number of trans women locally, as well as the National Center for Transgender Equality. The response was universally the same as the one we got from local trans activist Leslie McMurray: “I don’t know of any who smoke,” McMurray said.
In Dallas, smoking is prohibited in bars and tobacco products are not promoted at Pride or other LGBT events. McMurray said the trans community is rarely targeted for any marketing, anyway.
“We go under the radar,” she said.
But the third reason people smoke is stress and societal pressure. In addition to anti-LGBT hostility, trans women lose any male privilege they previously had when they transition. But trans men, who gained that privilege when they transitioned, are more than twice as likely to smoke as trans women.
Drope said he’d like to see a study that looks into the lower rates of smoking among a few groups like trans women and Hispanics to learn how certain cultural norms somehow insulate some groups from smoking.
Despite the downward trend in smoking throughout the U.S., Drope said 40 million people still are addicted to cigarettes.
“Thirty percent of all cancer deaths are smoking attributable,” he said.
Most people associate lung cancer with smoking, but 16 forms of cancer can be triggered by tobacco use, including breast, colon, prostate, cervical, bladder, kidney, stomach, liver and a variety of cancers of the mouth and throat. Smoking related cardio-vascular diseases are even more likely to occur.
Texas has a lower rate of smoking than any of the surrounding states. Drope attributed that to high risk factors in surrounding states.
New Mexico and Oklahoma have large Native American populations. Louisiana is a much poorer state than Texas. Arkansas, Kentucky and West Virginia, all with lower socio-economic levels, have the country’s highest smoking rates.
In Texas, our large Hispanic population factors into our lower smoking rate. So do regulations in Dallas and other large cities that prohibit smoking in public places.
Dallas had one of the first — if not the very first — no-smoking ordinances in the country. In 1964, a fire swept through Neiman Marcus in downtown Dallas, causing $10 million in damage. The fifth floor was gutted, according to news reports from the time, but smoke and water damaged merchandise throughout the store. In response, the Dallas City Council banned smoking in retail establishments.
That history of no smoking locally may contribute to the lower smoking rate in Texas.
While Drope said he didn’t have the statistics, it made sense that in states with lower rates of smoking, LGBT smoking rates were correspondingly lower as well.