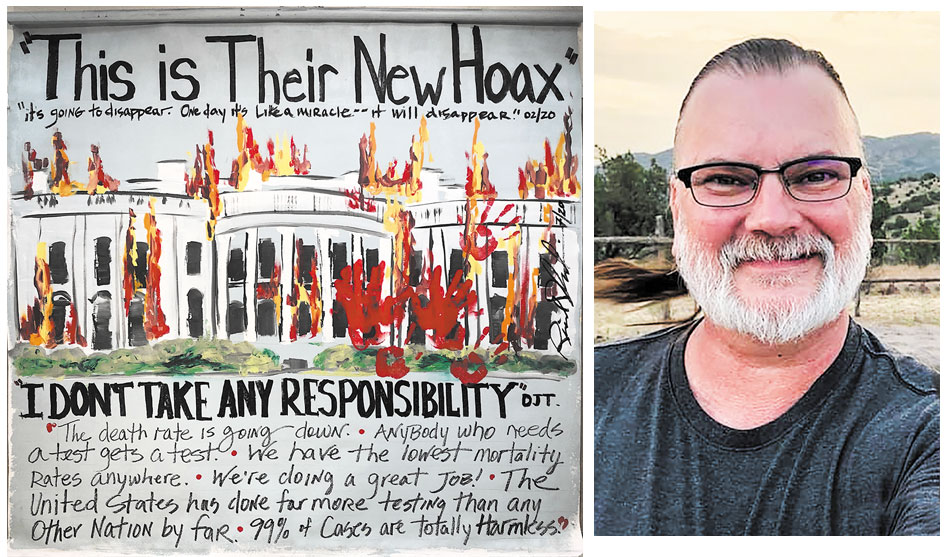 Richard Curtin’s painting started out as commentary on the Trump administration’s lies about COVID-19; Jan. 6 gave it new meaning

Early last summer, when COVID-19 was still a “new” thing, artist Richard D. Curtin, formerly of Dallas, was invited by ChunkArtsStudio & Gallery host and founder Lori Griffin to participate in “a unique exhibition/installation” to be featured in the Fort Stockton gallery. It was to be a 3D installation called Covid-19 2020.

Starting Aug. 18, the public was able to see the 3D installation at any time by going to the venue, at 107 W. 1st St. in Fort Stockton and viewing pieces through the windows at any time. Also starting on Aug. 18, pieces were added weekly until the one-time walk-through opening on Sept. 4.

The exhibit included Curtin’s work — “This is their new Hoax,” a 60-inch-by-65-inch latex and acrylic painting on canvas.

“In July, my response as an artist to Covid-19, initially, was that Donald J. Trump was a liar,” Curtin said. “He lied about all of it. He had weaponized the truth since March.”

His painting for the exhibit expressed that belief.

Curtain had, from the beginning, taken the pandemic very seriously. “I made a decision very early that my family would obey all guidelines. All social distancing requirements, mask wearing, stay at home orders and, just plain and simple, quarantined living.”

When the shut down started, Curtin said, he would meet virtually with a group of artists he had been painting with every Tuesday and Thursday evening from 6-8 p.m. They agreed to photograph their work every after 15 minutes, after one hour and after two hours when the work was finished.

They then shared their photos with each other via a Facebook group page.

Thus was born The Quarentini Painters, a group that started with five and is still painting together. Now, Curtin said, the group has “a couple of dozen people” following it, and the group is growing.

“As a gay artist, I approach many of the topics with that in mind, portraits of my partner, drag queens — my main focus for portraits — our animals and, in general, my life,” Curtin explained. “I feel it so important as not only a gay artist, but as a gay Dallasite, a gay Texan that our collective voices be heard, even through art.

“We are being attacked every day by [the Trump] administration,” he continued. “And lies hurt us all! In July 2020, the number of lies that Donald J. Trump had told was huge, and those lies were being called ‘alternate facts.’ Alternate facts? Lies! Call them lies!”

Curtin said he was “outraged” that Trump was not being called out more adamantly for his lies, that he was not being held accountable for his lies. “Why is this happening?” he wanted to know. “What has happened to truth?

Trump needed to be called out, and Curtin decided that his painting would do just that. So he created a painting that showed the White House in flames, surrounded by Trump’s lies.

Then, at the September opening of the Covid-19, 2020 exhibit, Curtin’s work evolved, and he documented that evolution on video.
“My name is Richard Curtin,” he began. “I believe in science. I believe in truth. And Donald Trump has blood on his hands!” Then he turned, dipped his hands in red paint and “assaulted my painting with my blood-stained hands, leaving behind my blood-red hand prints on the fire-engulfed White House painting. The new title? ‘Donald Trump has blood on his hands.’

“Just like the installation has evolved and grown, so has my painting,” he said. “How many people have to die for this administration to care? How about the GOP? We continue to be divided because truth, reality and morality are also being divided.

“I feared for my equality. I feared for my safety,” Curtin continued. “I feared that a virus, now weaponized, would kill me, my partner and his 94-year-old Mother that lives with us, just because people believed ‘their rights’ and ‘their freedoms’ were more important — because they had Jesus and Donald Trump on their side.”

Curtin admitted, “I haven’t had this much fear since the AIDS crisis in the ’80s, when Ronald Reagan’s apathy toward gay men and the AIDS crisis caused more death and created apathy and stalled awareness and treatment.

The COVID-19, 2020 exhibit came down in November. But Trump’s “lies and his ‘alternate facts’ continued assaulting us every day,” Curtin said. “The election has come and gone and the lies have gotten greater, more harmful and more egregious. But [the support from Trump] hasn’t faltered either, and my sadness about his support has grown deeper.

“My own family is divided,” he said. “I have a brother completely devoted to Donald Trump. And the virus has marched on and into my family. My oldest brother, living in Dearborn, Mich., contracted the virus just before Christmas. Fevers and extreme headaches — the virus moved into his lungs, and he moved into the hospital for treatment where he works. He was moved to CCU and talks began to move him to ICU and put him on a ventilator. He was not ventilated though and began to improve on anti-virals and steroids.”

As his brother fought for his life thousands of miles away, Curtin said he was struck by “how helpless I was. I could offer nothing — very little support, except to answer the phone and talk to him — a 60-year-old man with no underlying conditions, an avid bike rider, now facing possible death.

“He was scared. I was scared,” he said. “My brother and I are a lot alike — built the same and have our mother’s weakest organ, our lungs! I am scared — scared of losing him, scared of the virus that would most likely kill me. I have underlying conditions that will make the virus hurt me greatly.

And where is the government? Too busy allowing a demi-god to lie to us and golf! Where are the vaccines? His ineptness has damaged the vaccine roll-out. Donald J. Trump continues to fail ALL of the American people, and he continues to fail as POTUS! Why doesn’t everyone see it? Why?”

Even after losing his bid for re-election, Trump continued to lie, spreading baseless conspiracy theories that the election was “stolen” from him. He went so far as to call the Georgia Secretary of State, demanding that the man, a Republican, “find” the 11,000-plus votes necessary for Trump to have won that state.

Trump even encouraged his most extremist supporters to gather in Washington, D.C., on Jan. 6, the day Congress was set to meet in a joint session to count once again the Electoral College votes and certify Joe Biden’s win. And on the morning of Jan. 6, Trump — along with his son, Donald Jr., lawyer Rudy Giuliani and U.S. Rep. Madison Cawthorne of North Carolina — spoke at a rally, basically inciting those followers to attack Congress in an effort to stop the certification of the vote. Five people, including Capitol Police Officer Brian Sicknick, were killed that day. A second Capitol Police officer committed suicide days later.

“The attack on our Capital was not a surprise. I knew it was coming,” Curtin said. “I am angry! I am sad! Trump continues to take no responsibility, and none is given to him by Republicans! That is an outrage! What happened on Jan. 6, 2021, was treason, unAmerican, and anyone that has an argument defending it needs to be held accountable as well, including Ted Cruz. He must be forced to resign. After all, Al Franken resigned over a photograph.

“When will the hypocrisy end? Hypocrisy — the theme of the last four years.”

That attack — being called insurrection and an attempted coup — suddenly gave new meaning to the painting Curtin had completed months before: “Now my painting conveys even more truth: The White House is covered with blood. Five people. Donald Trump has more blood on his hands, and he continues to lie. How is this happening? How are we ALL not appalled? How can any of this be supported?

“It is time [Trump] is held accountable — not only to him, but his supporters. The insurrectionists must be found and held accountable. The White House is on fire, and Donald Trump has blood on his hands! Again!”

But there is hope. Curtin said his brother is home from the hospital, and while he continues to have to be on oxygen and a simple walk to the bathroom leaves him exhausted, he is alive, and he is healing. Vaccines against COVID-19 are being administered. A new president and vice president — the first woman VP — will be inaugurated on Jan. 20. Georgia voters have sent two new senators to Washington, putting the Senate in the hands of Democrats.

“Finally, we will see an administration that looks like our community — diverse,” Curtain said. “I hope we will soon see a renewed interest in learning and higher education, but most of all I hope for a day of renewed morality where ‘alternate facts’ are just called lies, and wheretruth is vital and, once again, will set us free.”