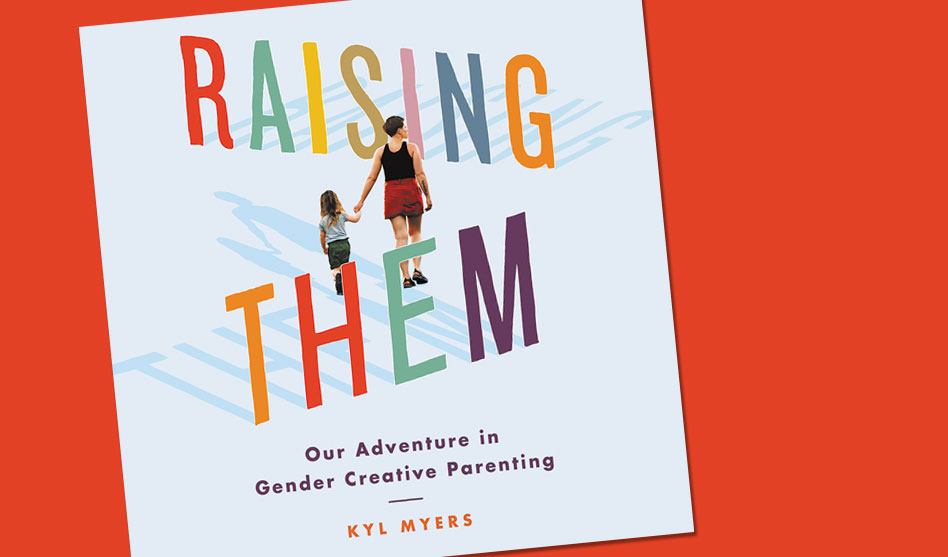 When you’re pregnant, everybody asks that question. What kind of clothing or toys will you require — dolls or trucks, pink or blue? They’ll want to know about the gender reveal party and what kind of names you’re considering. Do you want a boy or girl or, as in the new audiobook Raising Them by Kyl Myers, do you mind not knowing for a few years?

Long before she ever became a mother, even before she met and married her husband, Brent, Kyl Myers had thought about what she calls “gender creative parenting.”

Myers identifies as queer, and she was somewhat of an activist. So she was pretty well-versed on a subject that asks why we, as a society, place emphasis on the chromosomes of an infant when physical, often intimate, body parts have nothing to do with simply being a child. Once Myers was pregnant, this became more than just something to think about, and she and her husband decided to raise their child gender-free.

They weren’t the first to do so. In years past, other parents around the world went public with successful gender creative parenting. Still, it took plenty of determined pre-planning: Myers would deny knowledge of the baby’s gender to anyone who didn’t absolutely, genuinely need to know.

That meant restricting diaper-duty, and it meant four grandparents who wouldn’t know their grandchild’s gender until the child was several months old.

Once Zoomer Coyote entered the world, there would be no pink or blue bassinet cards in the hospital nursery. Myers had to learn to find non-gendered infant and toddler clothing for her child, gender-neutral-hued toys for them to play with and items that didn’t scream “Boy!” or “Girl!” Later, Zoomer’s daycare was “cool” with the neutrality, but strangers and even other parents were a challenge — and were nonetheless challenged to open their minds.

Raising Them will bring out a lot of emotions that will likely be dependent on which side of parenting you stand. It’s intriguing, but exhausting, too chirpy and too, too sunny. It’s also too precious by half, and the cute-Zoomer tales wear thin after a (very, very short) while.

And yet, the idea of giving your child time to know themself is intriguing. Still, author Kyl Myers should be commended for not throwing in the towel with hurricane force. Indeed, her struggles were exactly what you might expect.

Although — particularly if you’re expecting a baby — Myers may inspire you. Clearly, gender creative parenting involves work, vigilance and forethought, and while it’s not for everyone, it’s a compelling enough idea to stick in your mind like glue. You’ll be convinced that it’s worth a try, even if only sometimes.

And this: If you can’t rest without knowing, Myers drops hints to soothe your boy-or-girl curiosity, but that’s not the end of this story. No, this is a website-supported, mind-opening, ongoing tale for parents-to-be, or for anyone who wishes they’d been reared in a similar kind of household. That you? Read Raising Them, or you’ll be blue.