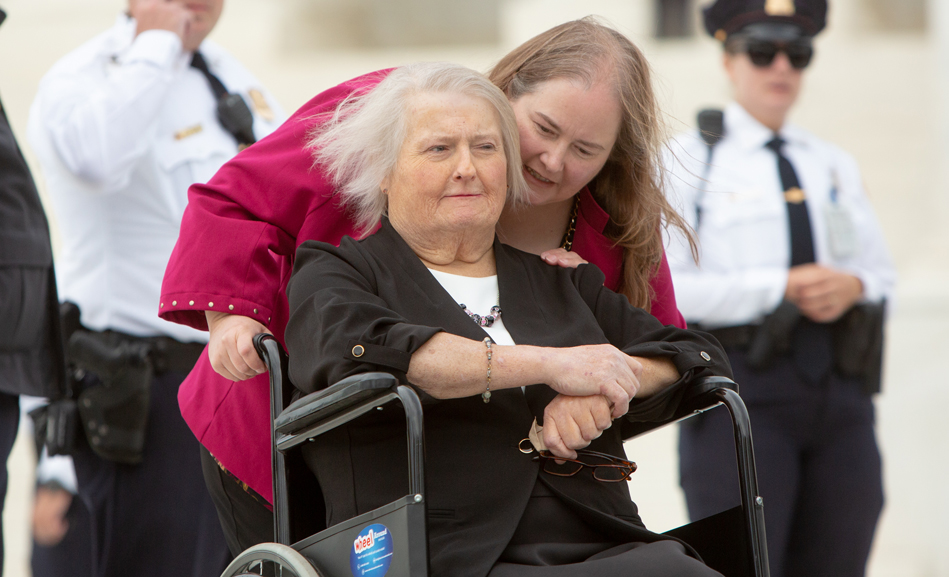 Aimee Stephens, in wheelchair, with her wife Donna outside the U.S. Supreme Court building in October 2019. (Photo by Allison Shelley)

Aimee Stephens, the transgender woman whose landmark case was the first case addressing transgender civil rights to be heard by the U.S. Supreme Court, died today (Tuesday, May 12) following a lengthy battle with diabetes. Family friends announced last week that Stephens had gone into hospice care at home after her conditioned worsened.

She died at her home in metro Detroit with her wife, Donna Stephens, at her side. She was 59.

Chase Strangio, deputy director for Trans Justice with the ACLU’s LGBT & HIV Project and a member of Aimee Stephens’ legal team, said, “Aimee did not set out to be a hero and a trailblazer, but she is one, and our country owes her a debt of gratitude for her commitment to justice for all people and her dedication to our transgender community.

“When Aimee decided to fight back after she was fired for being transgender, she just wanted it to be acknowledged that what happened to her was wrong,” Strangio continued. “Being a part of Aimee’s team at the Supreme Court has been one of the proudest moments of my life because of the amazing person behind the case. As a member of her legal team, I am deeply sad for this loss. As a transgender person and an advocate, I am filled with both grief and rage that we have lost an elder far too soon. As we, and millions, carry her work for justice forward, may she rest in power and continue to guide us on this path.”

Strangio added, “Those who met Aimee know that her power is in her humbleness and sincerity. She has been an inspiration to millions around the world. We mourn with Aimee’s wife Donna, their daughter Elizabeth, and the millions who have been inspired by her.”

Donna Stephens issued the following statement: “Thank you from the bottom of our hearts for your kindness [and] generosity and [for] keeping my best friend and soulmate in your thoughts and prayers. Aimee is an inspiration. She has given so many hope for the future of equality for LGBTQ people in our country, and she has rewritten history. The outpouring of love and support is our strength and inspiration now.”

Stephens filed suit after she was fired from her job at R.G. and G.R. Harris Funeral Homes in 2013, two weeks after she came out as transgender to her boss. Both the EEOC and the Sixth Circuit Court of Appeals ruled in her favor, saying that the funeral home had violated Title VII of the Civil Rights Act. The funeral home appealed, and the U.S. Supreme Court heard arguments in the case last October.
A decision from the court over whether Title VII includes protections for LGBTQ people is expected at any time.

Mara Keisling, executive director of The National Center for Transgender Equality: “Aimee Stephens is a hero in the fight for equal rights for all people. Aimee was fired for being transgender, and she chose to stand up for herself and for all transgender people. She took her fight all the way to the US Supreme Court. Aimee was deeply committed to justice and fairness, and an incredible person. She has left us too soon. We send our deepest sympathies to Aimee’s wife, Donna, and to all her friends, families and supporters.”