A weird day for the Texas Lege 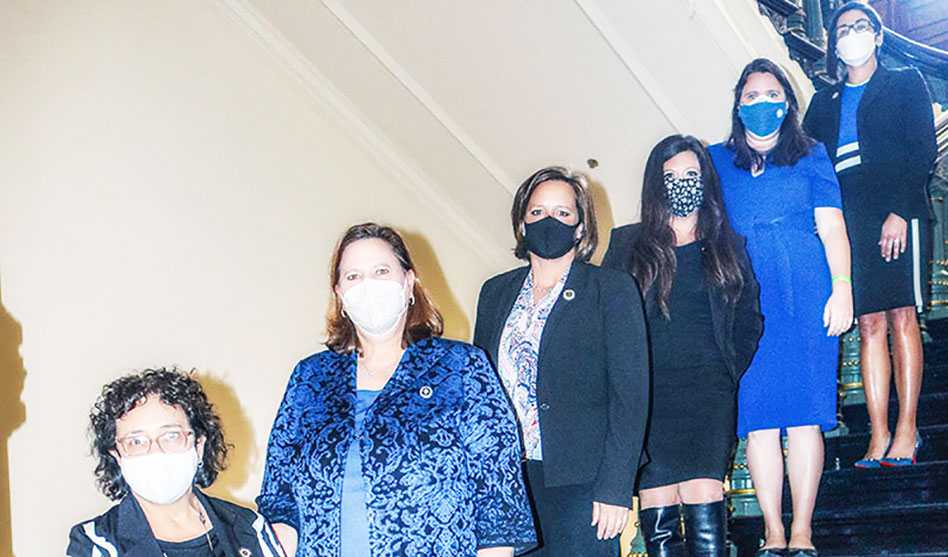 Safety guided the opening session of the Texas Legislature on Tuesday, Jan. 12, with precautions taken against the coronavirus as well as against threats from right-wing groups supporting President Trump. No one is allowed into the House of Representatives without a rapid COVID-19 test, and hundreds of state police are patrolling the Capitol.

The first sign anything was different than from a week prior, when a mob of Trump extremists attacked the U.S. Capitol during a joint session of Congress, was how many state police were walking around the Capitol grounds. Inside the state Capitol building, there were hundreds more.

On Monday, the officers were just getting to know the maze of hallways in the Capitol building, and rather than patrolling as an intimidating force, they were as friendly as any tourist walking through our awe-inspiring Capitol building for the first time. Especially confusing is the underground legislative office extension under the north Capitol grounds. In several cases, I gave officers directions.

On Tuesday, as all but a few legislators arrived for the opening session, Republican and Democratic lawmakers alike repeatedly greeted the troops filling the hallways, thanking them for being there. Both sides were united, agreeing there would be no repeat in Austin of what happened Jan. 6 in D.C.

Protests are a traditional part of the opening of the Texas Legislature. This year, though, I saw only two. On Monday, a small group gathered to press for the impeachment of Texas Attorney General Ken Paxton for his part in inciting the insurrection in Washington. 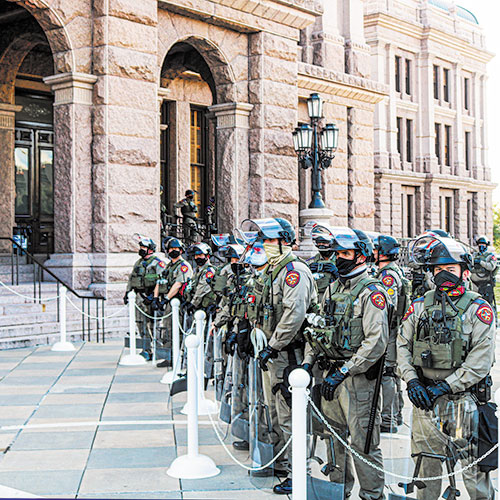 Paxton, already indicted on federal fraud charges and now under investigation for abuse of power, spoke at the Jan. 6 rally in D.C. before Trump. Speakers on the state Legislature’s steps also cited Paxton’s lawsuit to throw out votes in the presidential election in Pennsylvania. That suit was thrown out of court.

On Tuesday, several dozen protestors from a group called the Texas Freedom Coalition gathered outside the north entrance to the Capitol, calling for an end to coronavirus restrictions. They wanted no mandatory masks, no occupancy restrictions for restaurants and the opening of bars. Tougher restrictions are about to go into effect in parts of the state where 15 percent or more of hospitalizations are for COVID for seven consecutive days or more.

None of these protestors entered the Capitol to lobby their representatives and senators because everyone entering the building is required to wear a mask at all times.

Inside the Capitol, different representatives took different approaches to visitors. To protect their staffs, some kept their doors locked, allowing no one to enter. Some took visitors by appointment only. But since everyone who was going into the House chamber had taken a coronavirus rapid test and everyone wore masks, others felt safe to welcome visitors into their offices.

Greetings in the hall were mostly tentative. But when I saw Rep. Mary Gonzalez, the founding member of the LGBT Legislative Caucus, she opened her arms and gave me a virtual hug from a distance. We talked a minute, and I told her I had my vaccine and booster. (I’m participating in a clinical trial for the AstraZeneca vaccine that’s already been approved in several countries).

“And I had coronavirus,” she replied.

So we gave each other the only actual hug I saw during my stay in Austin, and because it was out in a main hallway, we did get some horrified looks.

Dallas City Councilman Omar Narvaez was in Austin as the sole representative of the city. He described the opening session as “watching a Zoom meeting but in person.”

Movement around the House floor was forbidden except by an individual who had to go up to the podium to speak. Normally, House members are allowed a guest on the floor for opening session. This time, only new members were allowed a guest. So Rep. Jasmine Crockett, who is taking the seat formerly held by Mayor Eric Johnson, was the only Dallas County representative with visitors on the floor.
Usually, media has free run of the House floor. This time, all journalists were seated in a specified section in the balcony socially distanced sitting every other chair. Not more than 20 reporters sat in the section, and one pool video camera supplied TV footage to news stations throughout the state.

Only one session was held. Normally a morning session ends with the election of Speaker of the House, followed by the appointment of a committee to announce to the Senate that the House is ready to conduct business. That is usually followed by an afternoon session where the governor speaks.
This year, tradition was out the window. Only one short session was held.

Rep. Dade Phelan, R-Beaumont, was nominated as Speaker of the House. Rep. Nicole Collier, a Black Tarrant County Democrat, who said that Phelan had co-sponsored a bill of hers during her freshman term that would have helped Texans who lost their health insurance, seconded. Several other reps seconded without delivering speeches, including Rep. Erin Zwiener, D-Driftwood, a founding member of the LGBT Legislative Caucus.
All members of the Texas House vote for House speaker rather than just members of the majority party as happens in Washington. Of the 150 members, 143 voted for Phelan, and two voted no. The others were absent, including one who resigned.

As Phelan addressed the House, he showed he has a sense of humor: “To my six brothers and sisters,” he said, “I am honestly Mom and Dad’s favorite now.”

While he said his agenda is protecting the public health and balancing the budget without hurting working families, Phelan joked that it took a pandemic for us to “finally figure out how to sell a margarita to go.” Look for that to become permanent during this session.
Phelan also mentioned streamlining or updating the legal code. The only portion of the code that the legislators routinely omit from their biennial updates is Section 21.06, the state’s sodomy law that was declared unconstitutional almost 20 years ago. This may be the session that the discriminatory wording will be removed from the books.

Finally, Gov. Greg Abbott spoke, and his speech was surprisingly short. He thanked law enforcement and spoke about the freedoms offered by the U.S. and Texas constitutions as well as getting Texans back to work. “Now, more than ever,” he said, “the U.S. needs Texas to succeed.”

Freshman Rep. Ann Johnson, a lesbian elected in November to serve a district that includes the Montrose neighborhood in Houston and who is the newest member of the LGBT Legislative caucus, called this a “wonderful start in a unique and historic time.” She said she loved being part of the caucus, and, now that she’s been sworn in, she will sign on to the omnibus nondiscrimination bill Rep. Jessica Gonzalez, D-Dallas, was about to file.
Until committee assignments are made in about a week, legislators will meet to decide on House rules and will have plenty of time to file bills.
Zwiener said she filed legislation relating to marijuana decriminalization. Crockett said she was also concerned with removing pot from the list of controlled substances and would work on criminal justice reform.

Rep. Celia Israel, D-Austin, a founding member of the LGBT Legislative Caucus, filed a bill to stop reparative therapy — commonly called anti-gay conversion therapy — from being used on minors. Last session, the bill had a hearing. Israel hopes to move it to the floor this session.
Mary Gonzalez filed her “Romeo and Juliet bill” that would equalize penalties for sex with a minor, which are currently more severe for a same-sex couple than an opposite-sex couple.

Both Phelan and Abbott were optimistic about having a successful session and cited last session’s accomplishments especially in funding Texas public schools. Little got done in the 2017 session, which was mired down debating bathroom bills. That ended when Rep. Julie Johnson, D-Dallas, a founding member of the LGBT Legislative Caucus, defeated Rep. Matt Rinaldi, the author and a major proponent of the bathroom bill.
Johnson said she was optimistic about this being a successful session, which got off to a good bipartisan start.