A viral star is reborn 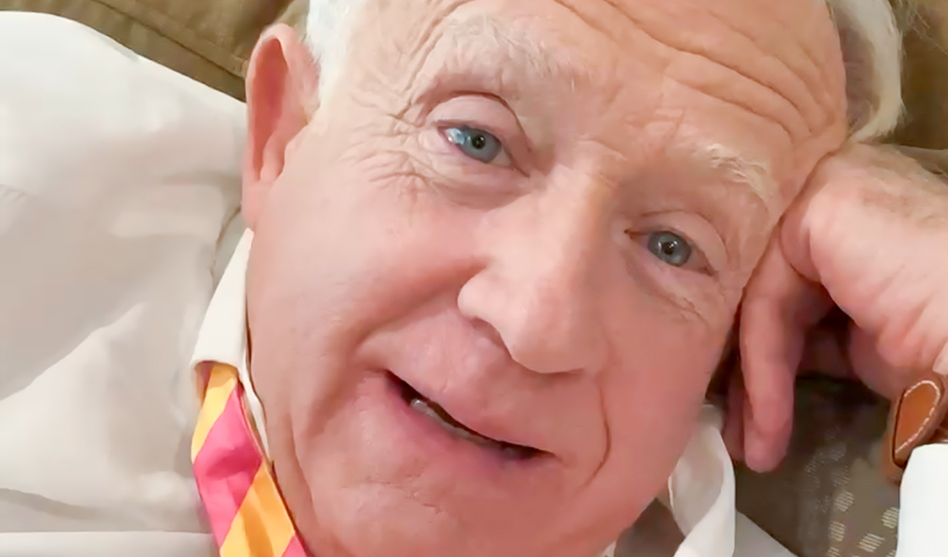 Thanks to Leslie Jordan’s quarantine videos, the world now knows him for exactly who he is

“Where should I be looking? There? Or there?” His face smothering the camera as he wonders where his eyes should be, Leslie Jordan is settling into our video interview like it could be a comic routine about somebody trying to use Zoom for the first time. Puckered together in a kind of duck-face pout are his elastic lips. A delicate smile curls into formation.

Then Jordan scoots so low that only his forehead is visible. More duck face. A big, eyes-squished grin. A peculiar sound that may or may not be a fart. And finally a tickled laugh when I tell him I recognize that he’s in the same room that made him a viral sensation. 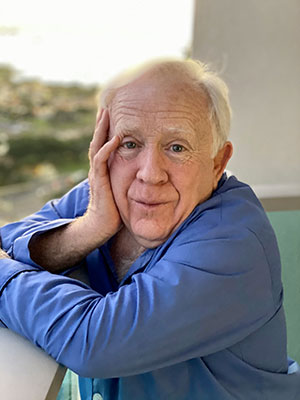 “It’s the only room I’ve got!” he chuckles, noting that he’s on video from his bedroom in West Hollywood. “I’ve got everything set up. And there’s my bed!”
Sure enough, that IS his bed. Throughout the pandemic as he’s documented his quarantine experiences, that same bed has been seen all over his Instagram feed. There, as a COVID respite, Jordan has delivered lighthearted frivolity and cheeky humor to those he calls his “fellow hunker-downers,” in, of course, his signature southern drawl. In one clip, he listens to a Katy Perry song that is “so lit,” while another finds him curious about Lizzo’s definition of “her juice.”

Internet virality might be new for Jordan, but, at least in the LGBTQ+ community, he’s always been a star. Jordan’s three-decade career has, most iconically, seen the 65-year-old actor in the Emmy-winning role of Beverley Leslie, a rival of Megan Mullally’s Karen Walker, in Will & Grace. But his career in TV and film goes back to the 1980s. More recently, Jordan starred in several seasons of Ryan Murphy’s American Horror Story, and this year he stars alongside Mayim Bialik and fellow out actor Cheyenne Jackson in the Fox sitcom Call Me Kat.

When a friend told him he had gone viral while Jordan was quarantining with his mom in Tennessee in mid-March of last year, Jordan replied no, he was fine; he didn’t have coronavirus. But his friend was referring to Jordan’s Instagram, where he has gone from just thousands of followers to, currently, around 5.6 million.

Dallas Voice: Congratulations, first of all, on surviving AND thriving in a pandemic. Leslie Jordan: Give me a good pandemic, I just flourish! Ha! I don’t know why that is or how that happened, but I think people were looking for just some laughter. I started that Instagram; I was in Tennessee with my mom, and I didn’t have a lot to do. So I just started being funny. I had three rules that I realized I had and didn’t know I had: nothing about religion, nothing about politics and no products. I’m kind of wanting to rethink that “no products” part. Ha!

I had a conversation with my housemate recently about being aging gays and how I look to you as inspiration because you are 65 and in your prime, I would say. And so people telling me that, for gay people who get older, there’s nothing left for us after a certain age, you have completely turned that upside down. Oh, that’s so kind to say. Because I remember my 50s were tough. As you get older, you walk down the street, and people don’t even look at you. It’s weird the way we treat people that are older, and especially in West Hollywood, where everybody wants to be young and beautiful.

I think we’re past that as a gay community. I hope. You know, I think that also had a lot to do with the bar scene, which has been curtailed. But even before that, back in my day — I got here [to California] in ’82 — all you had were the bars; you’d go to the bars. That’s just where you went to see other gay people and meet other gay people. Now I think, “My gosh, we have everything. We have choirs. And we have gay camping. We have gay this, we have gay that.” There’s a lot of ways, plus the internet, where you can meet people. 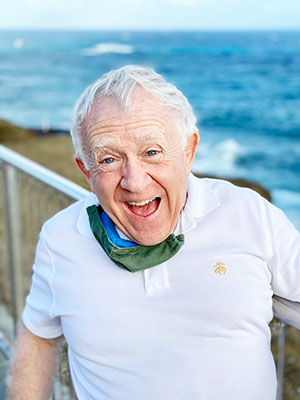 Does it feel like right now is kind of a new beginning for you? Or just THE beginning in a lot of ways? As you said, I’m 65. I have achieved everything I came to Hollywood to achieve. I’ve done Broadway; I’ve done film; I’ve done a lot of television. And I have this series now on the air (Call Me Kat), and it looks like it’s pulling some numbers. It may stay around for a little while, which is a wonderful thing to know as an actor. I have a job!

People think that you’re rich, you’ve said. And I’m not. Listen, she works hard for the money! I think what it feels like is that I have achieved everything. And also, I’m more comfortable with myself. I’m perfectly comfortable. I got sober 22 years ago. I had a little drinking problem, and I might’ve done a tiny bit of crystal meth. I got clean and sober and realized that I was just riddled with internal homophobia.

[I was] 42 years old, and here I was, the life of the party, this and that. But all of a sudden, I’m faced with that. And my journey into my sobriety, which has been the last 22 years, has also been a real good journey into my queerdom. It was a lot of therapy. You go to your meetings, and then I had to go to a recovery program because I had too many meetings. I was going to so many meetings, I thought, “I’m addicted to meetings!” Ha! No, I’m teasing.

I sit here [now] so comfortable with myself, with who I am and what I am. And that’s a wonderful place to be. So everything from here on out is just gravy. It really is just living life one day at a time and having a really good time.

And you can say that now because you have finally met Dolly Parton. That’s it. Now all I ask myself is, “What would Dolly do?” She’s a sterling human being. Oh my gosh.
What was the first thing that you said to Dolly when you met her last year? I was in Nashville recording. I have a gospel album coming out [Company’s Coming, featuring Jordan singing duets with several featured guests, including Brandi Carlile, Tanya Tucker, TJ Osborne, Travis Howard, Katie Pruett and surprise guests still to be announced]. But anyway, we were recording and she was at a studio near us and she said, “Drop by.” I just felt like I’d known her forever.

What can you say about the song that you have in the works? It’s an old, old, old hymn. It’s one that she said to me, “I sang that in church growing up; I sang that hymn over and over and over again.” When I hear her singing this song with me, I’ll wet my pants.

How did the gospel album come about? My friend Travis Howard and his producing partner in Nashville, Danny Myrick, we would record Sunday hymns and just put them on the internet, just the two of us, and it was so popular on Instagram and people said, “You should do an album.” I thought, “Well, I’m not a singer, really. I’ve got the kind of voice that’s good for a hymn, but I’m not a singer.” The response was just unbelievable [from] people who said, “I’ll be on that album with you.”

You also have a book called How Y’all Doing? coming out in April. What are we going to learn about you from the book that we don’t already know? I don’t know that you’ll really learn anything because I want to make sure that it wasn’t — you know, in My Trip Down the Pink Carpet, I covered everything. [For this], what I decided to do was to take all my best dinner party stories. So I’ve got 12 stories that are just fun, just things that have happened to me, lessons that I have learned. A little bit but not much about me, just life in general.

My favorite of all of them is when I got to throw the first pitch out for the Washington Nationals, having never thrown a baseball in my life. And it’s the craziest story, and it involved Pulse nightclub. Because it was part of my one-man show, I got to tell it to Mrs. Obama. She was in the audience. Michelle Obama came to see me! I got to tell that story. It’s in the book. It ends the book.

Will any tea be spilled? Well, I don’t think so. Certainly not about anybody else. I made sure. I don’t like that, when people talk ugly about other people. That’s my New Year’s resolution: to be really, really sweet and nice and not ever talk ugly. I’m gonna try to stop cussing. I don’t know how I’m gonna do that. Ha! I cuss — not a lot, but I just don’t want to cuss at all. 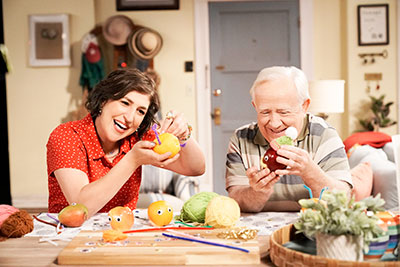 For this new generation of fans you have who’ve discovered you on Instagram, what is something about your career you would like them to know? My first job ever was [the 1980s TV series] The Fall Guy with Lee Majors and I played a killer. I did six episodes. Murphy Brown came around about that time. What interests me [about] my Instagram, which has just jumped to about 5.6 million, is how many people discovered me there that didn’t know me. I think: “I’ve been around forever! Foreveeeer I’ve been doing this!”

But I like the fact that I mistakenly thought that people would know me from my roles. So they would think, “Oh, Beverley Leslie on Will & Grace and, you know, [my line] ‘Well, well, well. Karen Walker.’” But my new fans know me as me. I think that’s kind of nice that people are responding to ME, not some character that I play.

What do you want to be remembered for? I want to be remembered like a Dolly Parton — [somebody] that nobody had a bad word [about]. “He was a nice guy.” And the fact that I’m fairly talented in this and that, that’s OK. But I just want people to know he was good. He was a nice guy. He was a good guy. I think that’s most important. And that I was raised right. I want to say to these kids now: “Who raised you? Who raised you!”

Was your Southern accent and what you’ve called your “gay voice” always embraced like it is now? I got to Hollywood and there was a casting director that told me, “You’re such a character actor already, and if you could lose your Southern accent… .” And I tried, and I couldn’t. The day that I decided, “Well, this is just a marketable package here” was the day that I started working. But I worried more, I think, because of my internal homophobia, about my gay accent. I would listen to myself and think, “Oh, girl, you’ve gotta calm down a little bit.”

I don’t think that I ever lost a job [because of it]. I was on Star Trek, and they hired a linguist to teach me how to say the words, and she got so exasperated she said, “Mr. Jordan, ‘feather’ doesn’t have four syllables!” I don’t think I’ll ever be like Robert De Niro or Meryl Streep. I’ll never just disappear into a role. I just do what I do and various forms of it, and it’s worked thus far, and kept me afloat.