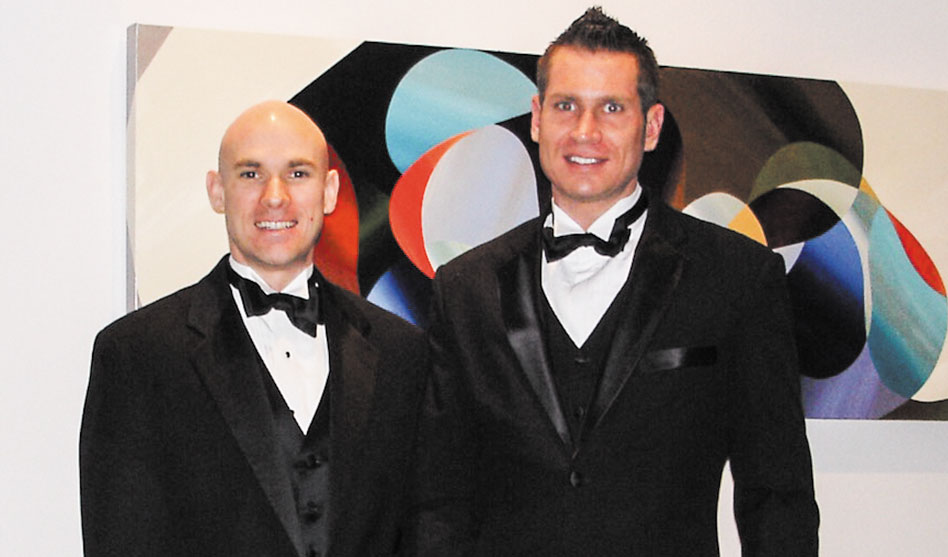 Don Zarda, left, pictured here with his partner Bill Moore of Dallas, died in a skydiving accident in October 2014. But Moore and Zarda’s sister continued his lawsuit against the skydiving company that fired him because he was gay. (Photo courtesy of Bill Moore)

What a year. We have seen pandemics before; we have seen social upheaval, and we have seen contentious elections. But all at once? Not in recent memory.

Bostock v. Clayton County
With two conservative justices appointed by Trump — Justice Neal Gorsuch and Justice Brett Kavanaugh — already sitting on the U.S. Supreme Court, activists in the LGBTQ community were leery of how the court would rule in Bostock v. Clayton County, a case that consolidated three cases (Altitude Express, Inc. v. Zarda and R.G.&G.R. Harris Funeral Homes v. EEOC & Aimee Stephens) all dealing with employment discrimination against LGBTQ people.
But in a surprising and strongly-worded ruling issued June 15, the court declared that Title VII of the federal Civil Rights Act does, indeed, prohibit discrimination in employment against LGBTQ people, handing the community a victory we have spent decades fighting for — one that many consider even more important than the court’s 2015 Obergefell ruling on marriage equality.

The ruling has been one of the few bright spots for the LGBTQ community in a year of strife.

The court’s ruling declared that the word “sex” in Title VII of the Civil Rights Act does specifically include sexual orientation and gender identity. But questions remained over whether that interpretation would hold true in other federal statutes, especially the Affordable Care Act, where the Trump administration has worked to delete protections for LGBTQ via rule interpretations allowing health care workers to discriminate based on religious beliefs.

The ruling held special meaning for North Texans who had known Don Zarda, especially his partner, Bill Moore, owner of Advanced Skin Fitness in Oak Lawn. Zarda was a skydiving instructor for Altitutde Express in Long Island, N.Y., in 2010, when he was fired because he was gay. Zarda filed suit against Altitude Express but was killed in a 2014 2014 base-jumping accident and never got to see his lawsuit help make history.

In the other two cases, Gerald Bostock sued in 2013 when he was fired from his job with Clayton County after joining a gay softball league; trans woman Aimee Stephens sued in 2014 after Harris Funeral Homes fired her when she told them she was transitioning. Stephens died of long-term health issues in May this year before the Supreme Court issued its ruling