2020: Local stories that had us talking • Construction on The Strip 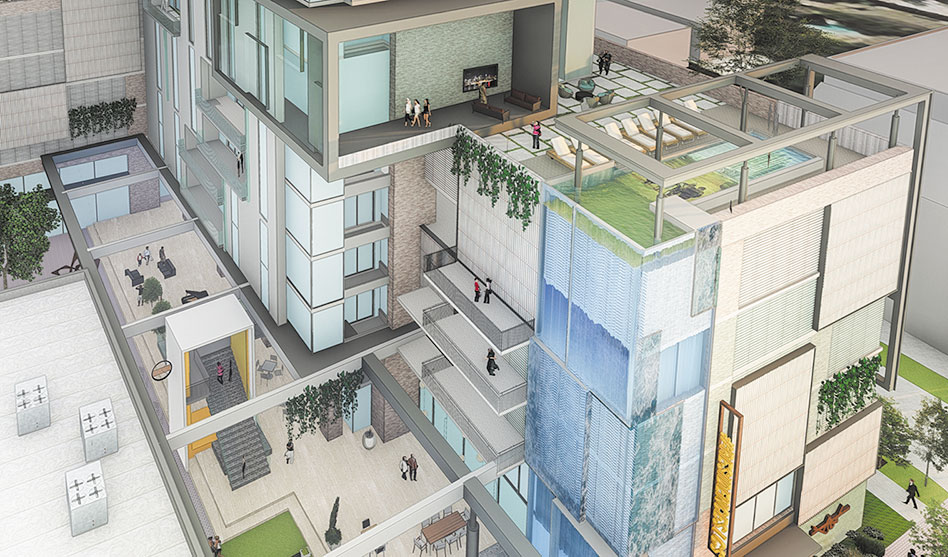 An artist’s rendering of the development planned behind S4.

Construction on The Strip
As 2020 was winding down, Caven Enterprises entered into an agreement with developer PegasusAblon in November to develop two residential-mixed use buildings on land now owned by the the company that operates several bars on Cedar Springs Road.

Caven, which owns TMC–The Mining Company, Sue Ellen’s, JR.’s Bar & Grill and Station 4, will sell its properties to PegasusAblon but continue to own and operate its bars. The sale involves property on the west side of Cedar Springs Road, from Reagan to Throckmorton Street, and at 4001 Cedar Springs Road. The existing buildings along Cedar Springs Road will remain as they are, and the new residential buildings and parking structures will be built on what is now surface parking lots. Development will be done in two phases, with the building behind S4 going up first. Among the features is a covered community park behind S4 that will feature a 70-foot waterfall.

PegasusAblon’s principal is Mike Ablon, who ran for mayor in 2019 and is best known for developing property in the Design District, changing the area from industrial to residential, restaurants and retail. Caven CEO Gregg Kilhoffer said over the years many developers have come to him with offers, and each involved buying out the property and tearing down the buildings along Cedar Springs. He said Ablon’s offer was entirely different because, as a condition of the sale to PegasusAblon, the bars must remain to become an integral part of the new development.

a meeting held at TMC–The Mining Company, Caven representative Ed Oakley explained the project to interested community members. Among the biggest concerns was parking. He explained that the 200-car lot behind 4001 Cedar Springs would remain open during construction behind S4. Not until after the parking structure opens in the building behind S4 would construction begin on the 200-car lot.

Another issue was affordability, and Oakley said there would be an affordable housing component in the project.
The project must first go before the Oak Lawn Committee, which can recommend changes. Because the area is on the glide path to Love Field, zoning includes height restrictions. Recently, nearby projects within a block have been given variances to construct taller buildings than have ever been built on that side of Oak Lawn Avenue.

After approval by the Oak Lawn Committee, the project must be approved by city zoning and the Dallas City Council. Once approved, the property will be sold by Caven to PegasusAblon. Proceeds will be distributed to Caven employees who are owner-operators of Caven Enterprises. Oakley said he would schedule future meetings to keep the neighborhood informed on progress.