‘You have to stay positive’ 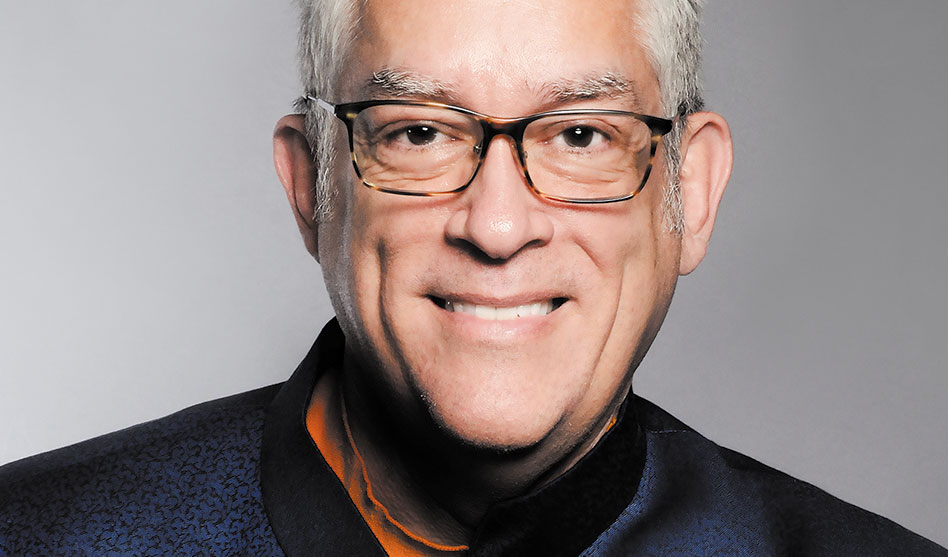 EDITOR’S NOTE: Each year in December, Dallas Voice recognizes a member of our community as the LGBTQ Texan of the Year to honor that individual’s outstanding contributions during the last year to not only the LGBTQ but to the North Texas community as a whole. This year, to honor his efforts in not only this year but in 2020 as well to maintain a viable arts community in North Texas despite the ravages of the COVID-19 pandemic, we name Charles Santos as 2021 LGBTQ Texan of the Year.

For 20 seasons, Charles Santos has led TITAS/Dance Unbound (T/DU) as its executive director. As a presenting organization, TITAS has introduced Dallas to a number of national and international dance companies. That would have been the same for TITAS’ 2019 season.

“The impact for us started that year,” Santos said. “We were getting close to one of our dates with [the Beijing Dance Theatre. Then] those borders were closed, and all the Asian dance companies shut down before anything else.”

Like many — if not all — arts organizations, TITAS had to pivot and think fast on its feet as the ripples from the COVID-19 pandemic turned into a tidal wave: “We don’t present local companies because they present themselves in the same venues,” Santos said. “But we had to make some choices for our season.”

He described the pandemic as a time for problem solvers, and as he and TITAS moved forward, Santos worked to be a part of the solution.

It was this leadership and involvement that led him to be named LGBTQ Texan of the Year.

“Charles Santos is the epitome of the LGBTQ Texan of the Year. He never backs away from a challenge; he faces issues head on and serves as a strong voice and advocate for the arts. He shows up, rolls up his sleeves and does the work,” Arts District Dallas Executive Director Lily Weiss said.” He is engaged in the community serving as an advocate and a voice for others. Charles Santos is a visionary and collaborative arts leader who serves as a mentor and role model for those who work with him. 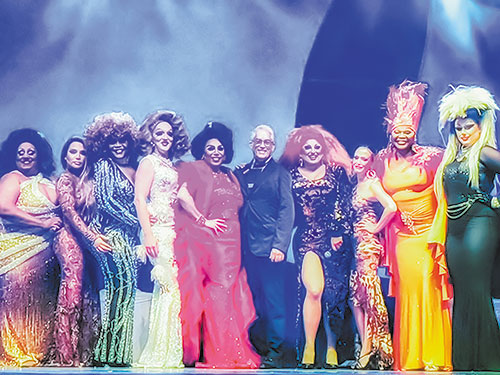 Charles Santos with the cast of The Rose Room in Strauss Square in October 2020. Photo courtesy of Jamie Bolton

“For the past 18 months, he has gathered leaders of mid-size dance and music organizations to share resources about PPP funding, CARES Act funding, Shuttered Venue Operators Grants, best practices, strong communication strategies, and served as a resource for other leaders.”

Among his Arts District peers, the organization leaders began to share information on a Friday phone call that began in April 2020. There the city and organizations like the Dallas Symphony and Dallas Theater Center and others in Arts District Dallas discussed pandemic resources and all else related to COVID and its impact on the arts

“As a group, we shared what we knew every week,” Santos recalled. “This was an enormously useful tool for us.”

That call continues to happen today, he said, just twice a month now instead of weekly.

What that call led to was an informal extension that Santos offered to all other arts groups. He called it the DFW Arts and Music Roundtable, and, through Zoom, he helped with getting information out so that everyone in the arts community could be on the same page.

“We invited groups no matter their size, and we shared everything we got from the earlier meeting with the city and larger groups. This is all about communication,” Santos said.

That also gave all those organizations opportunities to share information and benefit from knowledge they might not have gotten otherwise. Communication, Santos stressed, was — and remains — key.

“We all stopped looking at our own piece of the pie,” he said. “I think a great thing in all this difficulty that bubbled to the surface was this collaboration and community.”

Santos will immediately say that these were all team efforts. And that’s a fair assessment. But Santos’ passion for helping local arts handle and rebound from the pandemic felt evident as he strived to get much-needed information out to his contemporaries.

The Arts Community Alliance (TACA), which works to provide grants to area arts groups, acknowledged Santos’ contributions during the pandemic. “His leadership of TITAS/Dance Unbound has never wavered and has been a light for us all, even throughout the dark days of the pandemic,” Donna Wilhelm Family President and TACA Executive Director Terry Loftis mentioned. “Charles Santos has been a stalwart champion of the arts in Dallas for as long as I can remember.”

Over Santos’ 20-year tenure, he recalled two “local” companies within a T/DU season: Fort Worth’s Texas Ballet Theater and Ballet Austin: “Anything in Texas, we consider local,” he said.

TITAS (an acronym for Texas International Theatrical Arts Society), however, has been very curatorial since its inception in 1982 by co-founders Gene Leggett and Tom Adams. The intent behind TITAS — as stated on its website — is “to provide North Texas communities with the opportunity to experience the best of American and international music, dance and performance art through a variety of presentations and educational outreach activities.”

With as big a scene as Dallas has, local companies can develop their own seasons and shows. In a business sense, Santos explained that working locally would be a balancing act.

“We have great companies in Texas, but it is a challenge for us to present, because it’s about weighing the finances and the curation to what we want the season to look like,” he said. “Thus, it would be really hard to break even.”

But, as Santos mentioned, this is a time for problem solvers. When the Beijing Dance Theater couldn’t come in for their date in February 2020, Santos and his T/DU team pivoted to the local scene to create something.

“One of the things that makes Charles so unique and inspiring is that he always thinks beyond himself; he is consistently focused on how he can support, promote and elevate the broader arts community,” said Debbie Storey, president and CEO of AT&T Performing Arts Center.

That spirit came through when Santos and TITAS turned their eye inward to Dallas.

“He created a two-day program with local companies,” Bruce Wood Dance Executive Director Gayle Halperin said. “It was a perfect opportunity because the dates were booked and tickets sold.”

The newly-created Festival of Dance would be a preview to a later production Festival TITAS. The bill included BWD, B. Moore Dance, Dallas Black Dance Theatre and Texas Ballet Theater. Not only did Santos work to create a new show in lieu of the postponed BDT performance, he also gave work to locals.

“It was such an incredible opportunity for DFW dance companies who haven’t been on a TITAS bill,” Halperin added. “That was really meaningful at the time, as well as empowering.”

When T/DU was to present Pilobolus this past summer, a reconfigured and COVID-safe outdoor performance was created in collaboration with the Nasher and students from Booker T. Washington High School for the Performing and Visual Arts.

“The Nasher director and I reconceived the show with Booker T. dancers and hired a local actress for a recording and had Pilobolus in the garden,” Santos recalled. “It was so fabulous and a magical performance. ”

T/DU also reached out to the Rose Room.

“Charles Santos was a godsend to the Rose Room cast during the pandemic,” said Rose Room Show Director Cassie Nova (aka James Love). “He hired us on two separate occasions when no one else was having shows. He kept us all safe by following all of the COVID protocols, and we had two incredible shows at his beautiful venues.”

When the ATTPAC opened up its outdoor space in Strauss Square, T/DU created a show with Nova for a night of drag.

“They were absolutely happy to follow all the protocols,” Santos said. “In a group of divas, there were no diva attitudes. They were fantastic, and we sold out.”

That show didn’t just offer a sense of relief for the queens who hadn’t performed under lockdown; it was also a validation of their art.

“Charles Santos developed the series TITAS/Unfiltered presenting Stars of the Rose Room to shine a spotlight on underserved local artists who were also affected by the pandemic,” Weiss said.

“They are working artists. I think people forget that,” Santos said. “We had a blast with this, and it turned out to be a great way for us to support local artists.”

That first show was such a hit that TITAS did a second one. Last December, they moved into the Winspear Opera House, where area drag queens took over the stage that usually hosts opera, dance and theater.

“I don’t know if he will ever know how much we needed that and how much it meant to us showgirls,” Nova said. “Not just financially, but mentally it truly helped us. Performing in front of an actual audience again at that time was like that first breath after being underwater. It was the renewal we all needed.”

Santos revealed that TITAS has another drag show on the horizon with details to come.

The ultimate takeaway from all these collaborations was that these artists were all paid by T/DU.
“The drag queens, the festival companies, the students — they all got paid,” Santos said. “We have to stop treating artists like their work is a free art form. That benefits them but also us.”

While the pandemic pressures have lessened (knock on wood), Santos can direct his attention to T/DU’s current season, underway now at Winspear Opera House.

But the pandemic hasn’t gone away. As of press time, news had just broken that the new omicron variant of the virus has made its way to the United States. For Santos, though, his leadership prods him to only move forward.

“I have a really good team, and they all jump in, and we communicate. I have a great board who is super supportive of the stuff we do. This is a big team effort,” he said. “We’re still in this, but like I said, the great thing is the community and collaboration that has come from this, and I hope that continues.

“I’m a big believer in working toward solutions, and you have to stay positive through it all.”