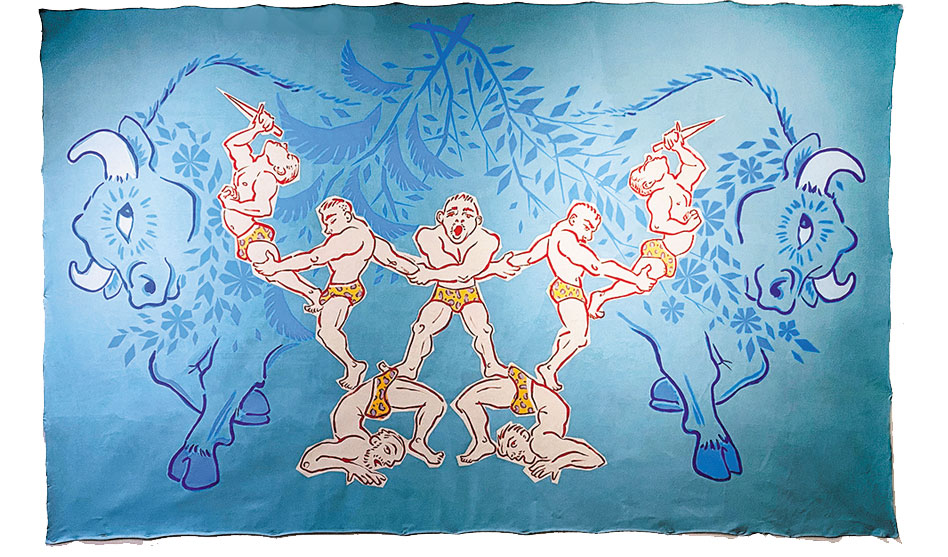 Heyd Fontenot’s Color! Pattern! Propaganda! is on display at Conduit Gallery through Jan. 1

All you really need to know about Heyd Fontenot is that he is a brilliant artist who is not afraid to upset people. His work is witty and honest. It is inviting and impossible to look away from.

It is also bewilderingly beautiful. It can be combative the way the truth sometimes must be.

Fontenot is a multidisciplinary artist and curator. He’s worked in advertising, theater, television, film and digital media. He’s directed programs and won awards and shown internationally. Some of his best-known works are figurative paintings and drawings, for which he recruited friends and artistic peers as models. 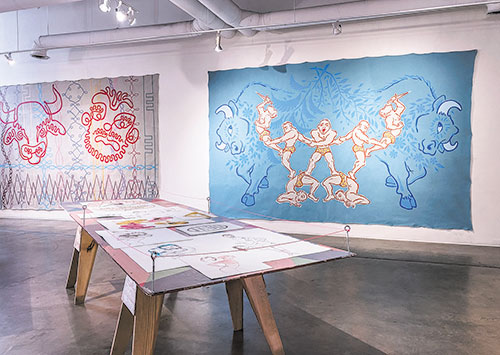 But all you really need to know is that Fontenot is an artist to watch.

His vision is unflinching. Sadly, those who need to see it most — those suffering from the conservative delusion — will be too afraid to swallow the pill. Nonetheless, there is a joy in reveling in truth enrobed in such delicious beauty.

Fontenot recently opened an exhibit titles Color! Pattern! Propaganda! at Conduit Gallery in Dallas. He created all of the pieces in the show over the last five years, “So, it’s a bit of a personal journal and a travelogue from moving and working in British Columbia, San Antonio, Tulsa and back to San Antonio, and also working through the pandemic the last two years,” Fontenot said.

Living through the Trump presidency was such a heartbreaking period for people, particularly the empaths among us. This show is acutely aware of that. The textual pieces that emulate political protest signs, Fontenot said, “were simply made to feel connected to my expressive impulses as a response to all of the fuckery.”

When he was creating this work, Fontenot said, he did not immediately have a sense of how exactly he would present it. “I was just making it as a way to feel better, to get the dopamine high” when he was in between feeling helpless and hopeless.

Like so many of us, he’s felt overwhelmed by the blatant resurgence in American fascism and bigotry. So, despite the fact that he says that he wasn’t even sure if this particular work qualified as capital-A “Art,” “It was just something I felt compelled to manufacture, like a final plea for reason or compassion.” 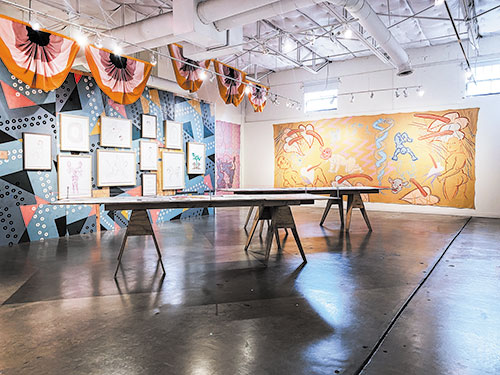 The title for the exhibition Color! Pattern! Propaganda!, was an acknowledgment that some audiences would prefer to be entertained rather than engaged. “Content somehow is ‘radical.’ So, by engaging in this argument, having something to say, is risky and would turn off some people, “yet, it feels incredibly urgent to speak up right now.”

Fontenot noted how this is particularly true given how absurd and normalized “alternative facts” are. “Hyper-aggression is being condoned by our systems, but artists are threatened with censorship or funding being pulled,” he said.

Fontenot added that he hopes this work might help people feel less alone and will reflect something back to the visitor. He hopes it will say something that’s been bouncing around in their unconscious.

“I hope it has resonance,” he explained. “Like a comedian playing to a live audience, I don’t just want to tell jokes, I want the jokes to hit a beautiful note in the heart of the listener that thrills them.”

Fontenot said although he feels lucky to have already received such positive responses to this show, especially when those responses come from artists he respects and admires like Nancy Newberry or Celia Eberle, sometimes the negative responses are equally enjoyable because they are so truly entertaining.

A friend of Fontenot’s told him that when they were visiting a show he had earlier this year at the Galveston Art Center, a family entered the gallery and was being obstinate about the mask policy.

The gallery attendant finally got them to all wear masks and as soon as they stepped into the exhibition, they immediately said “No. This is against our religion,” and left.

Fontenot is incredibly curious about how that family interpreted or misinterpreted what they saw or what they think they saw. “But it also makes complete sense to me that people who don’t want to observe safety protocol in a global pandemic also can’t stomach my created narrative and imagery,” he said.

Fontenot likes to subvert the expectation of a specific space, so he uses installations to overstimulate and confuse viewers when he can. Religious references are common in his work. In fact, he calls himself a “prolapsed Catholic” because he feels so damaged by his religious upbringing. “But even within that, I draw upon the aesthetics of Catholicism — the drama, the ritual, the grandness of creating a transformative space,” he said.

He’s drawn to themes from his childhood, including rodeos and livestock shows which encompass the pageantry and aesthetic of rural/western America. “I often incorporate taxidermy or prize ribbons that seem to come from a county fair rather than the art world,” he said.

His use of the minotaur draws from Greek mythology, of course. But he also uses them as a reference to Pablo Picasso as a problematic figure — “the embodiment of toxic masculinity, abuse of power, entitlement and aggression.”

When it comes to his figurative drawings and paintings, Fontenot does not use “nudes” as his primary descriptor because he wants viewers to see them as the complex artworks that they are.

“The dynamism isn’t from objectification or sexual provocation but from what is communicated emotionally,” he said. “It’s really important for me as an artist that viewers understand the humanity of my models/subjects.”

Fontenot sees his large works as panels in a thesis of sorts, a continuous story made up of vignettes that delve into gender and power and ego and archetypes and the human psyche. “I’m talking about awkwardness and ugliness on the path to being loved,” he explained. “Even criminals have qualities that make them sympathetic. No one is completely wicked, and no one is infallible. We should be most afraid of those who would have us believe they are infallible.”

As to whether he sees the act of making art as an act of rebellion or a political act or an act of survival, Fontenot said simply, “All of the above.” For him, making art is primal instinct above all else: “I’ve always done it, and I can’t imagine stopping.”

The subjects he’s been most compelled to discuss are typically off-limits which he says ties into his queer identity and giving voice to the unmentionable. “Somehow my very existence has been inconvenient for others — fighting for validation, struggling for visibility and acknowledgment, but not just for myself, but all of the overlooked and undervalued. So, yes, it is about survival,” Fontenot said.

“My work as an artist is so intricately woven into my identity as a person. Like losing one of my senses, it’s hard to imagine existing without it.”