When the stars align 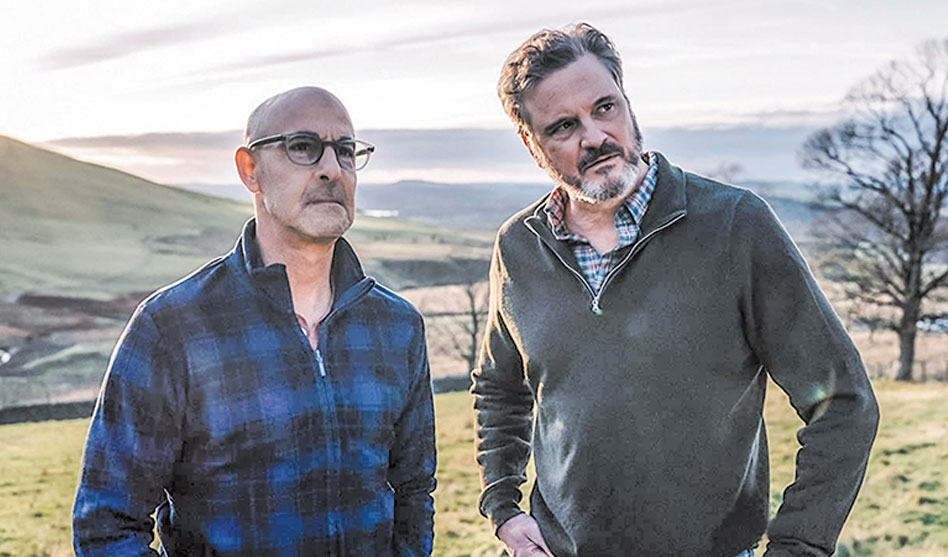 There are some people (this writer included) for whom Colin Firth’s Academy Award-worthy performance was in 2010’s A Single Man (Firth’s initial gay role), his first such nomination, even though he won the trophy the following year for The King’s Speech. That said, 10 years later, straight Firth is playing gay again, in Harry Macqueen’s Supernova (Bleecker Street), and this time he could potentially snag his second Oscar.
Pianist Sam (Firth) and author Tusker (Stanley Tucci) are a married gay couple who have been together for many years. Their communication consists of playful banter, sweet bickering and loving admiration.

The pair, who live in Sam’s native England, are on a road trip in their caravan with their dog Ruby. Among the plans they have for this journey are revisiting a campsite from years earlier, as well as a stopover at the home of Sam’s sister Lilly (Pippa Haywood), her husband Clive (Peter MacQueen) and daughter Charlotte (Nina Marlin). A recital, marking Sam’s return to concert performance, is also on the schedule.

This voyage, however, has more significance than others. Tusker, who has been diagnosed with early onset dementia, is in rapid decline. For all intents and purposes, this odyssey is a chance for Tusker to say goodbye to people who have meant something to him.

Of course, the hardest farewell will be the one with Sam. Sam, who put his entire performance career on hold to care for Tusker, is in denial.
But there’s no refuting Tusker’s condition. Especially when, early in the movie, after a pitstop where Sam leaves him asleep in the caravan and returns to find Tusker and Ruby gone. In a panic, Sam drives down the road for a stretch, only to find Tusker off to the side, standing stock still in a state of confusion.

In terms of acceptance of his condition, Tusker’s approach differs from Sam’s. For example, he didn’t bring his medication with him — not because he forgot it, but because he doesn’t think it helps him, and it would only serve as a reminder of his illness.

Sam and Tusker keep an audio journal on microcassettes as another way to monitor his waning ability to recall, as well as create an audio scrapbook of memories. It’s one of the things that continues to link them, in the same way that looking at constellations through Tusker’s high-power telescope does.

The scenes with Sam’s family bring a lightness to the story. There is a surprise party, and the occasion, which provides some much-needed humor, feels genuine and celebratory. But the bliss is short-lived when Sam makes a series of discoveries pertaining to Tusker’s latest writing project, as well as his plans for the near future.

Road trip movies, including the gay-themed Uncle Frank, as well as Nomadland, made before we were all sheltering in place, have become increasingly popular. If we can’t travel, at least we have the pleasure of watching others do it. In that way, Supernova fits right into the current zeitgeist. In addition to that element of escapism, Supernova also brings dramatic realism to same-gender love and relationships, along with all the heartache that it potentially generates. Rating: A-