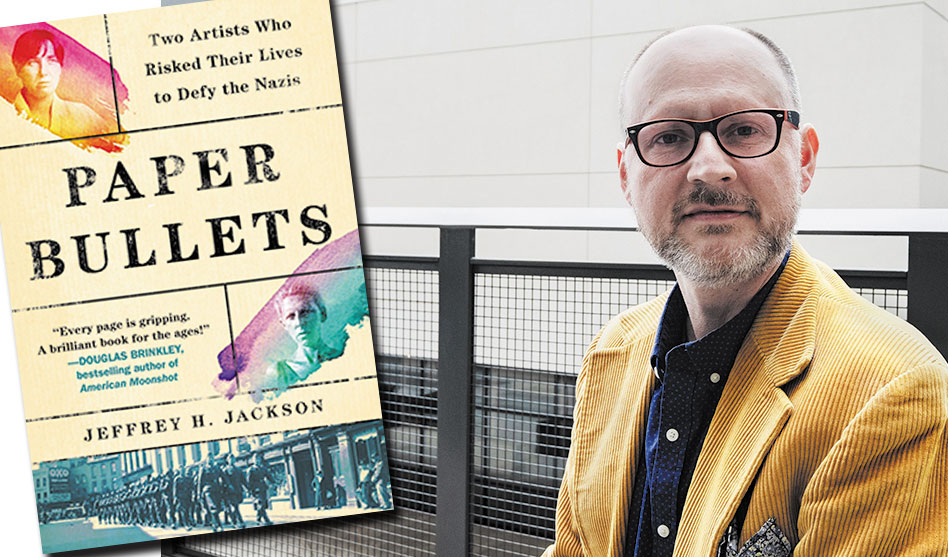 If you’re patient, that’s how you break big things into very little things. One pebble taken from here, another small stone removed from there — and over time, you undermine the structure. It’s the same for dams, walls, foundations, people and, in the new book Paper Bullets by Jeffrey H. Jackson, it’s the same for wartime operations.

Twenty-six-year-old Lucy Schwob and her lover, 28-year-old Suzanne Malherbe, had never lived apart from their families in Nantes, France. But one day in 1920, they were on their way to their new lives together in Paris. It hadn’t been long since the end of World War I, and life seemed exciting and fresh.

They’d known one another since they were children, both hailing from well-to-do households that supported this new endeavor.

By 1935, however, politics were inescapable, and Lucy started thinking about a quieter life, partly because Paris was becoming intolerant of people like her and Suzanne. For her part, Suzanne wasn’t interested in leaving the city. But by 1937, she gave in, and they moved to an estate on Jersey, an island in the English Channel.

Not long after their arrival, World War II broke out, and Jersey was all but abandoned by the British. Telephones lines were cut, soldiers were withdrawn, and the Nazis soon noticed. By 1940, German soldiers arrived, and Lucy wasn’t taking that lying down. She convinced Suzanne to join her in quiet resistance, and they spent many long hours crafting demoralizing messages, furtively leaving them where German soldiers were sure to find them — in uniform pockets, on car seats, on doorsteps, inside books and magazines.

And then one night during dinner, someone pounded on the door.

“It was,” says Jackson, “the moment Lucy and Suzanne had been expecting every day for nearly four years.”
As history books go, Paper Bullets is unique. A small part of this book is biography, though author Jeffrey H. Jackson seems a bit sedate about his subjects. His portrayal of Lucy Schwob is rather stonily detached, as if all we need are the barest facts, and they’re not particularly complimentary. Suzanne Malherbe is treated better but still somewhat impassively. Neither subject seems fleshed-out enough.

Happily, the other, more prominent part of this book is more comfortable and exciting to read. That’s where the heart of the tale lies, in which these two astoundingly courageous women fool the Nazis through literally homegrown resistance, and then, once the jig is up, further befuddle Hitler’s men with the ultimate heel-digging. The last third of the book almost reads like a months-long Hogan’s Heroes episode, only this is no sitcom.
In the end, if you’re in search of something biographical, it’s here — sort of. If history is what you want, though, and biography is incidental, then Paper Bullets is a good pick.