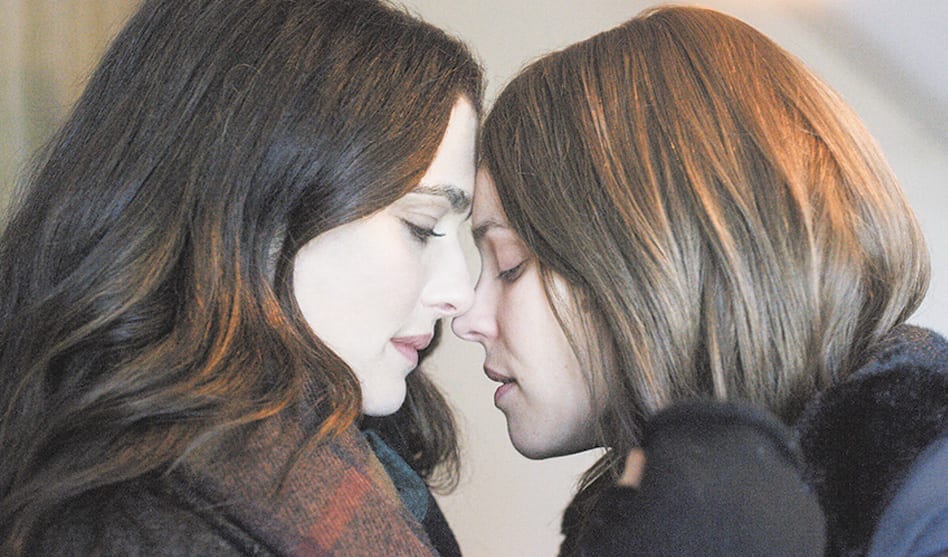 R achel Weisz has strong feelings on makers of queer films discussing their work with queer media. Not to do so, she says, would be “ridiculous and wrong and unthinkable.” The topic is broached in light of her new Sapphic film, Disobedience, which arrives just months after Call Me By Your Name, which received little LGBTQ-specific promotion from its director, writer and lead actors, Armie Hammer and Timothée Chalamet.

As producer and star of Disobedience, the Oscar-winning Weisz was instrumental in the lesbian drama’s inception and creation, which began when the 48-year-old British actress’ quest to tell more female-centric stories led her to an array of feminist books, including Naomi Alderman’s 2006 novel. She optioned the book’s film rights, then found her director: Sebastián Lelio, the Chilean filmmaker with plenty of arthouse cred, including 2013’s Gloria and this year’s Oscar winner for Best Foreign Language Film, the trans drama A Fantastic Woman.

In Disobedience, Weisz portrays Ronit, a lapsed Jew now living as a photographer in New York City who returns to her Orthodox enclave in London for the funeral of her rabbi-father. There, her childhood friend and lover Esti (Rachel McAdams), now married to the rabbi’s protégé Dovid (Alessandro Nivola), is emboldened by her passion for Ronit to pursue her own path to self-discovery and, ultimately, religious freedom.

Weisz has feminist ambitions: She’ll play a queer woman in the upcoming historical drama The Favourite, before portraying British military surgeon Dr. James Barry, born Margaret Ann Bulkley, a 19th-century woman who disguised herself as a man to become a doctor.

Dallas Voice: Can you just produce queer  stories for the rest of your career?

Rachel Weisz: Yes, please. Do you have any books to point me toward?

You know what, you’re up on lesbian lit more than I am. I hear you got deep into it.

I read a few books.

Call  Me By Your Name did almost no LGBTQ press promo and made very little money despite critical acclaim. But you’ve been everywhere talking  about Disobedience: mainstream press, queer press. I think some promoters think  we’re living in a time when gay is mainstream, so niche press sometimes gets overlooked. So, thank you for not overlooking us. As a producer, why is it important to reach out to queer media with a film like
Disobedience?

If you’re queer, your subjectivity is not in the margins — it’s front and center for the life you’re leading. But mainstream stories have pushed queer stories into the margins of storytelling, and I think that’s what’s so wonderful about Sebastián. His film before A
Fantastic
Woman [Gloria] wasn’t a queer story but was about a 58-year-old woman’s dating life and her sex life — again, something that in storytelling is not front and center. Fantastic
Woman was about the experience of a trans woman, something that’s not normally front and center in the story.

So, this film is about two queer women struggling to be free to love who they want to love, so I’ve gotta say, hats off to Sebastián. He does the opposite of objectifying things; he subjectivises things.

And yeah, in terms of speaking to queer outlets, I mean, it’s essential. How would we make this film and then push you into the margins? That would be ridiculous and wrong and unthinkable.

What kind of measures were taken on your behalf to avoid falling into the male-fantasy-gaze trap that somany lesbian films end up in?

I can’t claim that I did anything apart from entrust myself into Sebastián’s point of view, and I knew that he doesn’t objectify women or men, or anybody. He has empathy, and he makes them into real people. Rachel McAdams and I just trusted him.

The male gaze doesn’t always have to be objectifying, and I think his point of view on how these women desire each other, I find
it beautiful. He’s the auteur. He authored the whole film, and the story; I can’t claim anything apart from being clever enough to trust him. [Laughs]

Some people claimed the gaze in Blue is the Warmest Color was male, and problematic because of that. Are there any problematic lesbian or queer films you’d seen prior to Disobedience that were in your consciousness while shooting this movie?

No. I did see Blue is the Warmest Color and I enjoyed it, even though there were people who perhaps didn’t. Listen, just to see a woman loving a woman and that being represented was very exciting. I liked the film very much. But no — I didn’t have a “to do or not to do” list, and I certainly didn’t research lesbian films. I looked into my heart and how I love this person. It was very emotional and vulnerable and full of yearning, and I didn’t have any other references in my mind. I don’t believe Rachel McAdams did either. We certainly never talked about it. I just loved this person, this woman.

What parts of yourself did you tap into for a role that essentially centers on same-sex desire?

It doesn’t feel any different. It felt different in that it’s softer and more vulnerable, but that might not be true with all women, but certainly with Esti it was. We’d been childhood friends and we’d known each other. We had a huge history and we were in love. She was my first love, and yeah, it felt like love. I didn’t have to open a different door in my brain; she’s just the person I loved. So, I didn’t really think of it in those terms.

Let’s talk about how liberating that sex scene is: How do you hope it may influence other queer people who feel pressure to live an inauthentic life?

I hope this film is inspiring to anyone who feels like they’re not free to love who they want to love. We’re saying as actors that love can be an act of defiance, and sometimes one has to be disobedient to the social norms around us. To be free, sometimes it costs a lot, it’s not always easy. So, I’m not going to glibly say, “Just do it.” It’s hard. It’s really hard. But I hope the film is inspiring, but also realistic. It shows the incredible struggle that Esti goes through with her sexual identity. So, I mean, I hope it will inspire people.

What’s the closest you’d come to playing a lesbian character previous to Disobedience?

I’ve never played a queer character at all.

Have scripts come your way and you’ve turned them down?

I’ve been offered very few. Maybe there are more being written now, but in my career, I think I was offered once a script about a straight woman who had an affair [with a woman], but the story didn’t … I mean, I loved the politics of it and the queerness of it, but the story wasn’t quite deep enough, somehow. But I would love to represent and play more queer women, so yeah anyone who has any ideas…

Aren’t you playing actress Olivia Colman’s lover in the period drama, The Favourite?

Oh yeah, in the next film. She’s a married woman, but she’s also my lover and confidant and best friend and advisor, and really is actually running England — or so she thinks. But yeah, they’re lovers. They’ve been lovers for years.

Before all these queer-oriented roles, you played the Wicked Witch of the East in Oz the Great and Powerful. What do you think that did for your gay following?

I didn’t know it did anything for a gay following! I’d love for that to be true. Is that true?

Oh, that’s fantastic! She’s a strong kind, yeah. That’s fabulous. Thank you. I actually wanted to play her like Tim Curry in The
Rocky Horror Picture Show. I actually thought she was kind of a man in drag. I felt like she was Frank-N-Furter, and I talked to [director] Sam Raimi, but he had never seen Rocky Horror.

Growing up with Jewish and Catholic parents, what were you taught to believe about the LGBTQ community?

My ma’s passed away now; she died in her 80s, and my dad is nearly 90. They had me in their 40s. They had gay friends — homosexual male friends — but I wouldn’t say they understood in the way that my generation understands queerness. I guess they were kind of sheltered, I would say.

How are you raising your 11-year-old son, Henry?

He is just of a generation where he’s kind of — he’s colorblind. He just doesn’t think in categories. He thinks in a very free away that people should just love who they love. He sees everyone as just part of the human race. He doesn’t really see difference at all, so that’s good.

You have another child on the way, with your husband, Daniel Craig. If one of your children came out to you and Daniel one day as queer, how do you imagine you might respond?

I’d be very happy for anyone I know and love to love whomever they want to love.