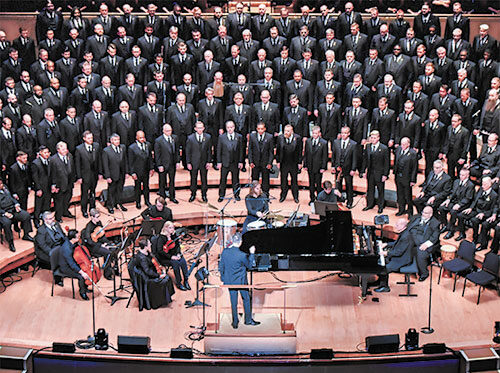 The Turtle Creek Chorale announced Thursday that it will now be joined by the Unity Choir, a program of Project Unity, at the two performances of Let Us March On! this Saturday and  Sunday at the Meyerson.

“We are grateful that our Unity Choir will join the Turtle Creek Chorale on stage to sing songs of unity, love, and hope,” Richie Butler, founder and Chief Visionary Officer of Project Unity said in a press release. “We believe music is a great uniter and the power of music in times of unrest and conflict can be quite healing. These performances will honor struggles of the past and the present, while inspiring hope for a better future.”

Let Us March On! will feature the world premiere of “Dreamland: Tulsa 1921,” that honors the victims of the 1921 Tulsa Race Massacre.

“We are honored to be joined by the powerful voices of the Unity Choir for these meaningful performances,” Sean Baugh, TCC Artistic Director and Conductor, mentioned in the releae. “The power of song is truly magnificent and we hope the combination of our voices and communities will demonstrate how impactful the development of this concert has been for the Chorale.”

Project Unity was founded in the wake of the shooting of five Dallas Police Department officers in 2016 in an effort to build racial unity and its Unity Choir works to confront racism through music.

The Saturday performance is at 7:30 p.m. and Sunday’s is at 3 p.m. Click here for information and tickets.