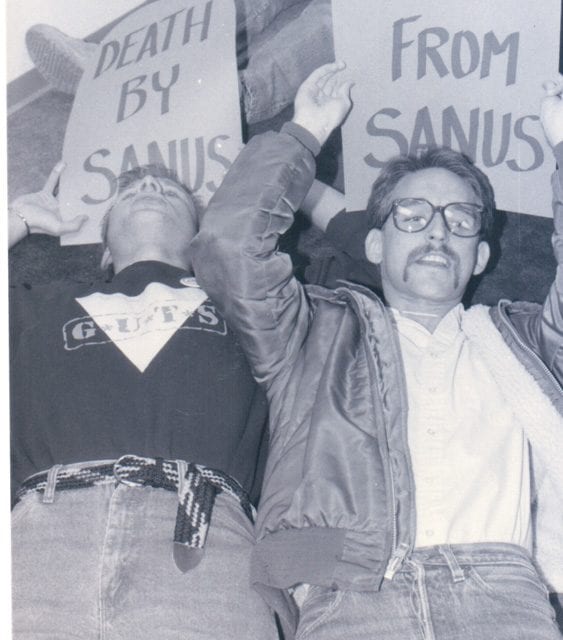 Think your insurance company is killing you now? In 1989, Irving-based HMO Sanus almost killed dozens of its customers in Dallas and thousands more across the country by refusing payment for one of the first drugs that prevented an opportunistic infection.

In January 1989, Sanus announced it would stop paying for pentamidine aerosol treatments, which prevented pneumocystis pneumonia that was taking the lives of many people with AIDS. The company called the drug experimental because the Food and Drug Administration had not given final approval of the medication. The drug was one of the first effective drugs used in the fight against AIDS.

Dallas Gay Alliance President William Waybourn told the Dallas Morning News at the time, the decision was “a form of patient dumping.” Those who were no longer covered by Sanus were going to Parkland or the AIDS Resource Center for treatment.

Resource Center began giving pentamidine treatments to people without insurance in 1987. That program developed into the Nelson-Tebedo Clinic.

Waybourn said adding 35 patients that had contacted the Resource Center after being dumped by Sanus would bankrupt the agency. Pentamidine treatments each cost $165 and were usually administered twice a month. Resource Center was already treating 80 people with no coverage.

G*U*T*S — Gay Urban Truth Squad, a precursor to ACT-UP — staged a die-in at Sanus’ office in Irving. About two dozen G*U*T*S members walked into Sanus’ office with tombstones and laid down in the lobby and hallway.

Geoff Staples was one of the protesters. He said several people handcuffed themselves to the desks. Although Sanus only had one floor of the 10-story building, they evacuated the entire building during the protest. Who knows what this healthcare company did after the protesters left, knowing people with AIDS had been in their office.

After the protest, the company announced on Feb. 16 that it would resume payments for treatment. While the Morning News printed four articles on the Sanus controversy over pentamidine, they never mentioned the protest.

Please help us identify the names of those in the pictures. Most of them died before medication that made HIV manageable was available.