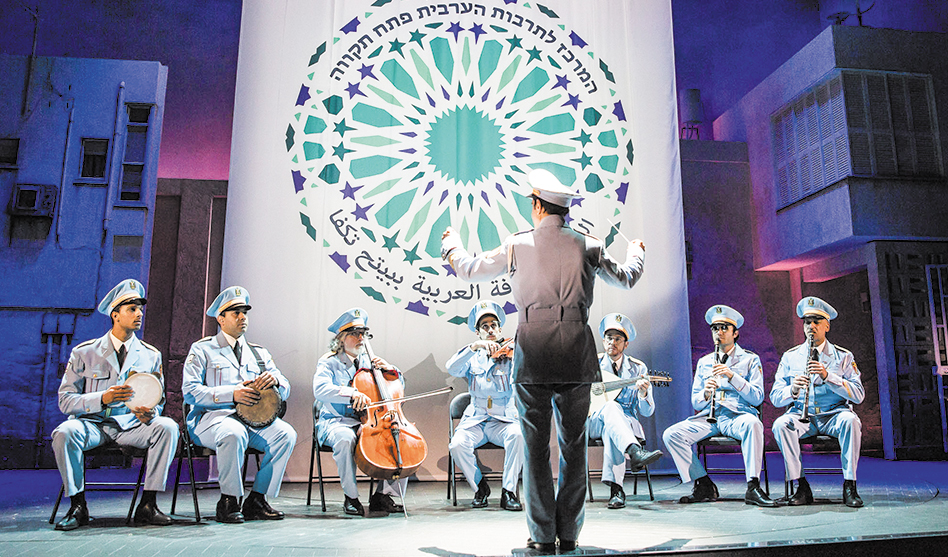 The national tour of the small-bore musical ‘The Band’s Visit,’ winner of 10 Tony Awards, arrives
in North Texas in an historic co-production with Dallas Summer Musicals and AT&T Performing Arts Center.

Right before the film version finally lands in cinemas, you can remind yourself of the magic of Andrew Lloyd Webber and T.S. Eliot’s Cats (Nov. 5–17). That’s followed by Dear Evan Hansen (Nov. 26–Dec. 8), from the composing team of Pasek and Paul (La La Land, The Greatest Showman). Swinging into the new year, the Blue Man Group performs (Jan. 15-19, 2020) as the first add-on, followed by The Band’s Visit (Feb. 4–16) in an historic co-production with AT&T Performing Arts Center. Come from Away (March 10–22), about humanity in the immediate aftermath of 9/11, then takes the spotlight, followed by Rent: The 20th Anniversary Tour (April 14–19), a special add-on to celebrate the queer musical’s milestone. For the spring, Webber and Rice’s early masterpiece Jesus Christ Superstar (April 28–May 10) celebrates its 50th anniversary. Then cool down with the stage adaptation of Disney’s Frozen (June 17–July 12). To close the season, grab a shaker of salt for Jimmy Buffett’s Escape to Margaritaville (July 28–Aug. 9). All performances (except The Band’s Visit) take place at Fair Park Music Hall. DallasSummerMusicals.org.

Performing Arts Fort Worth (Broadway at the Bass)

PAFW will first present a new production of The Phantom of the Opera (Sept. 24–Oct. 5), followed by Miss Saigon (Dec. 3–8) from the creators of Les Miserables. Betty Buckley won’t be in it, but you can still see the national tour of the revered revival of Hello, Dolly! (Jan. 14–19, 2020). The following month, Nickelodeon’s The Spongebob Musical (Feb. 20–23) lands everyone’s favorite sea-dwelling invertebrate character on the big stage. The super megahit Hamilton (June 9–28) returns to North Texas. And Come from Away (July 7–12), Escape from Margaritaville (Aug. 11–16) and Jesus Christ Superstar (Aug. 25–30) role over to Cowtown to close the season. BassHall.com.

The Broadway Series returns with two winter performances: The return of the chamber musical Once (Nov. 22–24) and Once on This Island (Dec. 17–22), about an islander’s tropical journey. The musical adaptation of Alice Walker’s thought-provoking 1982 novel The Color Purple (Jan. 7–12) takes over, with The Band’s Visit (Feb. 18–23) following with its Tony- and Grammy–winning score by David Yazbek. Love meets the sculptural rhythms of George Gershwin in An American in Paris (May 20–24), followed by Bandstand (May 26–31), a nod to America’s big band golden age, and The Spongebob Musical (July 14–19). All performances at the Winspear Opera House. ATTPAC.org. 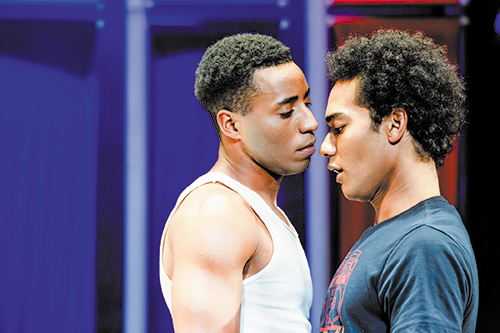 Cara Mia tells a timely tale of a same-sex romance between two homeless youth in ‘Swimming While Drowning.’

The Tony Award-winning regional theater starts off its season with In the Heights (Sept. 21–Oct. 20), Lin-Manual Miranda’s story of New York’s Washington Heights neighborhood at the Wyly Theatre. Then the Kalita welcomes Ann (Oct. 15–Nov. 10), a tribute to former Texas governor Ann Richards. DTC closes the year with Charles Dickens’ A Christmas Carol (Nov. 22–Dec. 29), the company’s annual holiday add-on at the Wyly. The American classic Little Women (Feb. 7–March 1, 2020) runs at the Kalita. Next is American Mariachi (March 14–April 5), about an all-female mariachi group, at the Wyly. Family and education collide in Pipeline (April 3–May 10) at the Wyly’s Studio Theatre, followed by The Supreme Leader (June 3–July 12), a satire about dictator Kim Jong-Un’s time at
Swiss boarding school.
DallasTheaterCenter.org. 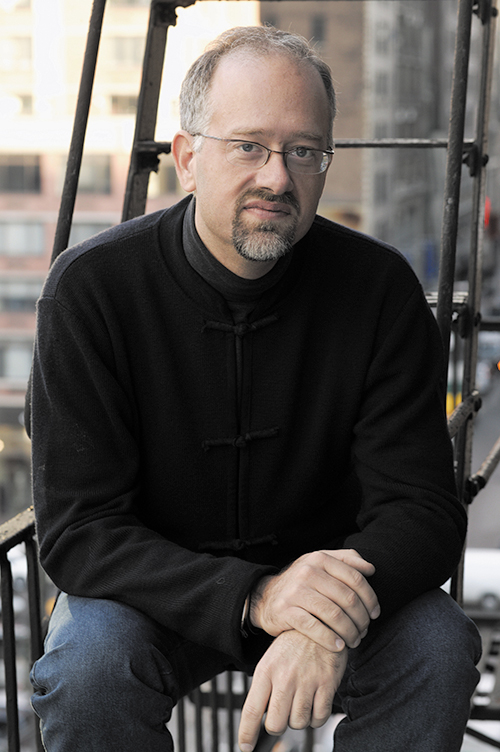 Dallas’ Doug Wright won a Tony and a Pulitzer for his play ‘I Am My Own Wife,’ to be presented by WaterTower Theatre in April.

Before the queer troupe begins its 19th season, Uptown Players has three more shows left at the Kalita, including the last chance to see The Cake (Aug. 23–25, reviewed this week). Then for Gay History Month, UP is producing two add-on shows: Bright Colors and Bold Patterns (Oct. 18–28), a hilarious solo show featuring out comedian Paul J. Williams; and Cooties (Oct. 19–27) a fast-paced romcom presented by Flexible Grey Theatre Company. The new season officially gets underway with Nuncrackers A-Men! (Dec. 6 -15), Dan Goggin’s Christmas follow-up to his smash comedy franchise. To begin the new year, the company hosts its annual fundraiser Broadway Our Way (Jan. 16–19, 2020), which features an array of Big Apple hits. Fun Home (April 10–26), written by Tony-winning lesbian playwright Lisa Kron, follows with the first locally-produced version of the hit play, with the legendary drama Six Degrees of Separation (May 29–June 7) a month later. Tune in for Head Over Heels (July 10–July 26), the last mainstage production of the season, and the world premiere of Del Shores’ A Very Sordid Wedding (Aug. 21–30), an add-on season closer. UptownPlayers.org.

The Addison company ends its 2019 season with the divine musical comedy Sister Act (Oct. 24–Nov. 10). Cirque Holidays (Dec. 5–22), a showcase of the diversity of holidays from around the world, opens next, followed in 2020 by Harvey (Feb. 6–23), a Pulitzer Prize-winning story about a guy and his best friend, an invisible man-sized rabbit. WTT then stages Dallas native Doug Wright’s empowering I Am My Own Wife (April 16–May 3), which follows a German transwoman as she survives through Nazi and East German Communist regimes. Finally, classic tale The Bridges of Madison County (June 11–28) ends the season. All performances at the Addison Theatre Centre. WaterTowerTheatre.org. 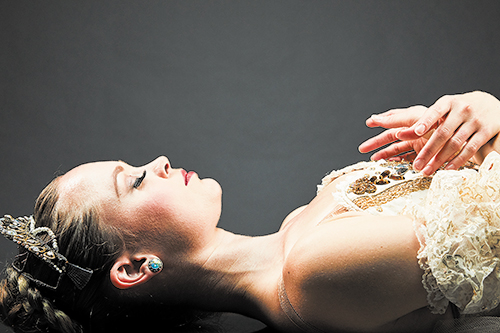 Texas Ballet Theatre kicks off its season in September with ‘Sleepy Beauty.’

After announcing a slew of regional premieres, this Fort Worth-based company starts its season with The Lifespan of a Fact (Nov. 7–Dec. 8), a true-ish story about a magazine fact-checker, then Ada and the Engine (Jan. 9–Feb. 9, 2020), stage adaption of the book about two innovative minds who form a partnership. Catch the regional premiere of The Children (March 12–April 12), which reflects the concept of generational responsibility. Church & State (May 7–June 7), a story of a Republican U.S. senator who faces a life-altering crisis after he makes an off-the-cuff remark during his campaign for re-election, takes over. In Into the Breeches! (July 2–Aug. 2), set during WWII, a theater company’s women stage an all-female production of Shakespeare’s Henry V, and prize-winning drama Between Riverside and Crazy (Aug. 27–Sept. 27) closes the season. StageWest.org.

Kitchen Dog starts its season with the world premiere of a love offering (Oct. 3–27), a new piece by gay Dallas playwright Jonathan Norton. Then comes Queen of Basel (Nov. 21–Dec. 15), a play about a real estate heiress who reigns supreme over Art Basel, followed by Alabaster (Feb. 13 – March 8), from playwright Audrey Cefaly, who’s also known for her award-winning LGBTQ drama The Gulf. Then the world premiere of A History of the Life and Voyages of Christopher Columbus By Washington Irving (June 4–28), a story about a man blackmailed by the Vatican into doing a literary assignment on a notorious sea-faring pillager, wraps up the season. All performances at The Trinity River Arts Center. KitchenDogTheater.org.

For its 27th season, Lyric Stage celebrates the power and presence of women, starting with Evita (Sept. 20–22), a deep look into the life of the former first Lady of Argentina. That’s followed by Mirette (Nov. 15–17), a charming tale of a girl who helps a tightrope walker regain his confidence. Beginning 2020 will be Abyssinia (Feb. 14–16), about a young songbird who’s lost her will to sing. Lyric finishes the year with Rodgers+Hammerstein’s Cinderella (June 12–14). LyricStage.org.

The bilingual, multi-cultural company is currently running its Latinidades: A Festival of Solo Shows Series, and this is your last chance to catch Your Healing is Killing Me (Aug. 23–25), the second show of the series, in which queer Chicano culture addresses the U.S. health care system; and Ursula (Aug. 29–Sep. 8), an emotive reflection of children separated from their families at the U.S.-Mexico border. More queerness follows with Swimming While Drowning (Nov. 19–Dec. 15), a riveting story about two homeless teens who find solace in a queer youth shelter. Next is The House on Mango Street (Feb. 21–March 3, 2020), a girl’s coming-of-age story set in a barrio. And finally, a compelling look into ethnic identity in Dael Orlandersmith’s My Red Hand, My Black Hand (May 15–31), part of Cara Mia and Soul Rep Theatre’s Café Negro Series. All performances at the Latino Cultural Center. CaraMiaTheatre.org.

Next month, Imprint presents the First Impressions Main Stage Showcase (Sept. 13–19 at Arts Mission Oak Cliff), where local playwrights can show their works. Imprint closes its second season, which was dedicated to women and their destinies, with Lizzie (Oct. 25–Nov. 9) at the Bath House Cultural Center, a rock musical about the infamous axe murderer. The company opens its new season with Puffs (Jan. 9–25, 2020), a Harry Potter-like play about magic school. The 3rd Annual First Impressions Festival for Local Playwrights (Feb. 25–29) comes the following month. Soon after, Here: A Devised Work (April 23–May 5), the collaborative piece here arrives, followed by Southern Comfort June 5–20), a musical based on the 2001 Sundance Film Festival documentary of the same name, which follows the last year of Robert Eads, a transgender man diagnosed with ovarian cancer. And wait for Rapture, Blister, Burn (Oct. 7–22), a musical chairs game of gender politics. Finally, American Psycho (Oct. 29–Nov. 14), the stage adaption for the 1999 thriller about yuppy serial killer Patrick Bateman, ends the season.
ImprintTheatreworks.org. 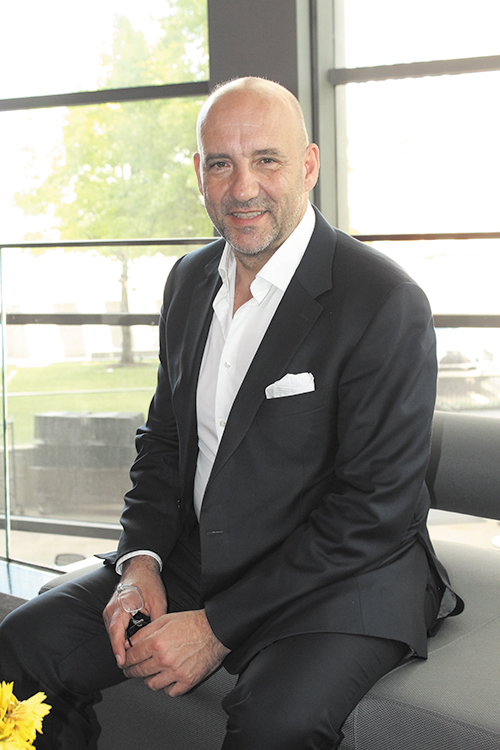 The Dallas Opera launches its 2019–20 season with Mozart’s The Magic Flute (Oct. 18–Nov. 3), followed by The Golden Cockerel (Oct. 25–Nov. 2). The company will then present a concert version of Verdi’s Don Carlo (March 20-28) along with a double bill, Pulcinella, in collaboration with Dallas Black Dance Theatre, and Jean Cocteau’s one-person performance La Voix Humaine (April 3–8). And to end the season, Rossini’s The Barber of Seville strikes (April 24–May 10). DallasOpera.org.

TCC welcomes its 40th anniversary season, starting with To All the Women We’ve Loved Before (Sept. 29), dedicated to the women in our lives, on the Meyer Symphony Center stage. Then TCC’s signature holiday tradition 40 Years of Fa La La (Dec. 13–15), featuring classic and new holiday pieces, moves over to the Moody Performance Hall. For spring, Unbreakable (March 27–29), a new choral musical from out Tony Award-winning composer Andrew Lippa, highlights hidden moments of LGBTQ history. Following is CLASSIC: The Songs That Made the TCC (June 28), a throwback to the chorale’s 40 years of music and memories, then to close out the year, TCC presents On This Shining Night (Dec. 20).
TurtleCreekChorale.com.

As usual, many shows will perform both at Fort Worth’s Bass Performance Hall and Dallas’ Winspear Opera House. The season begins with Vsevolozhsky’s The Sleeping Beauty (Sept. 6–8 at the Winspear and Oct. 18–20 at the Bass), and come the winter season, audiences will have multiple chances to see The Nutcracker (Nov. 29–Dec. 29) at both the Bass and Winspear, along with the uproarious Nutty Nutcracker (Dec. 20 at the Bass). Then a double program featuring ballets Firebird and Crash (Feb. 14–16 at the Bass), followed by a program of three short ballets (March 27–29 at the Bass). The season concludes with A Midsummer Night’s Dream (Winspear May 8–10, Bass May 15–17) TexasBalletTheater.org.