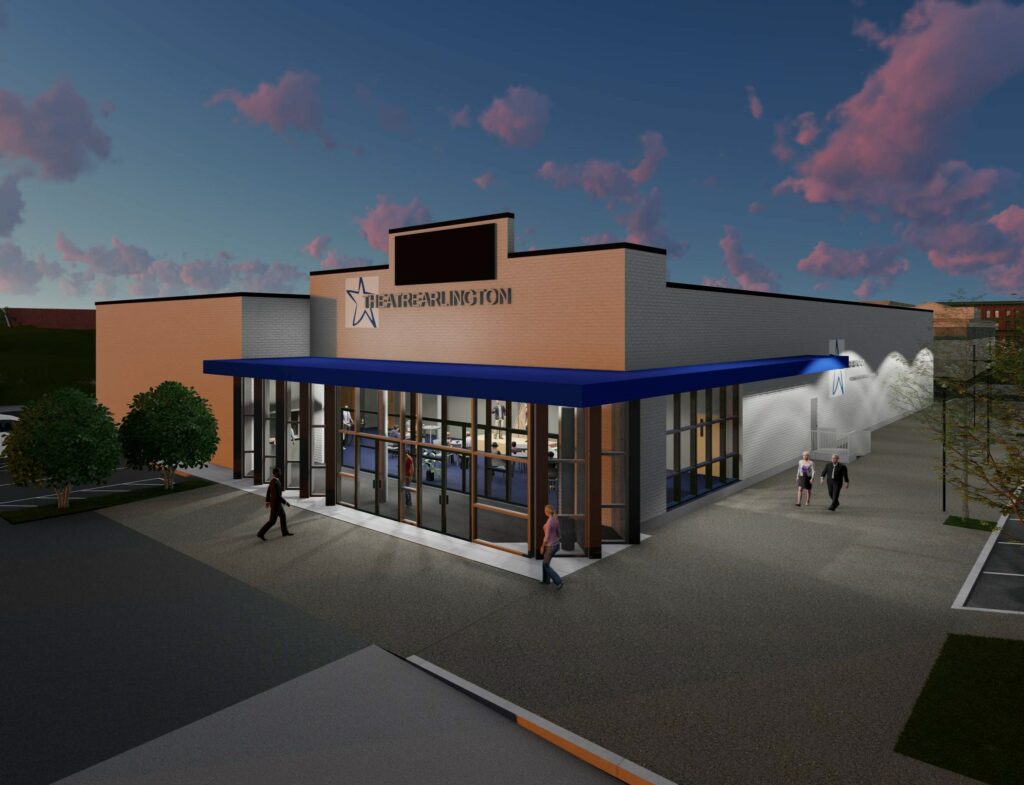 Rendering of Theatre Arlington’s new building which will open for its newly announced 2022 season. (Courtesy art)

Theatre Arlington’s executive producer Steven D. Morris is ready to welcome everyone back with a new season of shows. In a press release this week, the theater announced a slate of shows for its 2022 season. The next year will include musicals, family-friendly children’s programming, prize-winning dramas, comedies and the return of its signature holiday show. Perhaps more importantly all will be presented on the brand-new, state-of-the-art Arlington Tomorrow Foundation Theatre stage.

Additionally, Theatre Arlington’s Club Series will debut in the newly renovated lobby featuring the return of Club Cabaret along with the new Comedy Club and Play Reading Club.

The theater’s current renovation project will not only enhance the production quality of this 2022 line-up but the experience of live theater will improve for every patron, young or old. Combined with the theater’s targeted efforts to become a more diverse theater better representing our community, onstage and in the seats, Theatre Arlington will shine even brighter as the heart of the city’s cultural district.

When disco diva, Deloris Van Cartier, witnesses a murder, she is put in protective custody in the one place the cops are sure she won’t be a found: a convent! Disguised as a nun, she finds herself at odds with both the rigid lifestyle and uptight Mother Superior. Using her unique disco moves and singing talent to inspire the choir, Deloris breathes new life into the church and community but, in doing so, blows her cover. Soon, the gang is giving chase, only to find them up against Deloris and the power of her newly found sisterhood. Music by Alan Menken, lyrics by Glenn Slater, book by Cheri and Bill Steinkellner

It is 1936, and Boy Willie arrives in Pittsburgh from the South in a battered truck loaded with watermelons to sell. He has an opportunity to buy some land down home, but he has to come up with the money right quick. He wants to sell an old piano that has been in his family for generations, but he shares ownership with his sister and it sits in her living room. She has already rejected several offers because the antique piano is covered with incredible carvings detailing the family’s rise from slavery. Boy Willie tries to persuade his stubborn sister that the past is past, but she is more formidable than he anticipated. By August Wilson.

An eclectic group of six mid-pubescents vie for the spelling championship of a lifetime. While candidly disclosing hilarious and touching stories from their home lives, the tweens spell their way through a series of (potentially made-up) words, hoping never to hear the soul-crushing, pout-inducing, life un-affirming “ding” of the bell that signals a spelling mistake. Six spellers enter; one speller leaves! At least the losers get a juice box. Book by Rachel Sheinkin, Music and lyrics by William Finn, conceived by Rebecca Feldman.

Lovesick and desperate, sculptor Brindsley Miller has embellished his apartment with furniture and objects d’arte “borrowed” from the absent antique collector next-door, hoping to impress his fiancée’s pompous father and a wealthy art dealer. The fussy neighbor, Harold Gorringe, returns just as a blown fuse plunges the apartment into darkness and Brindsley is revealed. Unexpected guests, aging spinsters, errant phone cords, and other snares impede his frantic attempts to return the purloined items before light is restored. By Peter Shaffer.

The second in Pulitzer Prize-winning playwright Neil Simon’s trilogy continuing after Brighton Beach Memoirs last season where audiences met Eugene Jerome who was coping with adolescence in 1930’s Brooklyn. Here, he is a young army recruit during World War II, going through basic training and learning about life and love along with some harsher lessons, while stationed at boot camp in Biloxi, Mississippi in 1943.

Della makes cakes, not judgment calls – those she leaves to her husband, Tim. But when the girl she helped raise comes back home to North Carolina to get married, and the fiancé is actually a fiancée, Della’s life gets turned upside down. She can’t really make a cake for such a wedding, can she? For the first time in her life, Della must think for herself. This wonderful contemporary play is both laugh out loud funny and thought provoking. By Bekah Brunstetter.

This all-youth musical is part of TA’s Family Series.When James is sent by his conniving aunts to chop down their old fruit tree, he discovers a magic potion that results in a tremendous peach… and launches a journey of enormous proportions. Suddenly, James finds himself in the center of the gigantic peach. Thanks to James’ quick wit and creative thinking, the peach’s residents learn to live and work together as a family.

Everyone is excited about the former child stars’ return to television until they realize that as grown-ups, they are no longer cute and their talent is lacking. The only thing that can save the show is a Christmas miracle.