‘When Pigs Fly’ explodes with fun and fabulosity 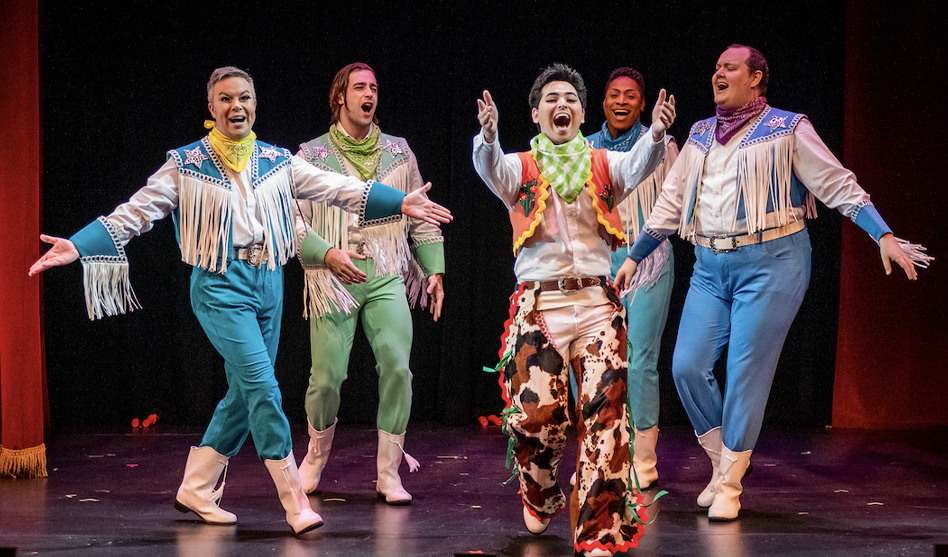 There was much to unpack in Uptown Players’ colorful new production Howard Crabtree’s When Pigs Fly. Only it’s like Mary Poppins’ carpet bag, where delightful treats just keep coming out — and they are all bedazzled and sequined. The company made its return to the theater in glorious, zany fashion that brings laughter when it’s needed most.

The show, which opened Friday, July 9, at the Kalita Humphreys Theater, is a campy musical comedy revue that delivers big on hilarity, dancing, singing and spectacle. Calling it a gay explosion may just be a masterpiece of understatement.

For such a big show, the cast was made up of only five men who never fail to fill the stage with grandiose personalities. That foundation was laid immediately in the opening title  number, and it remains strong and steadfast to the very end. Like a well-oiled machine, the cast oozed chemistry that brought pure magic to the stage.

But more on the cast in a minute. First, can we talk about the fabulous Bob Mackie costumes? In an interview prior to opening weekend, producer Craig Lynch and director BJ Cleveland discussed how they were able to bring in costumes the designer made for a previous iteration of the show that never ran.

For costume lovers, this show will be a dream. The costumes aren’t 100 percent Mackie’s, as he didn’t finish due to the previous tabling of the show. Additional costumes  such as the magnificent finale showgirls — were designed by Bruce Coleman, and even more costumes were designed by Suzi Cranford.

But Mackie’s work was evident in his grand designs that are both so magnificent yet made with enough whimsy to fit the show.

The show was conceived by Howard Crabtree and Mark Waldrop. Pigs centers on Crabtree, played here by the spunky Jacob Hemsath, who gave a performance that felt like it jumped out of an old cartoon. His expressions are over the top, and his physicality is abundant. But it’s all to the right degree as his character tries to pull together a stage show.

No one in the cast, though, is lost, whether through ensemble numbers or solo ones. Each has shining moments to play to his strengths and then some.

Duke Anderson’s singing and posturing in “Bigger is Better” is a glam slam, but, in contrast, his dancing and singing for the duet “Light in the Loafers” was marvelous alongside Michael Russell. Russell was the resident beefcake who knows how to fill out a fig leaf. But instead of relying just on body, his comical timing is sharp and even charming — and he has a killer voice.

Perhaps more featured in their roles were Walter Lee and Micah Green. Green, who has a beat face throughout the show, is genius in his performances as Annie Warbucks all grown up or as the midwestern director of the Melody Barn. He may also be the only actor right now who can make a pig and a tree look good.

Lee is prominent throughout many of the vignettes, but his centerpiece was a trilogy of torch songs which were revamped to speak to today’s audiences. Cleveland and Lynch asked that we keep those a bit under wraps for a surprise effect that is worth the payoff.

In one torch song, Lee shifted into “Laughing Matters” which gave the show a small break from the merriment. The song also brought a slight bit of pathos to the show. A ballad, yes, the song just reminded of the importance of laughter despite what’s going on in the bigger picture.

The show is a full-circle moment for Uptown Players. This marks the company’s 20th anniversary, but When Pigs Fly was also its first production. Twenty years ago, they were opening the show just after 9/11. This weekend, they opened during a pandemic and after a tumultuous election. The laughs, though, were there in spades and definitely needed.

Howard Crabtree’s When Pigs Fly by Uptown Players at the Kalita Humphreys Theater through July 25. uptownplayers.org.