THEATER REVIEW: ‘Working’ it out

DCT stages a comeback with “Working: A Musical” 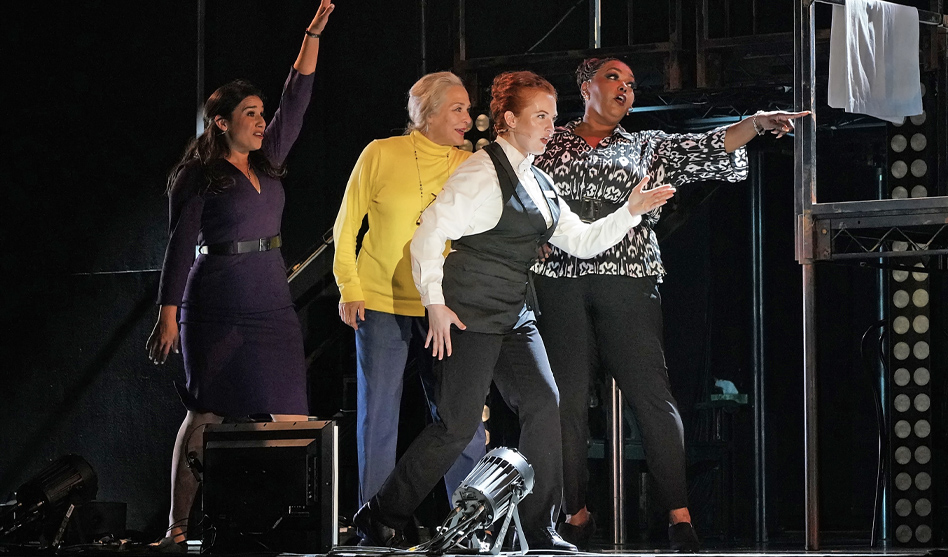 Steven Schwartz’s and Nina Faso’s musical will blow your mind, but in a much different way.

On paper, this show doesn’t leave much to the imagination other than imagining someone talk to you extensively about their job. That idea elicits a “That’s great” response as one slowly moves away.

Now add songs and dancing to that.

Working nine-to-five is the common thread among a slew of characters who monologue and sing their way through the show about various jobs like truck driver, fast food delivery guy, receptionist, housewife and more — all played by a cast of seven.

The show, which opened Friday, July 9, outdoors at the Annette Strauss Artists Square, does not have an intermission.

The question ends up being: How does this all work together so well?

Led by director Tiana Kaye Blair, the show is a patchwork of vignettes that are often disjointed and yet still manage to be thought-provoking, poignant and even a bit heartbreaking — particularly in its multimedia.

The production is punctuated by video interviews with real people discussing their jobs as well as their dreams, which ultimately works to connect the audience to the material. The rest is basically a revue that attempts to draw in viewers’ empathy about the steel mill worker, the trucker or the telephone solicitor — but without much backstory.

Despite updated revisions, songs such as “Brother Trucker” and “Millwork” still feel dated, where others range from exciting (“It’s an Art”) to droll (“Joe”) to touching (“Fathers and Sons” and “Cleanin’ Women”).

All these elements would seem to make it hard to muddle through Working but the cast worked their asses off to deliver incredible energy and conviction to each word said and sung on a set of multilayered scaffolding and stairs. The reward was heartfelt emotion in each actor’s multiple characters whether it was humorous, melancholic or obnoxious.

Blake Hackler’s wiry energy fit the bill for his more high-strung characters, such as the manager, tech support and the publicist, and then he contrasted all that when he dialed down his energy as the lamentable retiree.

Liz Mikel’s depth as the cleaning lady was an astounding moment to watch, and Alex Organ, who may have had the widest variety of characters, delivered strong, varied performances for each of his five.

Partly what makes this show unusual right now is that employment has been such an issue during the last year-and-a-half. So many people have been without work and here comes this musical about the ups and downs of work. Perhaps Schwartz should have updated the show with that aspect in mind.

But if there is a takeaway to “Working,” it’s the quest for dignity in work, which is brought home by the final number “Something to Point To.” Ironically, the entire show comes together at the end in spite of its previous incongruity. With a nod to healthcare workers and more real world interviews, Working clocks out movingly.

Working: A Musical by the Dallas Theater Center at the Annette Strauss Artists Square. Through July 18. dallastheatercenter.org.