The adventure of a lifetime 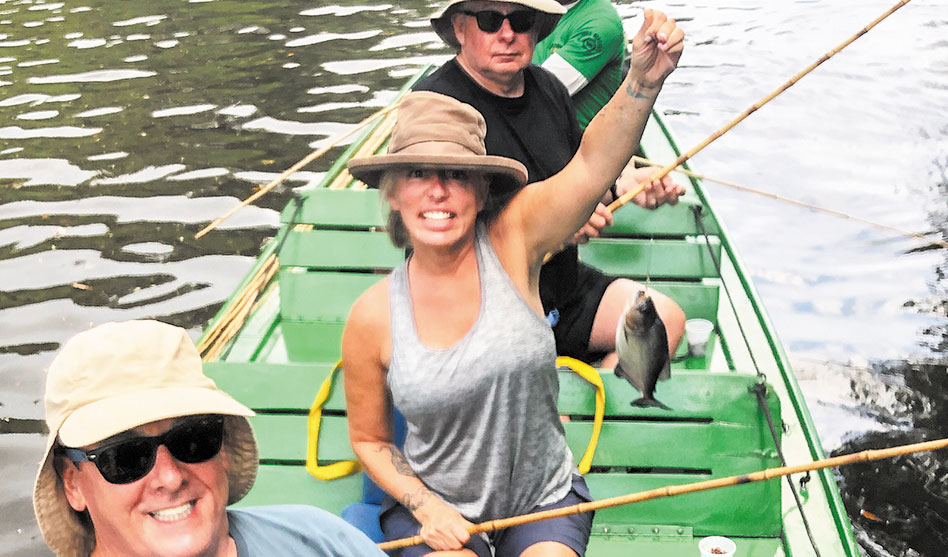 Aurthor Jenny Block baits a hook while fishing for piranha (above) and hikes through the jungle (below left). (All photos courtesy of Jenny Block)

A week exploring the Amazon opens a whole new world

If you’ve ever wanted to go on a truly wild adventure, hiking and small boat cruising the Amazon with Amazon Nature Tours is it.

I’m not going to lie: The very idea terrified me. I’m not particularly athletic or much of a hiker. I do love an adventure though, and when a longtime friend who had taken the trip assured me that I would fall in love with the Amazon, I decided to get my malaria pills and yellow fever shot and head to Brazil.

After a long day of travel, I arrived in Manaus, Brazil at 3 a.m. on a Friday. I was met by a driver from the travel company who took me directly to Hotel Millennium Manaus where I would be staying pre- and post-trip, and I took myself directly to bed. The good news was I had a whole day before I would be picked up and taken to the boat that would be taking me on my journey through the rainforest.

My trip began in earnest Saturday morning. I was greeted by staff at 6:15 a.m. in the lobby and met the other guests who would be on the trip. Turns out there were only two of them — a hilarious, super smart, well-traveled older gay couple. Luckily, we hit it off right from the start. The other scheduled guests apparently had some sort of emergency and had to cancel at the last minute. We jumped into the van and headed for the dock where we were picked up in a launch and taken to our home away from home for the week, the Tucano. And so, my journey began …. 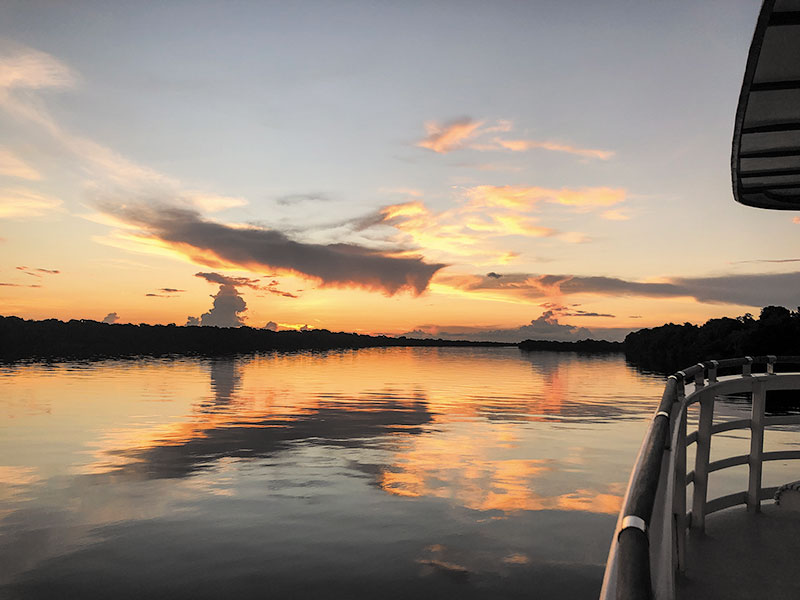 Sunset on the Amazon, as seen from the deck of the Tucano.

Saturday
The Tucano was enchanting — absolutely dreamy, simple and classic. I felt like I was in a Hemingway novel. It was full of rich, colored wood with simple décor and fresh blooms. The rooms are small but comfortable and air conditioned for sleeping. The shower is a head in the ceiling with a curtain to not soak the toilet just beside/beneath it. The only hot water is in the afternoon. But tepid water is perfect because it’s so hot outside.

We enjoyed breakfast onboard before heading out in another launch down the river. We saw monkeys almost immediately — a good omen for the whole week when it came to wildlife spotting. We headed back to the boat for lunch, then — as I would each day — I read and napped before our afternoon launch, from which we returned just in time for happy hour and dinner. Then it was straight to bed at 9 p.m. I knew that the daily 5:30 a.m. wake-up call was going to hit me hard.

Sunday
Somehow, I jumped up right at 5:30 when the wake-up call came, downing a quick pre-breakfast of oatmeal or granola and a cup of coffee before heading out on the first launch. We bird-watched and looked for monkeys and sloths. I found myself transfixed by the jungle.

After a full breakfast of the best eggs and manioc pancakes back on the boat, it was time for our first jungle hike. I went covered from head to toe for fear of bugs.

It was hot, but I soon forgot my discomfort as I became transfixed by trees and plants like I’ve never seen. The forest floor was impossibly dense, with vines tangled all around. Our guide knew every tree and leaf and bird and call.

After lunch back onboard, we visited a village of 15 families living in what we would call poverty. But as they played football, and our crew joined in, it was hard not to wonder about the “right way” or “best way” to live.

Dinner that night was local whole fish with manioc, followed by our night launch, where we saw a caiman, an iguana, dolphins, a kingfisher, herons and the “Amazon chicken.” Then it was lights out at 10 p.m. sharp, since we were warned that the next day’s jungle walk would be a hard one.

Monday
We were up at 5:30 again to drink coffee, gear up and head to the launch. We saw so many monkeys, brown capuchin and squirrel, right from the start. There are lots of kingfishers and herons, too. After breakfast, we headed back to the jungle. We hit much more difficult terrain that day and had to take a different path because of a fallen tree. We heard rain but didn’t feel it because we were so protected by the canopy of the forest. 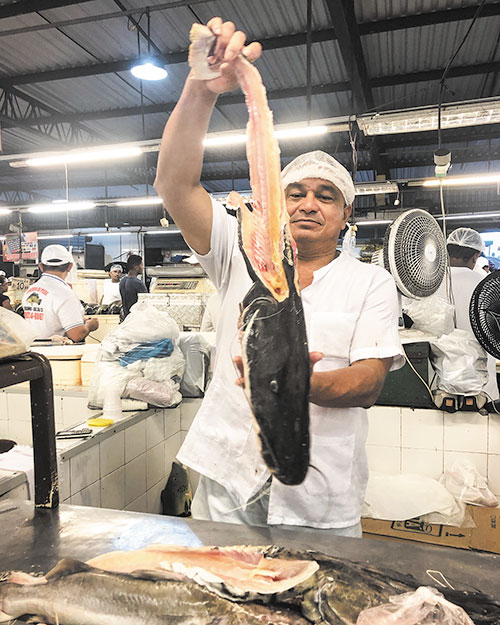 But then it poured, and we got soaked. I didn’t put on my poncho though. It was just too hot; it was better to get soaked. It felt amazing and cool, especially back on the water when the rain stopped, and the air felt cool even in the sun as the launched return us to the Tucano.

That afternoon it was time for the main event: piranha fishing! I baited my hook with raw heart and caught one on my first go, then another later. Mostly though, the piranha just stole the bait from my hook.

We were back on the boat for happy hour with boiled quail eggs, olives and salted peanuts, followed by catfish for dinner. Then we took off for another night launch where we saw fish-eating bats, and night jaws, and more kingfishers.

The best part of every night was the stars — millions of them. It seemed you could see the whole Milky Way, plus Jupiter and Scorpio, too. Then there are the gigantic trees in shadow. It was like ambling through a massive topiary garden as we cruised down the river.

Tuesday
On our morning launch, we didn’t see any monkeys. But the forest and the birds were just spellbinding. The guides made bird and rat and frog calls, and the animals answered through the tangle of jungle on either side of the river.

After breakfast, we headed out for a pretty tough hike with a local guide — required because the land belongs to the locals. It began with a rather steep incline to get into the forest. I had to laugh as he led us wearing shorts and a polo shirt and bare feet while we looked like we had jumped straight out of a safari catalog.

Back on the boat, I had the best shower and most delicious lunch; hiking will do that for you. Later we took a launch to sand bars. At the first one, we walked through the shallow water and squished our toes in the sand. On the second one, the crew played soccer, and I swam in the Rio Negro with Ed as the sun set and dolphins swam past.

We laughed as one of the crew ran towards the flock of birds ’til they took off into the sky.

At Happy Hour that night we ate the piranha we caught the day before, all fried up and delicious. We pulled off their heads and tails and fins and bit into the juicy delicious meat. After dinner, it was off to bed early for another big day ahead. So far, I had learned about swallows and herons and monkeys and rats. But above all else,

I learned to listen. 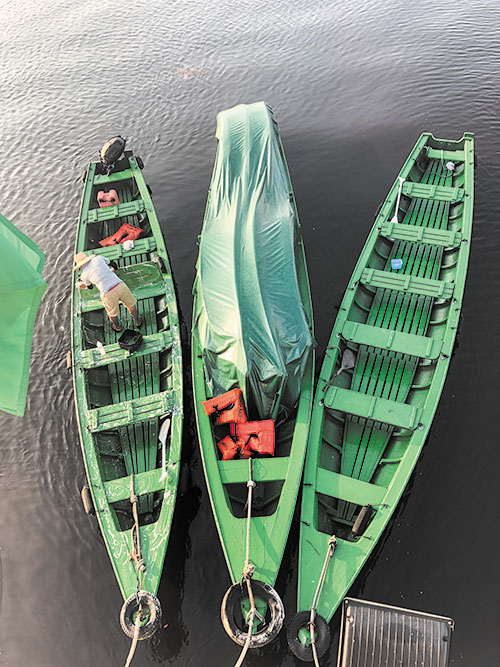 Wednesday
The next morning, the launch brought us to lots of monkeys and then birds and jungle scenery that made the world feel very big and our place in it very small. After breakfast we headed out for our jungle walk. There was a steep incline that I couldn’t have climbed without the help of my faithful companions. There were massive trees and a vine that looked like an anaconda. It was so hot that I was dripping from every pore, but the scenery was worth every drop.

That afternoon, we took the launch to visit a local family that builds boats and carves items from wood. I bought a miniature boat and a dolphin and a bracelet made of seeds. We visited their dogs and pigs and chicken and rooster. Pineapples grew from their massive plants and a vast diversity of fruit trees filled their primitive property
Back on the boat, we gathered for a dazzling sunset and the most incredible empanadas which I washed down with Guaraná Antarctica, my favorite Brazilian soda. After dinner, we prepared for our final night launch, but lightening cancelled our plans.

Thursday
On our last day, it was too rainy and windy and there was too much lightening for our morning launch so we slept late — 6:30 a.m.! After breakfast we went out on the launch and, thankfully, the rain stopped almost immediately. After lunch, we went for another launch and it was amazing. We saw four caimans and three sloths, along with floating houses and the incredibly magical spot where the rivers meet. You actually see the distinct line between the two. Happy hour featured an amazing guitarist and singer while we enjoyed caipirinhas and pre-dinner bites. After a glorious dinner, we said good-bye to the crew. Since we would have an early morning with only a quick breakfast before disembarking.

Friday
It was very hot aboard the Tucano for our final breakfast after such a remarkable — dare I say, lifechanging, even — week. The food was excellent, and our guide, Ed, and the crew were the most kind and giving people. I only wished I could speak Portuguese so we could have talked more. I loved being on the Tucano. It felt like home immediately, and I honestly could have stayed aboard for weeks more.

But we were off the boat by 7:30 a.m., headed for city tour in the cool of the van’s air conditioning. We went on an inside tour of the opera house and then a driving tour of the city, with a stellar stop at the Mercado Municipal where there was the most incredible array of fish. I drank Açaí with honey and swooned at the market’s offerings, wishing I had a kitchen and a houseful of guests to cook for.

I headed back to the hotel for dinner, just in time to experience the wildest of storms with thunder and lightning the likes of which I’ve never experienced.

Saturday
I caught my flight home with my head spinning and my heart already longing to return to the Amazon. It was more magical than I could have ever imagined, and I know there are still so many secrets left to discovered beneath the dark water, deep in the jungle and beneath the tangle that covers the forest floor.

One thing I know for sure, the rain forest and the debt and care we owe it will never be just theoretical for me ever again.