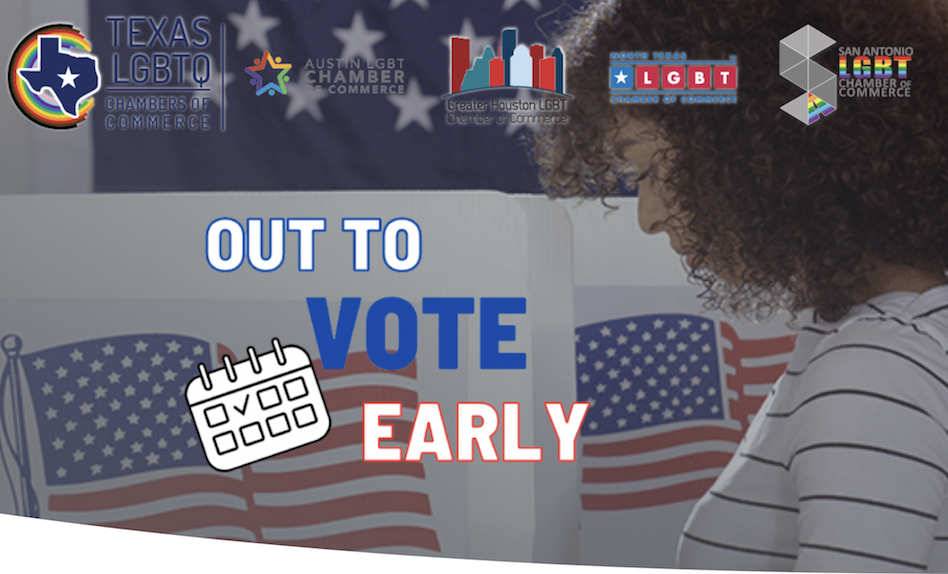 The Texas LGBTQ Chambers of Commerce rolled out Out To Vote Early, a nonpartisan initiative designed to educate and motivate people to vote early.

With early voting, one can mitigate risk and more safely and securely participate in our democracy, they Texas LGBTQ Chambers wrote in a press release. COVID-19, the cutbacks at the U.S. Postal Service and the potential for natural disasters bring many challenges and uncertainties ahead of the 2020 election. The goal of the initiative is to make sure every vote gets counted while reducing danger and avoiding chaos and long lines at the polls.

“As Chamber leaders, we have been preparing a Get Out The Vote Campaign for the 2020 general election,” said Tony Vedda, president and CEO of the North Texas LGBT Chamber of Commerce. “We think Out To Vote Early is a more practical and relevant message considering the impact COVID-19 has on the voting process.”

Tammi Wallace, president & CEO of the Greater Houston LGBT Chamber of Commerce, agrees. “Our geographic location makes us susceptible during the most active hurricane season in modern history. Early voting gives voters the choice of day, time, and location which is more important in 2020 than it has ever been before.”

More and more Texans are exploring their early voting options. For the 2020 presidential primary election, more people voted early (2,071,745) than voted on Election Day (2,012,686). The Lone Star State ranked 41st in the country in voter turnout in 2018. The Texas LGBTQ Chambers of Commerce believe it should be easier to vote, and every Texan should be confident their vote is counted.

Austin LGBT Chamber of Commerce CEO and President Tina Cannon, added, “The Out To Vote Early campaign is just the first step in the Texas LGBTQ Chambers’ advocacy efforts to make sure all Texans are included and respected.”

How to Get Involved: Participants will receive Out to Vote Early content to share with their community, network, fans and followers. Participating individuals and groups will be provided with a uniform toolkit to help bring visibility and awareness to, not only voting, but voting early. Participants can be individuals, small business owners, employee resource groups, non-profit organizations, community organizations, school groups, neighborhood associations, and anyone who is making a plan to vote.

About the Texas LGBTQ Chambers of Commerce