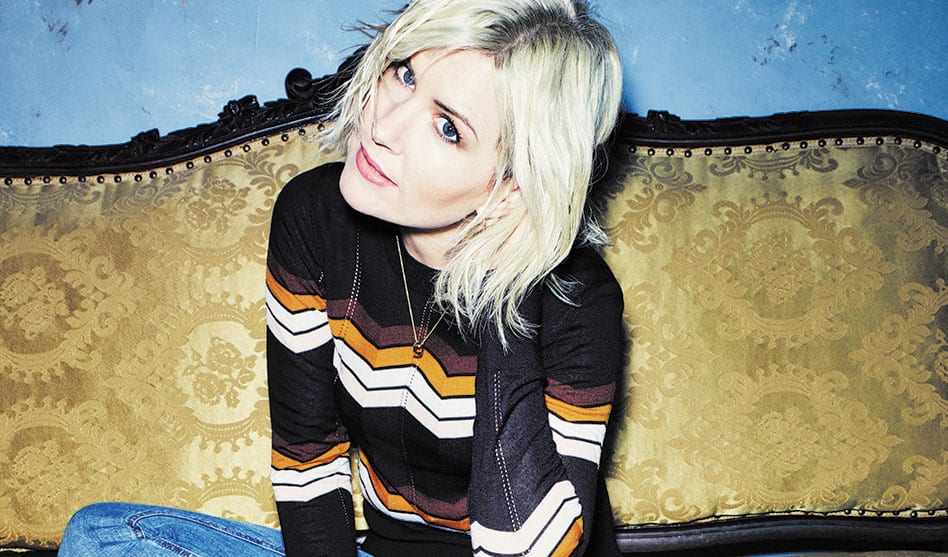 With the release of her first album in 6 years, Dido reflects on gay fans, genre-hopping and realizing she’ll never be Madonna (that job is already taken)

If you want Dido to tell you a story, don’t be weird. It helps if you’re a fan. It especially helps if you’re a fan in a sea of other fans, “White Flag” sweeping you away to that soothingly introspective Dido place at one of her shows. Just don’t be some nosy journalist out to get a good Dido story — you won’t get a good Dido story. And don’t ask her to say her full, iconic birth name. She’ll playfully decline because the name — Dido Florian Cloud de Bounevialle O’Malley Armstrong — is “terrifying,” she says.

But when I recently jumped on the phone to discuss the British chill-queen’s first album in six years, Still on My Mind, Dido did tell stories (“Sand in My Shoes,” from her 2004 album Life for Rent, is literally about sand in her shoes!). In fact, according to a rep for the artist who called me after with some feedback, she apparently broke through her usual press-shyness, laughing her way through our talk about dressing like Madonna, getting over stage fright and being a “messy” producer.

Dallas Voice: Has a gay man ever told you your full name would make a good drag name? Dido: [Laughs] Oh, I love that.

If I asked you to say your full name, would you? Do I have to? [Laughs] It’s just terrifying. I love getting other people to say it, and it’s actually really funny because they always say it slightly differently, but I’ve never thought about it like that. But I feel better about it now!

You grew up as a Madonna fan, like many gay boys. Yeah, like most everyone! She’s just amazing.

Was your interest in her something you shared with your gay friends? With everybody. I was trying to dress like her in the “Papa Don’t Preach” video as soon as I could, as soon as I was allowed to cut my hair off and dye it blonde. But I remember going to see Desperately Seeking Susan with my mom, and I think even my dad came, and we were all just completely enamored with her. She was just the most awesome thing ever.

What about Madonna appealed to you at that age? She just felt so strong and could sort of do everything and was so unique and so confident. She just has this confidence that as a teenage girl I was looking at like, “Wow.” Everything she wore in the video, when you’re a teenage girl, and you’re just feeling really insecure and anxious and not comfortable in your own skin, you see this woman being so proud to be herself. I think she’s so inspiring.

And you dressed like her for a period of time, didn’t you? I did! Allegedly, according to my husband, I still do! I came down the other day and he was just like, “You know, you’re dressed as the ‘Papa Don’t Preach’ video right now?” And he was just laughing because my hair is really white-blonde at the moment.

My next question was gonna be: When did you realize that being Madonna wasn’t possible? I can still dream.

What song of yours do gay fans tell you they connect with most? Originally it might’ve been “Take My Hand.” That was the first song I wrote, I think, that ever got recorded, and I remember that always used to connect.

After 20 years, how do you end up coming back to a sound that is quintessential Dido? I don’t really know. I did this album in a very instinctive way. I didn’t really overthink anything. Because when I was making the record, I didn’t have a record deal. When I was doing this album, and I wasn’t even sure I was gonna put this out, I just thought, “We’re just gonna do it.” It inadvertently ended up very similar to when I made No Angel, and I didn’t think anyone was going to hear that record. I think a lot of the feeling of starting again and that feeling around that time 20 years ago sort of crept into this record, just because I felt like what I’m having is a good time here, and I might put it out; there was a point I even thought I’d give these songs to someone else. I just didn’t know.

I was learning all sorts of stuff about production, so a lot of them, I was producing and doing the beats more so than I’d done before on songs like “Hell After This” and “Mad Love.” I was experimenting, and people started really enjoying that sound because it was a bit less professional than my brother [laughs] — he’s much more professional with his productions; mine are way more haphazard. I have such low patience, and everything I do has to be in one take because I’m just like, “I don’t know, this edit button is just driving me mad,” and I’m always deleting stuff. I basically record everything in one take, every beat and every bassline, so it’s a mess. But I think it’s created a bit of fun on this record as well.

Are the long breaks you take between album releases a necessary part of your creative process? I think it is. It just sort of happens. I don’t know how to write any differently because I’m writing from such a personal point of view, like I have to go through the experiences to be able to write them. I’ve never approached making records in any sort of methodical way; it just happened. I go through life and I write songs because that’s how I see the world, and it’s what I see when I look around the world and how I process any thought I have, and then it sort of builds up into a record. It feels like they all sort of just appear.

Do you read reviews? I read some of them, yeah. I read a couple really lovely reviews.

I wondered what you thought of Uncut referring to the dancier songs on this album as “mum at the disco.” [Laughs] I love it.

I mean, I’m here for “mum at the disco” music. Could be a whole new genre of music! Can you imagine? I love it! I didn’t read that, but yeah, I do think that should be a new genre, basically. I just think on this album I’m pretty unashamedly just doing the music I like and also, a lot of people on this album — well, it’s basically me and my brother — were on the first record as well. So, it’s sort of nice. I mean, I haven’t changed my friends much in the last 25 years, so I think there’s a familiarity there. It’s so nice that that can just be who you work with through your whole career.

Is there a genre of music you want to explore completely outside the musical identity you’ve created for yourself? I don’t know if I know how to. I think the nice thing about what I do is I do so many different things on a record, so I can go from dance music to more hip-hip stuff. I don’t feel restricted. If I wanted to do something in a genre I haven’t done, I would do it because, in a way, it all works as long as there’s a song at the core. For me, that’s always been the sort of principle: to make whatever music you wanna make but have a good song. That’s what I tried to do anyway.

What’s the most unusual place that has given you inspiration for a song? I wrote “Sand in my Shoes” literally on a plane when I took my shoes off, and they were full of sand. One of those really stupid moments. It was actually a really stressful flight because my dad had got really ill, and I just arrived in L.A., and I wanted to go straight home. While I was on the plane, I was just writing, because it’s all I know how to do to get through. I sort of took my shoes off, and I literally had just run off the beach onto a plane, and all this sand went everywhere and sort of followed. Anyway, it was cool. It gave me the idea for the song. I wrote that whole song on the plane.

What about songs on Still on My Mind? The last song on the album, “Have to Stay,” we recorded it as I was writing it, and that’s what’s on there, as in that’s all just a first thought. [“Have to Stay’ was written about Dido’s son, Stanley Gavin.]

That probably doesn’t happen very often, does it? No, and it was really cool: I had the idea for the song, and I knew what I was singing, and the guy I was writing with was literally feeling out the chords and that’s why he doesn’t actually move chords, for the first two verses, because he’s getting to grips with what I’m singing. So, it’s actually making it up as we go along. I just love the feel of it. When I came to record it properly, it never felt the same, so I just kept that very original idea of it.

Because you’re used to recording in an intimate setting with your brother, I imagine taking songs from the record this close to you and performing them in front of massive crowds must feel a little different. It does.

How so? I sort of love it. When I first went on tour with No Angel, I was just like, “Oh my god, why are you making me sing these songs with other people [around]?” Like, they are so personal. I remember my manager saying to me, after running on stage and running away as soon as I’d sung, “It wouldn’t hurt for you to talk a little. You could say your name. You could say what city you’re in. Anything, just the basics. Like, ‘Hello, New York!’ Anything. Just say something because you just look so scared right now.” And it was really scary for me! Then I performed on stage for nine years, and I just have to say I genuinely have such cool fans and they make me feel we’re part of something together.

Before the days of having recording devices at shows, I remember journalists used to get so annoyed with me, like, “Why do you tell all these stories when you’re on stage that you would never tell us?” Like, “You tell stuff to your fans that you don’t ever say in an interview.” It’s not intentional. It just felt like a really friendly environment, and I’m quite an instinctive person, and if I feel comfortable, I’m a very open person, so it was just really funny. Because they’d come to the show and they were like, “I just did an hour interview with you, and you didn’t tell me anything, and then you get on stage and tell all these stories.” With fans, the feeling that I get back is such a two-way thing and such a magical thing.

Do you feel comfortable now? Yeah. Now I’m older so I’m like, “Yeah, whatever!”

So you’ll tell me a story then? No. You’re gonna have to come to a show. I just think I’ve always felt pretty comfortable singing the songs because I always have felt a lot of love coming from the fans, that they’ve made the effort to come out and see you, and you’re sharing an experience, and it just feels good to sing the songs live. It always feels different every night.