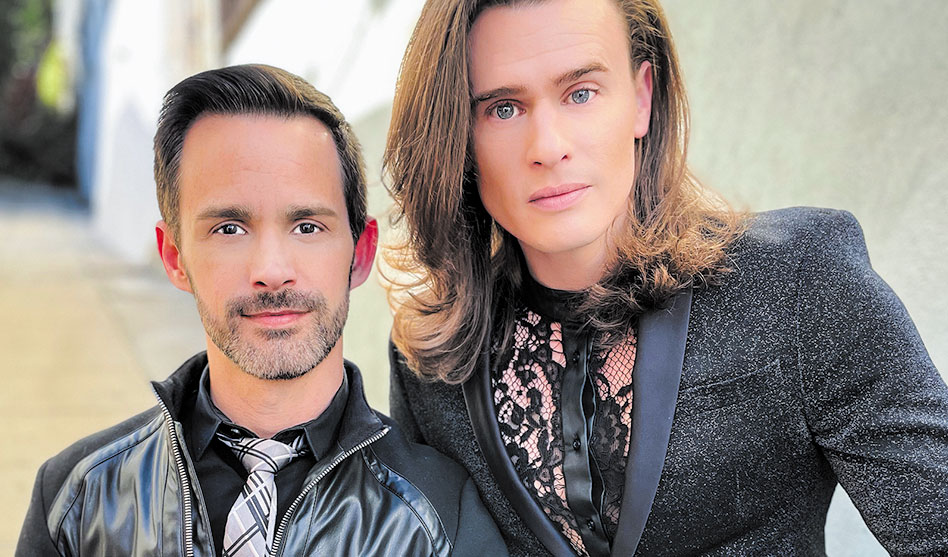 Blake McIver Ewing, right, and his husband Emerson Collins are on tour with their show I Dreamed a Dreamgirl

The pandemic clearly sucks, and it has for more than two years now. But big thanks are long overdue for all the creative types who still managed to provide entertainment during the dark days of COVID quarantine, whether from their living rooms or outside filming with their smartphones.

Staged readings, concerts, short films and theater pieces all had their Zoom moments in the last couple of years. But two performers turned their homegrown musical revue into a full-on tour.

Like all of us, Emerson Collins and Blake McIver Ewing were stuck at home in those lockdown months. But an opportunity came to the talented duo and real-life couple by way of the Public Theater of San Antonio.

“Del [Shores] and I had done our Sordid Lives streams, so I was doing that. But the theater called Blake and me asking if we had a show,” Collins said. “They were willing to do anything for their audience to enjoy some theater — and we had nothing but time.”

Collins and Ewing aren’t short on talent, and their talents have been displayed across stages and television screens.

Both were stars of Bravo’s The People’s Couch. Ewing was famous at a young age as the junior vocalist champion on Star Search, and he appeared in The Little Rascals and Full House. Collins — a longtime collaborator with Texas favorite Shores — appeared in and produced the films Southern Baptist Sissies, A Very Sordid Wedding and LOGO’s Sordid Lives: The Series.

Both have also worked locally with Uptown Players, most recently at the theater’s fundraiser revue Broadway Our Way this spring.

So when the San Antonio theater called, Ewing told them, “We’ll put together something for you.”

What they came up with is the early version of their show I Dreamed a Dreamgirl, which they are now touring and are bringing to Dallas on Sunday, July 24.

The thing was, they both acknowledged that their styles aren’t quite on the same page, and yet they have come up with a whole show of solos and duets.

“Our styles aren’t exactly copasetic,” Ewing said with a laugh. “My earliest vocal influences were from Disney.”

“And I sing like Josh Groban-lite,” Collins added. “When we first started dating, we wondered how would we ever sing together.”

And yet, here they are.

The title of their show comes from both of their Broadway loves. Dreamgirls is Ewing’s  favorite musical, and Collins is a big Les Miserable fan, hence the take on “I Dreamed a Dream.”

“We joked about this title forever,” Collins said. “We wondered what a mashup would be like, and now it’s our opening number.

When we first did the livestream, it was this terrible idea that became a hilarious mashup.”

The two began to create an actual show, and both put their collective skills to work. As time went on, and vaccinations happened, and theaters reopened, they fine-tuned the show. Meanwhile, Collins got to work booking the show, while Ewing arranged and produced the show’s music and mashups.

Before they knew it, they had a nine-city tour on their hands (well, nine cities so far).

“I reached out to the theaters we knew. We made a sizzle reel, and I thought four or five shows would be amazing,” Collins said.

The two-man show is a mix of music and storytelling. Collins and Ewing two talk about their relationship and careers, tying in showtunes, Disney favorites and deep cuts along with their unique selection of mashup medleys they both say “probably shouldn’t exist.”

But that’s what dreams are for.

I Dreamed a Dreamgirl is presented by Uptown Players at the Kalita Humphreys Theater. For more information and tickets, visit UptownPlayers.org.