Straight Pride attracts a crowd of 2 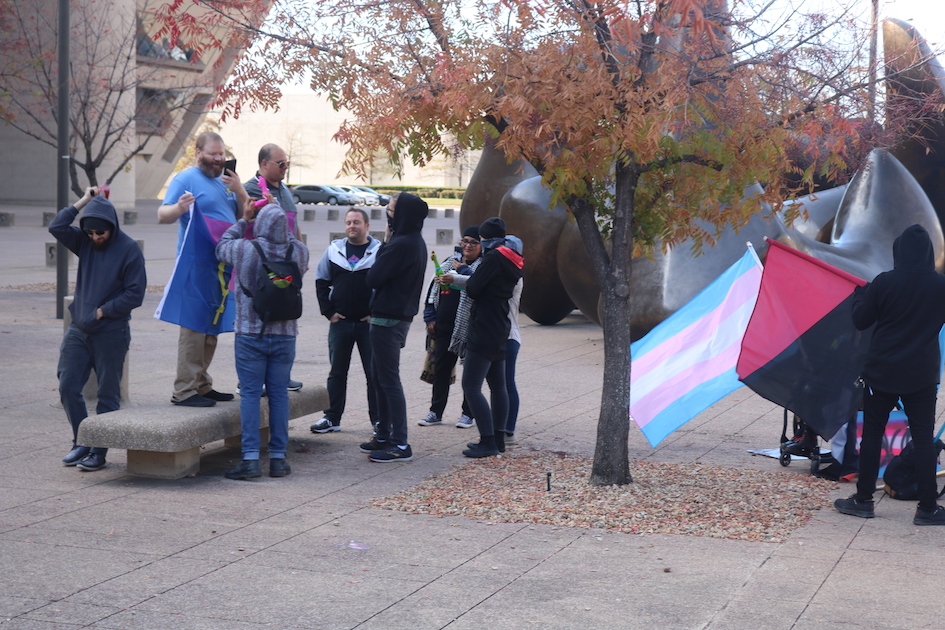 The two men on the bench were the only Straight Pride participants. (David Taffet/Dallas Voice)

Pride events always attract out-of-town crowds, and today’s Straight Pride at Dallas City Hall Plaza was no exception. All two of the participants were here from Boston. Not even Teresa Stephens Richenberger from Liberty City, Texas, the local organizer with Protecting Our Next Generation, appeared at the event. About 20 protesters showed up at City Hall Plaza.

One of the two Boston participants claimed he was kicked out of his home as a teen and was fired from his job because he was straight.

The two organizers complained about fees the city was charging along with the permit that would have amounted to about $12,000. They were shocked to learn from Jayla Wilkerson, a city attorney and trans activist, that a proposed trans march had to be canceled because they were going to be charged the exact same fees.

Reacting to a statement by Richenberger on Facebook that cities that are run by Democrats don’t welcome free speech, Wilkerson suggested Dallas’ LGBT community stage a Pride parade in her city and see just how welcoming they are.

One of the straight Pride people yelled insults at the transgender attendees saying, “We know there are only two genders.” He also said, “I’m part of the oppressed majority.” When two of the protesters got too close to the Straight Pride crowd of two, police separated them, ending the arguing. Some individuals approached the the straight pride duo to talk, one at a time, which changed no one’s minds and prolonged the pair’s visit to City Hall Plaza.

The Boston visitors, presumably from the group Super Happy Fun America that staged the Boston Straight Pride event this past summer, said this wasn’t the parade. They promised that one would be held in Dallas next year. That’s good that this wasn’t the parade, because there were no floats, no marching bands, no beads, no super happy fun. And next year, if Richenberger just brings a friend from East Texas, participation will double.