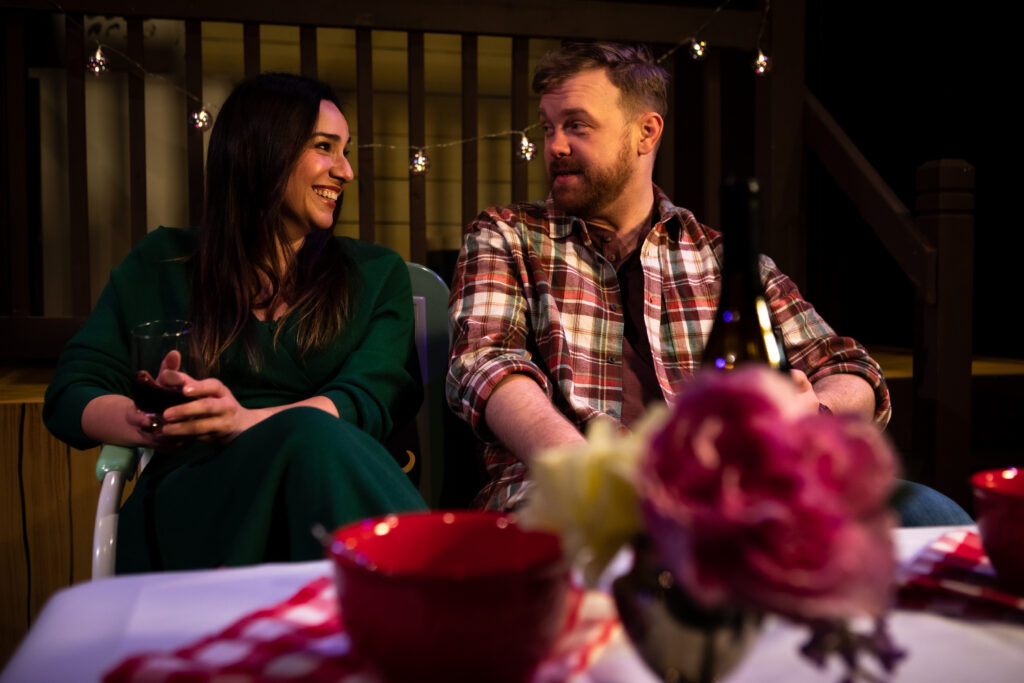 Theatre Three’s Maytag Virgin opened on Feb. 5 after a slight delay from its original opening date the weekend before. However, it provided a nice reason to get out after the cold snap had let up. Presented in Bryant Hall at the Kalita Humphreys, the Audrey Cefaly play runs through Feb. 20.

The two-actor show features Tiffany Solano as Lizzy, an Alabama school teacher who develops a friendship with her new neighbor Jack played by Ian Ferguson. Both bond over their careers as teachers, the deaths of their spouses and the life that comes after.

A wordy play, both actors handled the material with natural ease. As strangers becoming friends, Solano and Ferguson unfolded their chemistry throughout releasing the tension masterfully between the two.

What held me up in the show was the material itself. Cefaly crafted a fully-realized play but without knowing her own story, the “why” behind Maytag Virgin was difficult to land on. I never got the feeling she was working something out in some of these existential conversations the actors were having. The characters’ backstories were thoughtful but details felt more convenient than they did biographical.

The play also felt a bit too long and could have ended about two scenes early. This was detrimental to any affections toward the characters that could easily wane due to the mere length. Lizzy turned into a frustrating character that didn’t push the story forward – or rather extended the play unnecessarily.

The upside is that Maytag Virgin is rather sweet and touching and thanks to Ferguson and Solano, they took the audience on an emotional journey under the delicate direction of Whitney LaTrice Coulter. Jeffrey Schmidt’s set was clever and appropriately homey. With a fairly simple story and setting, Will Elphingstone’s lighting was splendid in its settings not just of the times of days but the moods as well.

In a press release Wednesday, DTC announced that it will postpone its show Trouble in Mind for its next season. Originally scheduled for May 26 through June 19, the show will now be included in the DTC 2022-2023 season.

“Like many organizations, the pandemic has stretched the capacity of our staff and our resources,” Jeff Woodward, managing director of DTC said in the releaser. “After much discussion with staff leadership, we felt it was best for our company to postpone Trouble in Mind to next season. We think this is an extraordinary play that is now having a new life after its successful Broadway run this season and very much look forward to sharing this play with our audience.”

Trouble in Mind by Alice Childress is an American comedy/drama, both written and set in the mid-1950s. It tells the story of Wiletta Mayer, an African American actress cast in a supposedly “progressive” play about racism written by a white male author–which turns out to be anything but progressive.

Along with its current run of Our Town, DTC’s remaining productions – The Sound of Music and The Odyssey (by DTC’s Public Works) will finish the season out.

The Classics Theatre Project announces 2022 season, brings Terry Martin back to the stage

The CTP announced its new 2022 season that work with the company’s mission “to bring the classics to audiences in accessible and relevant ways.” The company’s season runs from March-November. This season includes three productions performed at the Margo Jones Theatre in Fair Park and another in Addison, “that will see the return to the stage of a patriarch of Dallas theatre, Terry Martin, as one of the most famous patriarchs in drama, Big Daddy, in Tennessee Williams’ Cat on a Hot Tin Roof. Martin was the former artistic director of Watertower Theatre.

March 18-April 9: Look Back in Anger by John Osborne looks at 20–30-year-olds of England, who did not participate in World War II and who found its aftermath lacking in promise centering on the show’s protagonist Jimmy Porter.

May 20-June 11: Sex, Guns and Vodka by Anton Chekhov. This  farcical, Russian retelling of Don Juan as a tale of a new to town married schoolmaster and the bored provincial women who vie for his affection.

Aug. 26-Sept. 11: Cat on a Hot Tin Roof by Tennessee Williams. The story unfolds on a night in the Mississippi Delta, as the Pollitt family gathers to celebrate the birthday of its aging and ailing patriarch, Big Daddy. His two sons vie for an inheritance with former football hero, Brick, also contending with his wife’s, Maggie-the-Cat’s, unbridled sexuality and the nature of his own, in a relationship burdened by repressed love.

Nov. 11-26: Dutchman by Amiri Baraka. Written under his birth name, LeRoi Jones, the two-actor play happens all on a New York City subway car, that begins flirtatiously between a young, middle-class, Black man and a white woman, who approaches him. 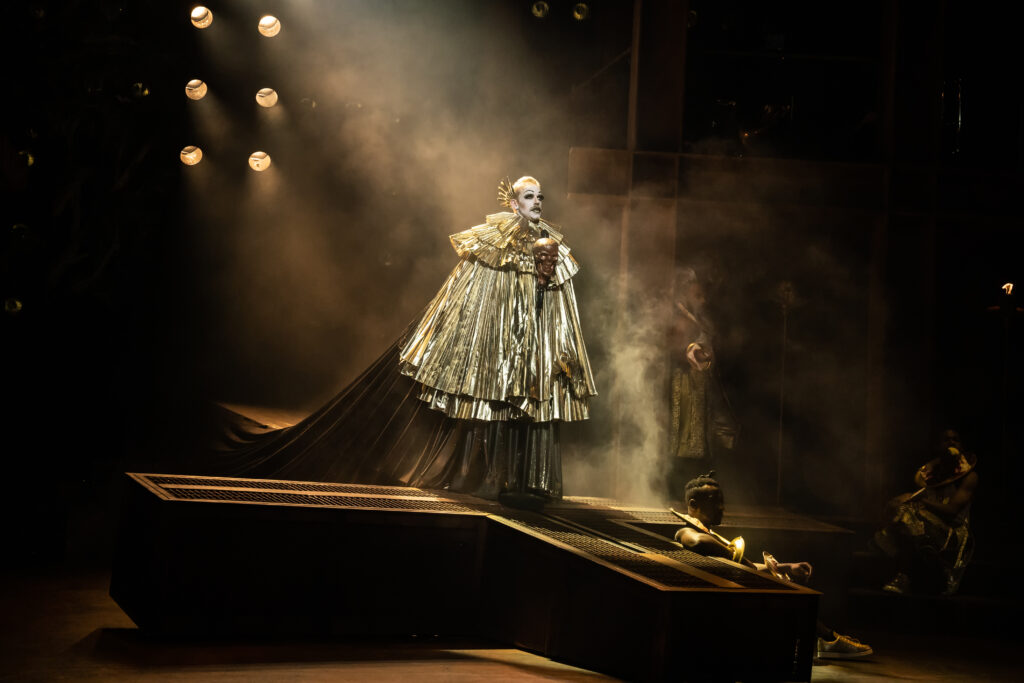 Dallas Summer Musicals announced that tickets for the 50th anniversary tour of Jesus Christ Superstar will go on sale Friday at 10 a.m. The show is part of DSM’s Germania Insurance Broadway Series and runs April 5-17.

Single tickets start at $30 (pricing subject to change) and are on sale now at DallasSummerMusicals.org or by phone at 800-982-2787. Group tickets are available as well by phone.

Aaron LaVigne leads the show as Jesus, joined by Jenna Rubaii as Mary. Omar Lopez-Cepero joins the cast as Judas. The tour also features Alvin Crawford as Caiphas, Tommy Sherlock as Pilate, and Tyce Green as Annas. Pepe Nufrio returns to the tour as the standby for Jesus and Judas.  With lyrics and music by Tim Rice and Andrew Lloyd Webber, the North American tour is helmed by director Timothy Sheader with choreographer Drew McOnie.

Cirque du Soleil’s production OVO opens in Frisco Feb. 16 and runs through Feb. 20 at the Comerica Center. CDS announced a Valentine’s Day romance package for two. Guests can purchase two tickets for the opening night performance for $79. Click here for the special and use the promo code VDAY22.

MainStage Irving-Las Colinas has announced the dates and the cast of its upcoming production of Ken Ludwig’s play.

Of the swashbuckling adventure, director Andi Allen said, “I’ve been a fan of the legend of Robin Hood in all its past TV and film versions since I was a child. And I love a good sword fight. Every time I’ve had the chance to be in a sword fight onstage, I felt like Robin Hood.”

Actor Carlos Brumfield will play the hero. He mentioned, “Robin Hood is one of those characters that is well known cross-generationally and with this production we get to dive into the nostalgia of it all as adults but also enjoy the story with younger generations.”

The family-friendly show will run March 11-26 in the Dupree Theater at the Irving Arts Center. Tickets are on sale now at IrvingArtsCenter.com.

The United States Army Field Band and Soldiers’ Chorus will present a free concert at Bass Hall March 8. Tickets are free, but reservations are required.

The band presents America the Beautiful, a “musical and visual journey across the country. We honor the veterans of every generation who answered the call to defend this great land, and recognize the soldiers standing guard today in more than 140 countries around the world.”

Reservations can be made here.

Weather and power haven’t been kind to Stage West’s newest production On the Exhale. The show’s weekend shows last week were  canceled due to a power outage. The theater had already canceled performances earlier in the week due to weather conditions.

The play will now have its previews on today and Friday, with opening on Saturday.

We will add three more performances: Feb. 26 at 2:30 and 7:30, and Feb 27 at 2:30, with Feb 27 being the closing performance. We sincerely regret this inconvenience. All current ticket holders will be contacted by box office in order to reschedule ASAP.

The CAC announced its first special guest in December for their 2021-2022 Front & Center Speaker Series, a topical speaker series with an annual theme focusing on significant national and global discourse. This year’s programming was to kick off with chef and motivational speaker, Carla Hall on Feb. 6. The center announced Thursday (what?) that the Top Chef alum will be rescheduled to March 20. All tickets purchased for the previously scheduled date have been automatically moved to the new date. Tickets are still available for the event by clicking here.

The Eisemann Center announced two new concerts for this spring. The vocal group Barricade Boys from London’s West End will perform April 9. Following up will be The Music of Billy Joel and Elton John featuring Tony and Grammy nominee Michael Cavanaugh.

Michael [Cavanaugh] scored his big break when Billy Joel handpicked him for the lead in Broadway’s smash hit Movin’ Out. In this one-night-only concert, he will lead his band through the biggest hits by Billy Joel and Elton John.

Tickets are on sale now here.

Stage West: On the Exhale, Thursday-Feb. 27. 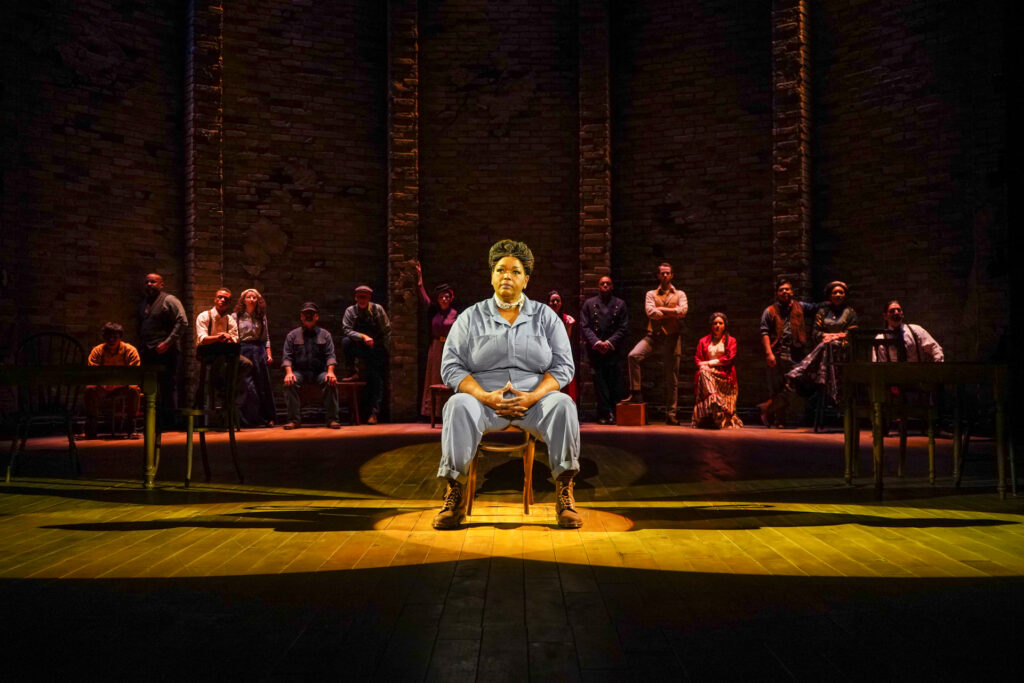 Arts Center Theatre: Breaking Up Is Hard to Do: The Musical, through Feb. 20, Plano.

Theatre Three: Maytag Virgin, Saturday through Feb. 20 in the Bryant Hall at the Kalita Humphreys.

The Core Theater: It Happened One Night, through Feb. 20.