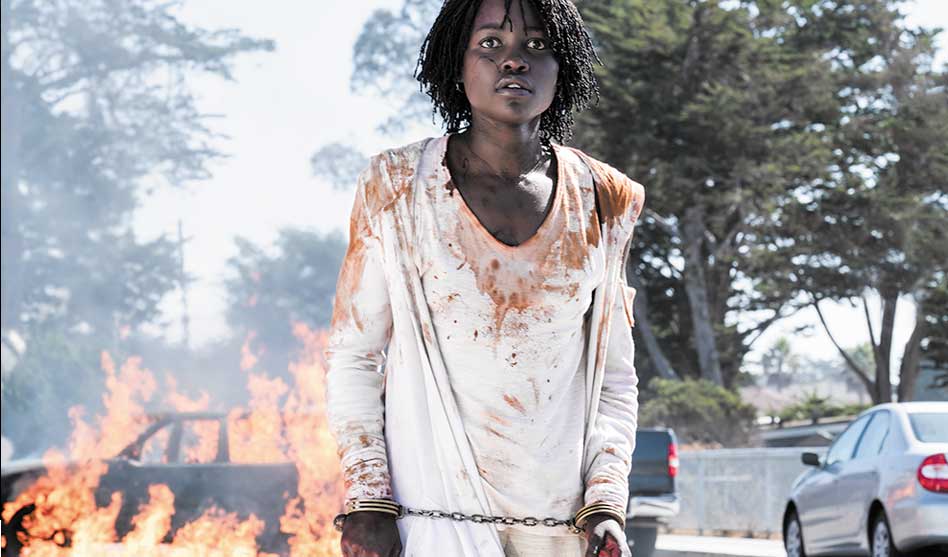 Lupita Nyong’o plays a desperate mother in ‘Us.’

Jordan Peele doesn’t capture lightning in a bottle with ‘Us’

Part of the inventiveness of Jordan Peele’s last film, Get Out, was how it took the general premise of a classic horror film (The Stepford Wives) and re-cast it as a contemporary rumination on race in America. At its heart, Get Out wasn’t even a horror film, but a sick comedy.

For his follow-up, Us — which debuted earlier this month at the SXSW Film Festival — he has added substantially to his lineup of inspirations. You won’t need to strain hard to catch intentional references to The Birds, Jaws, The Strangers, Straw Dogs, Dead Ringer, Beneath the Planet of the Apes, The Purge, C.H.U.D., The Lady from Shanghai, Bird Box, The Shining, The Walking Dead … did I miss any? Probably … which is the main problem with Us. 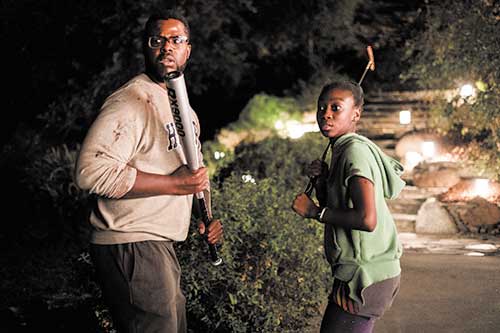 Winston Duke and Shahadi Wright Josephs are two of the bright spots in ‘Us.’

Peele has moved from a slickly efficient thriller to a convoluted, if often scary, portmanteau of ideas — too many ideas, as it turns out, to weave a coherent narrative. By incorporating so many homages, he’s muddied his story to the point where you feel overwhelmed. It’s difficult to remain viscerally scared when the filmmaker is distracting you with so much detritus.

The story begins in 1986, when young Addy gets lost in an amusement park and encounters her Doppelganger — a (perhaps) evil twin who scares the bejeebus out of her. Three decades later, the adult Adelaide (Lupita Nyong’o) is a happily-married mother of two, on vacation with hubbie Gabe (Winston Duke), daughter Zora (Shahadi Wright Joseph) and son Jason (Evan Alex). When they visit the same boardwalk where Addy was frightened 30 years earlier, she has flashbacks and suspects something sinister is afoot, and bam! Moments later her prophecy is fulfilled: Their summer home is beset by four terrifying strangers, each of whom look exactly like her family. They are the shadow people, the Tethered Ones — underground dwellers who are seemingly soulless facsimiles of their above-ground counterparts.

“We are Americans,” Shadow Adelaide (identified as Red) croaks, which seems to set up Peele’s subversive message: America is two nations, of haves and have-nots. And the have-nots want their turn.

If it stuck to this conceit, Us could be as sleekly unsettling as Get Out, but it continually raises more questions than it answers: Why don’t the shadows kill their twins outright? Where did they come from? What is their plan? If they are, in fact, tethered — the mirrors of their happier counterparts — then how did they break free? There are gestures to explain these ideas, but they simply pile on. Peele has chosen so much source material to explore, he’s also saddled the audience with all those sad tropes.

There are, nonetheless, reasons to recommend it: The face of Shadow Zora will haunt my dreams for weeks, and Duke’s lighthearted schlubby dad injects wonderful elements of humor. And Peele does have something to say beyond the gimmickry. But he also suffers from the sophomore jinx faced by some filmmakers trying to capture lightning in a bottle twice. We have seen the enemy of acclaim, and it is Us.