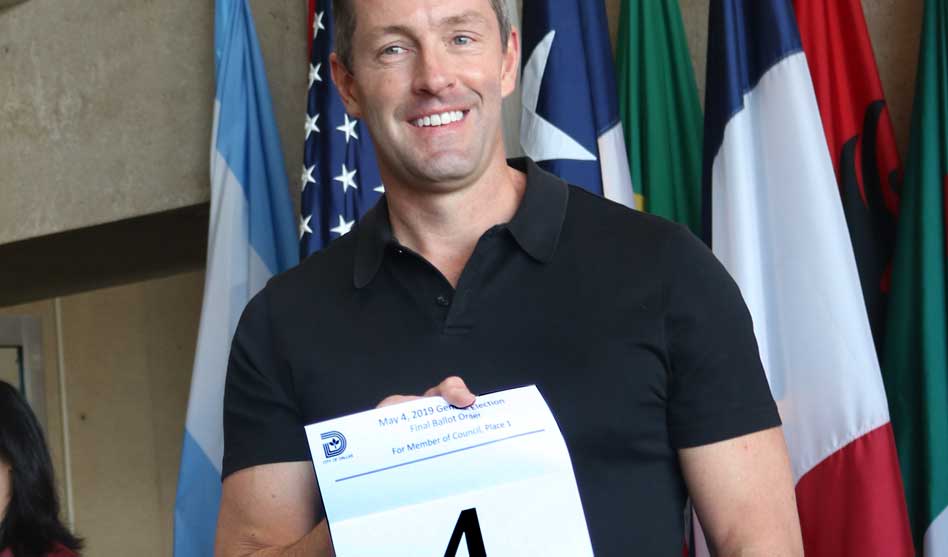 After serving on commissions, boards and community organizations, Chad West would like to sit in the horseshoe

Dallas City Council District 1 candidate Chad West decided to run for political office about four years ago and prepared himself by working with community organizations, non-profits and on city boards.

District 1 covers North Oak Cliff, roughly from I-30 to Illinois Avenue and I-35W to Westmoreland Street.

West served on the Citizens Bonds Task Force, which recommended how bond funds should be allocated, and he advocated for keeping quite a bit of the funds in parks and trails.

Before that, he served on the Bond Campaign Committee, a job he described as going into the community to sell it.

West also served on the Permit and License Appeal Board.

Most recently, West has been a member of the City Plan Commission. Serving on the Park Board is much easier because everyone loves parks, he said. But the Plan Commission? “I’m the guy, no matter what I do, someone’s going to get mad at me,” he said.

West joined the Plan Commission after an historic building near Bishop Arts was torn down and replaced with a CVS. He said his approach on the commission has been to keep things more neighborhood-friendly, and that he prefers to have developers get input from the neighborhood before presenting a plan.

One of West’s first forays into neighborhood activities in Oak Cliff started 10 years ago when he and his partner, Brian Bleeker, started Dash for the Beads, a Mardi Gras-themed 5K run that has since raised more than $300,000 for Oak Cliff schools.

As an attorney, West served on the board of Lambda Legal and helped turn the Lawrence v. Texas Dinner into the highly successful Landmark Dinner, which has become that organization’s premier fundraiser.

As a candidate, West’s campaign mantra has been “Neighborhoods First,” not surprising for a candidate that wants to be successful in an area with some of the city’s strongest neighborhoods and the largest concentration of active neighborhood associations.

“I want to protect neighborhoods above and beyond all else,” he said.

West said he favors long-term zoning that will protect single-family neighborhoods. That doesn’t mean he’s against development or against adding multi-family housing in certain areas, especially transit areas. He used Westmoreland Station, the Oak Cliff terminus of DART’s Red Line, as an example.

Acres of old and deteriorating industrial buildings surrounded by single-family neighborhoods cluster on one side of the Westmoreland Station. He’d like to see that industrial land redeveloped into denser housing and retail closer to the station that stair-steps down to new single-family housing adjoining current neighborhoods.

West’s other issues are related.

“We have to address the affordable housing crisis in Dallas,” he said, explaining that candidates across the city are campaigning on that issue because it’s hurting every district in Dallas. To address it, he’d like to put together a comprehensive housing plan.

He’d also like to require agencies to work together when it comes to road repair. “Don’t pave then dig,” he said, noting that often, the city will resurface a street, and, just weeks later, a utility will dig up the newly-paved road for underground maintenance. All the money spent on the street repairs ends up wasted, and the utility never returns the street to its previous condition, West said.

“Curb bump-outs, bike lanes, sewers, utilities — do it all at once,” he said.

West also explained the city has about 1,500 lots of land. He’d like to see a community trust set up to build affordable homes sold at a major discount to police, firefighters and teachers. In exchange for the discount, he’d limit the annual increase that can be added if the house is sold to prevent flipping.

As for LGBT-certified businesses, he’d like to add them to the category of approved minority vendors.

West was born in Paducah, Ky. He’s an army combat veteran, and that’s how he ended up in Texas some 20 years ago.

He said if elected to the city council, he would serve on the council full-time while allowing staff in his law firm to continue operating successfully without him there.

West and Bleeker have been together for 10 years, and they have two children: Victoria, who is three-and-a-half years old, and Preston, who’s about to turn two. Because the children were born via surrogate in California, both West and Bleeker are named as parents on the birth certificates.