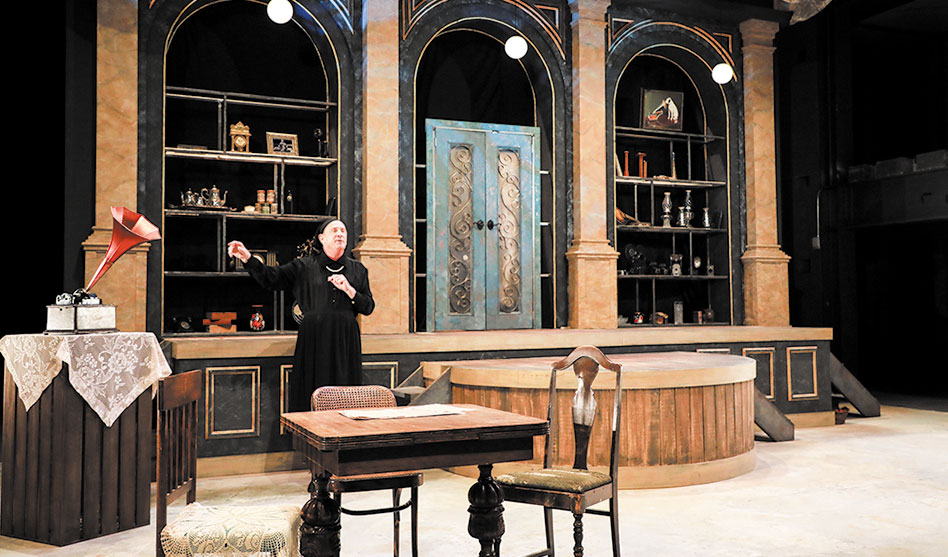 Bob Hess plays 37 characters in ‘I Am My Own Wife,’ among them an East German trans woman who may have been a Soviet spy. (Photo courtesy Jason Anderson)

‘I Am My Own Wife’ brilliantly brings theater back to North Texas, albeit it remotely

There’s a trope of literature — or maybe it’s just dime-store psychology — that says we are all the hero of our own life story. How could it be otherwise? We don’t, by and large, tent our fingers with an evil laugh while blotting out the sun like some ghoulish Mr. Burns, or lock brown children in cages apart from their parents like you-know-who. If we didn’t buy our own press, how could we live with ourselves?

At its heart, that’s the aching takeaway from writer Doug Wright’s I Am My Own Wife. The putative hero of the play is Charlotte von Mahlsdorf, a transgender antiquarian who saves artifacts and lives, after surviving the Nazi regime, by apparently cooperating with the Soviet secret police. How much she cooperated is a matter of some dispute, and the play — which, despite being a solo show performed in this incarnation by Bob Hess, is populated with three dozen characters, with four primary ones, including the playwright himself — wrestles stealthily and discretely with what to believe.

Charlotte is the epitome of the “unreliable narrator;” it’s embedded in her bones. She began life as a boy, then changed her name and identity as a woman, carved out a career as a preservationist of late-19th-century gewgaws, served as den mother to an underground community of homosexuals… and either fulfilled the wishes of her dearest friend or betrayed him. Which is true? What is truth to Charlotte, anyway? I Am My Own Wife wallows in its metaphysical mysteries, charming us as an audience as Charlotte seems to have charmed the Stasi (and Wright, who sold his car to finance his interviews with her). Do we want to believe her because we have so much invested in her being right? Can the good that someone does outweigh a concomitant dose of evil? And who is there to judge it?

If this also sounds heady, even prickly, it’s not. The play is dense with details, but they flow like cool mountain water over us. All the evidence of who Charlotte was sits on those shelves in front of us; she has written her memoir in the attention she has paid to her life’s work… and that work is as much survival as anything.

Horror, humor, hubris — it’s all entrusted to Hess, whose vocal gymnastics are just shy of miraculous. He enters hissing Charlotte’s wheezy, Teutonic broken English, then drops into a gutteral drawl as a Texan, a boyish pattern as Wright, a heavy drone as Alfred. It’s a complex role, so much more demanding than just portraying Charlotte herself. Indeed, the genius of the decision to make I Am My Own Wife a solo piece — its structure is mostly as a traditional play, and could have easily have sustained several additional actors — is precisely to keep the audience in the head of all the characters at once. What creates more ambivalence than the accuser and the accused in one body? Hess holds our attention for the full two hours, and he does so alone in a theater, sans audience (it was recorded and prepared for broadcast in deference to the pandemic), yet fully committed to its theatricality. It’s a delight to have an authentic return to theater as good as this one.

I Am My Own Wife streams on Vimeo through Aug. 2. Use the code CHARLOTTE for a 50 percent discount. WaterTowerTheatre.org.