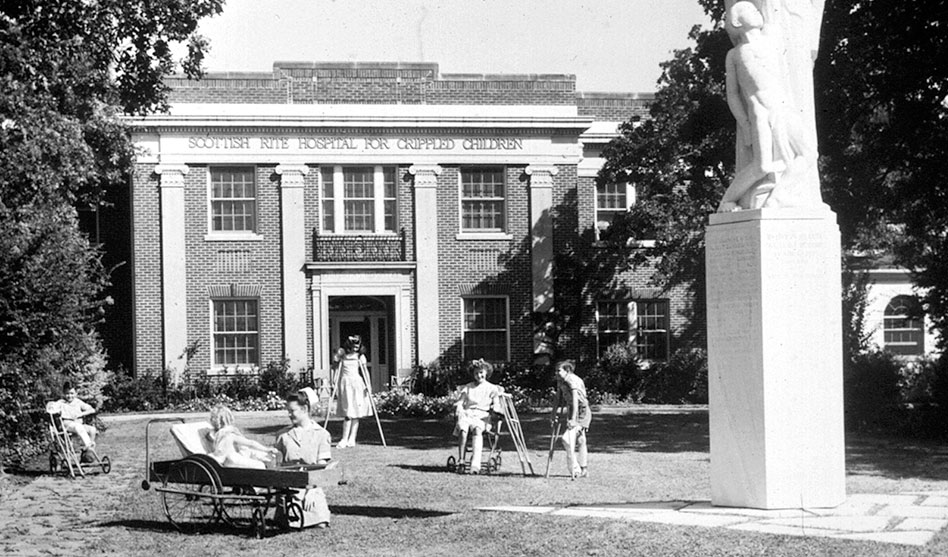 Scottish Rite for Children, located on the corner of Maple and Oak Lawn avenues, celebrated its 100th anniversary earlier this month. The hospital began as a one-room clinic run by Dr. William Beall Carrell, who returned from service treating battlefield injuries during World War I.

Here at home, the polio epidemic was spreading.

Carrell’s original eight-bed clinic was on Junius Street in East Dallas. In 1921, the clinic expanded to a hospital that stood on three acres on the corner of Oak Lawn and Maple. Called Scottish Rite Hospital for Crippled Children, the site was chosen because it was across the street from old Parkland Hospital. Two other hospitals for children — Easter Seals and Hope Cottage — as well as other medical facilities also were located on the 15 acres that now belong to Scottish Rite. 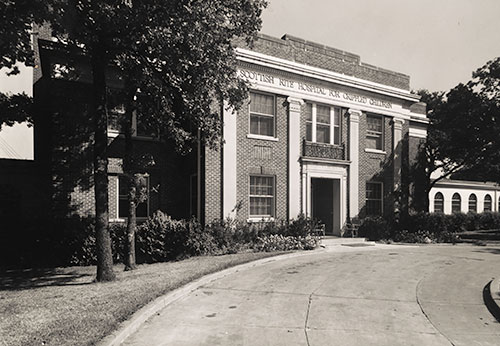 While Parkland was outside Dallas city limits when it first opened, Scottish Rite was inside the city when it purchased its property two decades later. Between Parkland’s founding in 1898 and Scottish Rite’s in 1921, Dallas had annexed Oak Lawn, and landmarks like Reverchon Park and Turtle Creek Park opened, expanding the city beyond Lemmon Avenue.

The hospital name comes from its founders, who already had a building downtown on Harwood Street that still stands. Scottish Rite is a branch of freemasonry. The masons who founded the hospital chose architecture that matched Parkland’s across the street.

In the early 1950s, Parkland moved to Harry Hines Boulevard. Two children’s hospitals merged to become what is known today as Children’s Health and moved near Parkland. And Hope Cottage moved to Fitzhugh Avenue.

But Scottish Rite decided to stay on Oak Lawn Avenue and acquired the property the other medical facilities left behind.

After Parkland moved, Dallas County used its abandoned buildings mostly to the detriment of the neighborhood. Across the street from the orthopedic hospital for children, old Parkland became a halfway house, increasing crime in the neighborhood, and behind Scottish Rite was a deteriorating, crime-ridden Reverchon Park. 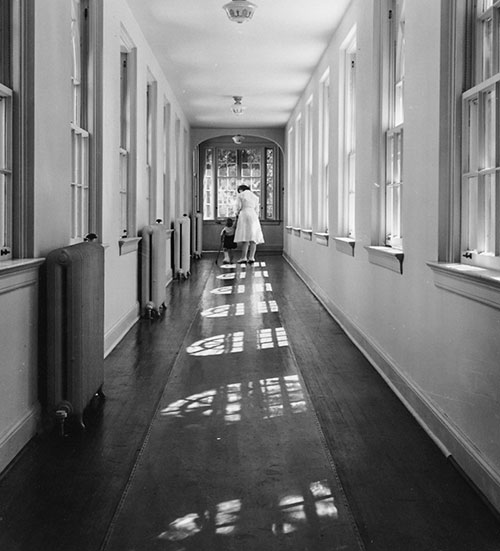 Then during the 1980s and into the ’90s, Scottish Rite worked with neighborhood groups like the Oak Lawn Committee to convince the county to move the halfway house away from the children’s hospital and to clean up Reverchon Park. That clean-up originally just involved clearing trash out of the park; it wasn’t until the Katy Trail came through the area that Reverchon became safe, and the neighborhood returned to use its facilities.

Scottish Rite welcomed Katy Trail users into Reverchon by helping add the walkway from the trail into the park.

When the hospital opened a century ago, the “crippled” children Scottish Rite served were mostly children recovering from polio. After the introduction of the first polio vaccine in the early 1950s, that disease was eradicated and the hospital’s focus shifted to other orthopedic disorders, like scoliosis. Sports-related injuries rank second. The hospital also specializes in replacement limbs for children. Clever engineering of these orthopedic devices allows a leg to “grow” to match the growth of the natural limb.

But another of Scottish Rite’s specialties is treating children with learning disabilities. The term “dyslexia” was coined at the hospital in 1968, and that condition has been treated here longer than it has anywhere else. 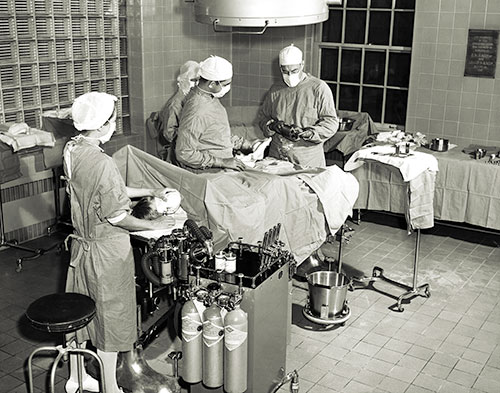 The current hospital building was built behind the original building, and it opened in 1977. That original building was torn down, and a park and playground stand there now. The new building is six levels — two are below ground to keep the size of the building from appearing too imposing to children.
Peggy Meyer, director of Community Relations, said the park and playground are open to the public and that the facilities are designed for children of all abilities.

Just as the focus of what Scottish Rite treats has shifted, how the building is used has also changed. Two floors of the current building were originally patient rooms. Now only one floor houses patients, because so many of the children who come here are now treated on an out-patient basis.

For example, scoliosis surgery used to require children to stay in the hospital for several nights. Now laparoscopic surgery means a child can arrive in the morning and leave by that evening. When I took my tour, only about 10 children were in-patients.

Meyer said many in-patients are children who are at the hospital from out-of-town and might need to be seen by a doctor in the morning before going home. She said sometimes a child who’s homeless will be kept at the hospital a few days because they really had nowhere to go to recover.

For those staying at the hospital, DISD has a fully-equipped classroom on the second floor staffed by a full-time teacher.

Scottish Rite’s 15 acres of land serve as a gateway to Oak Lawn and welcome the community to be part of the hospital family. “There are so many volunteer opportunities,” Meyer said. Most of the volunteering went away during the pandemic, she noted, adding, “But we’re starting to welcome our volunteers back.”

Among those opportunities is selling popcorn to visitors. That’s actually a highlight of the hospital. When you enter, there’s no hospital smell. Instead, the much-more-child-friendly aroma of hot-buttered popcorn fills the air.

Meyer said anyone who is interested in scheduling a tour of Scottish Rite or booking a speaker to share Scottish Rite’s story, and anyone thinking about volunteering or making a gift to the institution should contact Stephanie Brigger at stephanie.brigger@tsrh.org or 214- 559-8374.

Oh, those contributions … Scottish Rite is in the middle of a $100 million capital campaign. They’re halfway to their goal. And who does that money serve? Since 1921, almost 325,000 children have been treated at Scottish Rite. Although the hospital does take insurance, one thing that hasn’t changed over the last century — no one is turned away because of ability to pay.

In 1994, Bill and Hillary Clinton visited Scottish Rite, and Bill Clinton gave his weekly radio address from the hospital.

“This morning I’m speaking to you from Dallas, Texas…and from the Scottish Rite for Children, one of the finest pediatric medical centers in America,” Clinton said. “Places like Scottish Rite don’t ask children with severe disabilities or serious illnesses, ‘Can you pay?’ They just ask, ‘How can I help?’”

So what’s sustained the hospital for the last century? “The generosity of many, many people over many, many years,” Meyer said.

For more photos and information about the history of Scottish Rite for Children visit ScottishRite100.org.