A seasonal cycle of Van Gogh 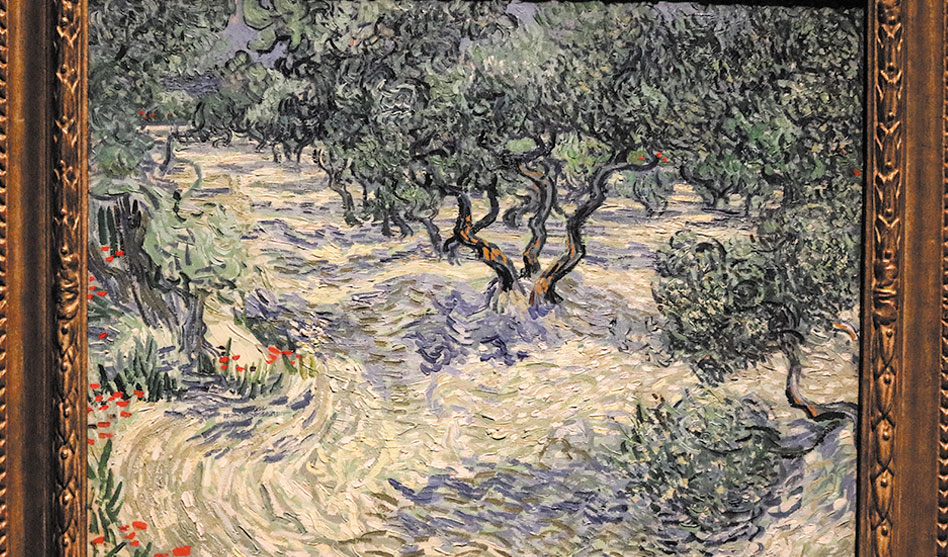 The Dallas Museum of Art’s current blockbuster exhibition, Van Gogh and the Olive Groves, has been 10 years in the making. Now visitors to the DMA have through Feb. 22 to see this first-time exhibit.

When Nicole Myers, the DMA’s current curator of European Art, took a trip to Amsterdam hoping to arrange a loan from the Van Gogh Museum, she learned the artist’s series of olive grove paintings from 1889 had never been exhibited together. During her years of study of the paintings, Myers had learned that Van Gogh considered this group of 15 paintings among his finest work. In letters to his brother Theo, the artist explained that some of the paintings pushed the limits of what he was already doing.

Suffering from depression in 1889, Van Gogh checked into an asylum at Saint-Remy-de-Provence, about 15 miles from his home in Arles. For the first month he wasn’t allowed to leave the grounds, but later during his stay, he was able to walk out to the surrounding olive groves. 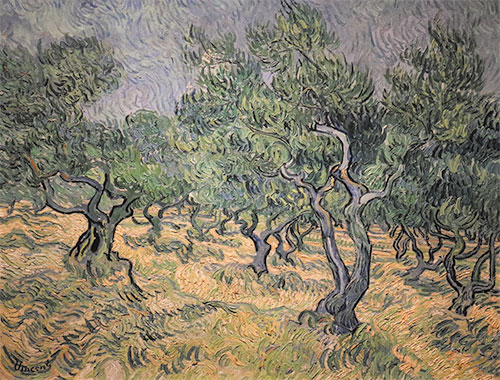 Several of the smaller canvasses in this exhibit were likely painted in the groves. Larger ones may have been painted from memory in his studio at the hospital.

What Myers has put together is a seasonal cycle of paintings of the olive groves. In an unusual use of the space in the museum, the gallery is in the round, with paintings arranged chronologically in a annual cycle.

Van Gogh’s use of color to depict the change of seasons is partially from his imagination. Olive trees are evergreen. But the shadows cast by and colors of a particular mountain in the background, as well as his swirling skies, add to the beauty of this cycle of paintings.

Among the things learned during the study of these paintings is that Van Gogh wrote about the violet shadows cast by the olive trees. But none of the 15 olive grove canvasses had violet paint. 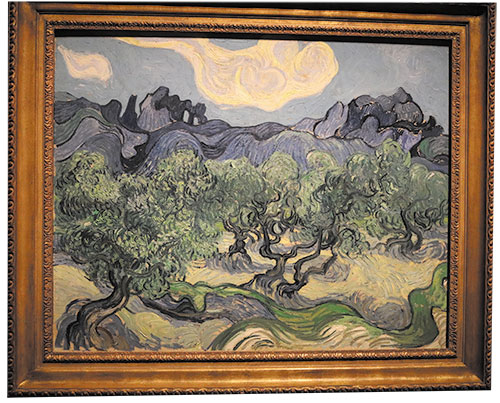 Light, Myers learned, had affected the color we see in the artist’s paintings today. The violet paint he used was among the most unstable of his oils. As bright and colorful as his works remain, originally, they were even more vibrant.

In addition to Van Gogh’s work, the exhibit includes a painting by Paul Gauguin referring to the traditional Christ among the olive groves. Van Gogh’s portrayal of olive trees without the religious connotation was a first, although Van Gogh believed his depiction of the landscape was also spiritual.

During his stay at the asylum, Van Gogh continued to paint, except for one six-week gap in the summer during which he suffered a severe bout of depression. He returned to his easel, though, to beautifully depict the fall. 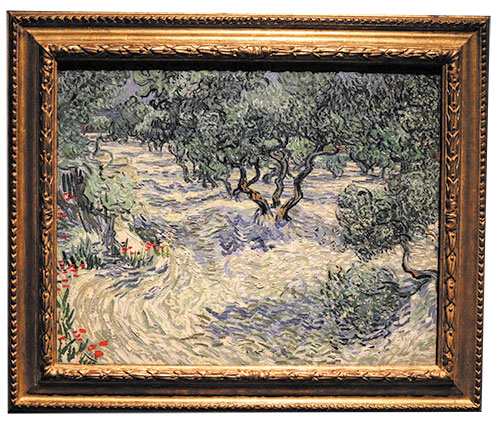 Van Gogh painted more than just the olive groves during his hospitalization. During his stay, he produced what would become one of his most famous works: The Starry Night. The cypress tree that is seen in shadow in the painting features prominently in one of the olive grove paintings in the DMA show.

As winter approached, Van Gogh believed he wasn’t finished painting the landscape in Saint-Remy-de-Provence. But he decided to leave, because his depression returned late in the year.

He was 37 when he committed suicide the next summer.

During the 10 years he painted, Van Gogh produced about 860 oil paintings. The largest collection of those canvasses is at the Van Gogh Museum in Amsterdam, which is this exhibit’s next stop.

If you’ve attended one of the interactive Van Gogh shows currently playing in Dallas and in Arlington, head over to the DMA and see how the artist’s canvasses swirl and twirl even without the use of video projection. Stare at an actual Van Gogh canvas, and you’ll see what inspired the touring immersive shows.

At the same time the DMA opened its Van Gogh exhibit, the Kimbell opened its Turner show — two modern artists exhibited in shows that couldn’t be more different (See the Oct. 15 issue of Dallas Voice for a story on the Turner exhibit at the Kimbell.) The Turner show is encyclopedic, with more than 100 works spanning the long life of the artist. The DMA show, in contrast, is laser-focused on one year in Van Gogh’s life.

The Turner exhibit shows various periods of the artist’s work and how he developed into the world’s first modern artist, whereas the Van Gogh exhibit chooses select pieces from the body of work produced in one year, depicting how the artist concentrated on and developed one theme.

The common thread, though, is that both artists were revolutionary and painted in ways previous artists never had. So having both exhibits available at once can give the viewer a unique view of the artistic process in its various forms.