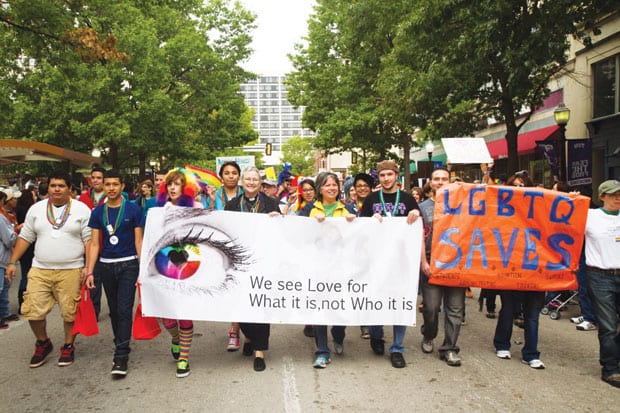 Group started to help Fort Worth-area youth celebrates 3 years of giving teens a safe and fun place to be themselves, find acceptance 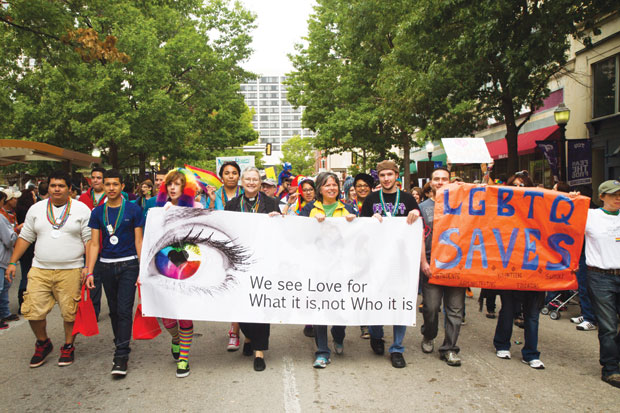 WALKING THE WALK | Members of LGBT S.A.V.E.S. march in the Tarrant County Pride Parade on Oct. 5, 2013. This was the group’s third time to enter in the parade, but it had the largest participation this fall with 100 teens walking. (Chuck Marcelo/Dallas Voice)

ANNA WAUGH  |  News Editor
FORT WORTH — When Taysia Ortiz was outed to her mother in the seventh grade, she thought her life was over.
Her mother found a note in Ortiz’s jeans that she’d written to a girl she liked. Her mother didn’t respond well to having a gay daughter.

Now a junior at Arlington Heights High School, Ortiz said her mother has come around since her middle school days, but she fears coming out to her extended family because many of them are vocal about not liking gay people.

Ortiz has recently found groups to help her talk about being who she is. She joined the Gay-Straight Alliance at her school and has been attending events put on by the local community group LGBTQ Students, Administrators, Volunteers, Educators, Support, or LGBTQ S.A.V.E.S.

The group, which will celebrate its three-year anniversary this month, started to help LGBTQ youth in Fort Worth and beyond since the area doesn’t have any LGBT youth programs, like Youth First in Dallas or GALA Youth in Collin County.  Events like end-of-the-year barbecues and winter proms have now grown into more regular events sponsored by local churches and area venues that allow the group to use the space for free.

Sharon Herrera, who’s openly gay, started LGBTQ S.A.V.E.S. in 2010 after the rash of LGBT teen suicides. Herrera works at Fort Worth Independent School District and knew there were queer teens who needed a place outside of GSAs to get to know each other, and she wanted to create that outlet. 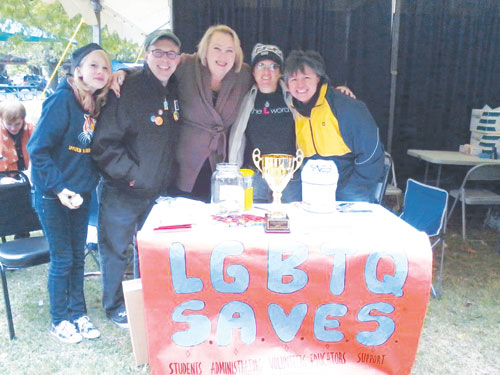 OUT AND ABOUT | Sharon Herrera, far right, is pictured with LGBT S.A.V.E.S. members at Fort Worth’s Pride picnic last year. She started the group to help offer a safe place for youth. (Photo courtesy of Herrera)

“Working for a school district, I know we have LGBTQ youth, and they need a place,” she said. “I wanted something for them here, so they can have fun and get to know other kids in the school district and build their support and so they know they’re not alone.”

A personal mission
At 16, Herrera attempted suicide, but her aunt came in and stopped her. Her aunt kept Herrera’s sexuality a secret until she was comfortable coming out later at 20. Growing up in a conservative Catholic home in Texas, she thought no one would accept her, and she feared being bullied at school if kids thought she was gay.

She wanted a group to help other kids who felt alone find a community of people they could trust.

“I know I didn’t want anyone to feel like I did back then,” Herrera said.

Around the same time three years ago, Marvin Vann, a teacher at Southwest High School and co-sponsor of its GSA, started doing research online about bullying and contacted the school district for someone to help with GLSEN training for LGBTQ youth.

He was directed to Herrera, and they later met with a handful of others on Herrera’s porch. And LGBT S.A.V.E.S. was born.
Vann said the events provide a comfortable, safe place for youth to have fun and be themselves without fear of judgment.

“It means a great deal to them just to be comfortable in their own skin,” he said. “To just not have to worry about sticking out as different means the world to them.”

A student at a previous school where Vann taught attempted suicide outside his classroom. The student was later sent to live with family out of state, and Vann said he’s doing well now.

At the time, Vann was the only out teacher. He often thought if there’d been something like LGBTQ S.A.V.E.S., the kid wouldn’t have harmed himself. That school now has a GSA, but the experience affected Vann greatly and makes him want to save other students before they become too isolated and desperate.

“That’s pretty much why I do this,” he said.

For Ortiz, the events help show her friends and family who she is and how she can lead a normal, happy life being gay.

“These events actually help me show who I am. Our parents can see who we are and what we want to be,” she said. “They just show that there’s gay people out there. That it’s not just us.”

‘It actually saves those kids’
For others, Ortiz said the openness at the events, like bringing a same-sex partner to an LGBT S.A.V.E.S. prom, helps them know they aren’t alone. Other young people who desperately seek acceptance find refuge in the group.

“I think it’s important to have these events and show people that being gay doesn’t mean you have to hide,” Ortiz said. “It actually saves those kids who are gay when they tell their parents because it shows there are people who care for the gays and support the gays.”

That sentiment rings true for Maliek Berryman, a senior at Southwest High School.

Berryman came out to his mother in seventh grade. While she still has trouble accepting him for being gay, he said he’s also still coming out to his other family members.

He discovered LGBTQ S.A.V.E.S. two years ago after he started attending Southwest. The schools he’d previously attended didn’t have GSAs, but when a friend invited him to a meeting, he agreed to go. He’s now the GSA president.

The club also got involved in S.A.V.E.S. events. He said the groups have helped him gain courage and confidence in himself.

And when his mother gets angry with him about his involvement in the GSA or something gay-related he’s written on Facebook, he said he can always find support from the friends he’s made through LGBTQ S.A.V.E.S., who often feel more like family to him than his own.

“The group is my family,” he said. “It’s always one of them I go to when I can’t feel the support from my actual family. I know I have another family to turn to.”

The group also helps allies. Like Savannah Winters, a junior at Chisholm Trail High School, who started the first-ever GSA in the Eagle Mountain-Saginaw Independent School District this fall.

Winters said her best friend is lesbian, and her friend’s girlfriend had tried and failed to start a GSA before. Teachers worried how students and parents would react to the club on campus and thought kids would be targeted if they joined.

But Winters overcame the doubts and proved that, by law, the administration had to let them have the GSA. And despite parents not wanting their kids to be involved in the club it, still has seven members.

Winters has been involved in LGBT S.A.V.E.S. for about a year. She said she likes going to events as an ally because she often gets judged for supporting LGBT people, but no one judges at the group’s events.

“You get to see a whole other side of the world,” she said.

Looking ahead
Herrera said the group’s events have drawn kids from outside Fort Worth, like Crowley, Mansfield, Arlington, Keller and Frisco.

The first picnic in 2010 had about 30 teens, followed by 70 the next year. The group has marched in the Tarrant County Pride Parade the past few years and had about 100 march this year — the most in attendance ever.

Herrera expects the group’s outreach to only grow. She’d eventually like to become a nonprofit and see the creation of a resource center for LGBTQ youth in Fort Worth because she has seen the need for it. Three years ago, though,  she started with a simple thought: to help LGBTQ youth. Now she’s envisioning a resource center.

“I didn’t think this would last three years because it’s hard work,” Herrera said. “But it’s growing, so it tells me we’re doing something right.”

Having her aunt be the one person she could trust with her sexuality all those years ago gave Herrera hope, and that’s the thing she wants to give the kids in her group.

“They know they have somebody who’s a grown adult who has survived,” Herrera said. “I know it gets better. I live that and I’m paying it forward.”

LGBT S.A.V.E.S. is having a Thanksgiving dinner and a movie night Nov. 15 from 6-9 p.m. at St. Stephen Presbyterian Church, 2700 McPherson Ave., Fort Worth. For more info about the group, visitFacebook.com/lgbtqsaves.

This article appeared in the Dallas Voice print edition November 15, 2013.