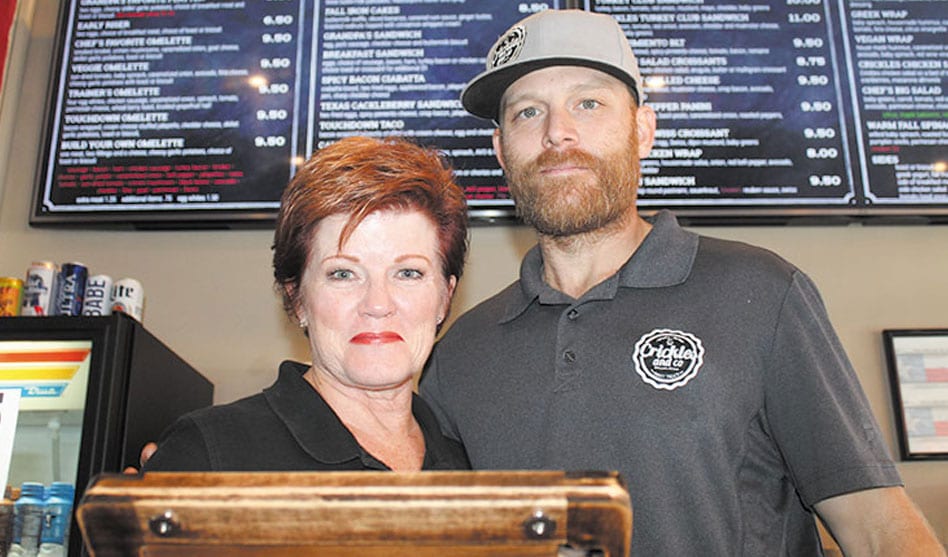 Crickles, a new breakfast, lunch and brunch restaurant, opened off Cedar Springs Road on July 25, in a space that’s been occupied by restaurants for at least two decades.

They’ve already been so successful they’re opening a second location in Lake Highlands sometime this spring. They are, co-owner Chad Bernard said, in it for the long haul.

But they’ve also gotten some odd code compliance complaints, and they’ve been reported to the Texas Alcoholic Beverage Commission for serving alcohol after hours, even though the restaurant isn’t open after hours.

Bernard, who owns the restaurant with his mother Donna, his step brother Mark and his sister Crystal, said the complaints have been merely annoyances and a time-wasting drain but nothing that threatens his business.

It all started, Bernard said, when Italia offered to let them put a sign on their rail pointing to Crickles’ entrance, two doors down on Throckmorton Street. Thairrific, which occupied the space for several years, had a similar sign hanging on Italia’s rail, and no one complained.

But suddenly the Crickles sign, smaller than Thairrific’s had been, violated city ordinance and had to be removed.

Next, Bernard said, they bought two small outdoor cafe tables with chairs, similar to tables previous restaurants in that location have placed under the awning for years. The day he placed the tables outside, code compliance showed up again and claimed the office had received a complaint.

The code compliance officer insisted the complaint had been made weeks ago. Bernard showed the receipt that proved those tables were purchased that day. But rather than contest the complaint, he removed the tables.

Then came an inspection by the fire department. The space had been “green tagged” — approved as safe — by the city, including the fire inspector, in July. This complaint concerned a fire exit, even though the Bernards had made no structural alterations to the space other than installing a take-out window in the restaurant’s bar area.

From the outside of the building, it’s apparent that corner had a door at one time. Bernard said he traced that alteration to the building to 2007. But the fire department said it had received a complaint directly from the mayor’s office, and Crickles needed a fire exit in that corner of the space.

NOTE: Dallas Voice received an email from the mayor’s office that it did not file the complaint. “Our office has no record of a complaint on this matter,” wrote Scott Goldstein, Mayor Mike Rawling’s spokesman. He reiterated in a second message, “I have checked around and have found no information to suggest the complaint came through our office.”

Finally, a TABC inspector paid Crickles a visit because someone complained the restaurant was serving alcohol after hours. Chad Bernard said he could prove, via time-stamped receipts, that didn’t happen. And anyway, Crickles closes at 10 p.m. and their liquor license allows them to sell alcohol until midnight.

The TABC inspector told them he knows they weren’t selling after hours because he’s been by late at night to find they were closed. His visit was more of a heads-up that someone’s filing false reports against them than a warning.

So the Bernards were left to wonder what’s going on. Was another restaurant filing these complaints? A bar owner or employee? Or was it someone in the neighborhood unhappy about a straight family opening a business in the gayborhood?

Straight-owned businesses have been part of the neighborhood since Union Jack, the first gay-owned business on the street, opened in 1976. Adairs was a redneck bar located across the street from Union Jack in what is now part of S4.

The owner of Adairs disliked the gay community moving in around him, but he especially hated Union Jack’s suggestive window displays. The more he complained, the more outrageous Union Jack owner Richard Longstaff made his window displays. At one point he even put scantily-clad live male models in the window. Adairs eventually moved.

When Gene Street opened the original Black-eyed Pea restaurant on Cedar Springs Road in the late 1970s, he embraced the new gay-owned shops and bars that were opening along The Strip and hired many LGBT employees. His business thrived.

Other businesses with non-LGBT ownership have come and gone. When they didn’t welcome the LGBT community with open arms, they closed quickly. Recent examples include a spin studio, a Mexican restaurant and a wine bar.

After opening, Crickles joined the North Texas GLBT Chamber of Commerce, the Cedar Springs Merchants Association and sent food over to the Nelson-Tebedo Clinic. Their staff is fully inclusive of the community.

Donna Bernard said all they want is a nice welcoming, family atmosphere. Chad Bernard said the large group of LGBT customers who regularly hang out there tells him they’re doing a good job of that. He enjoys seeing how many people come in just to talk to his mom.