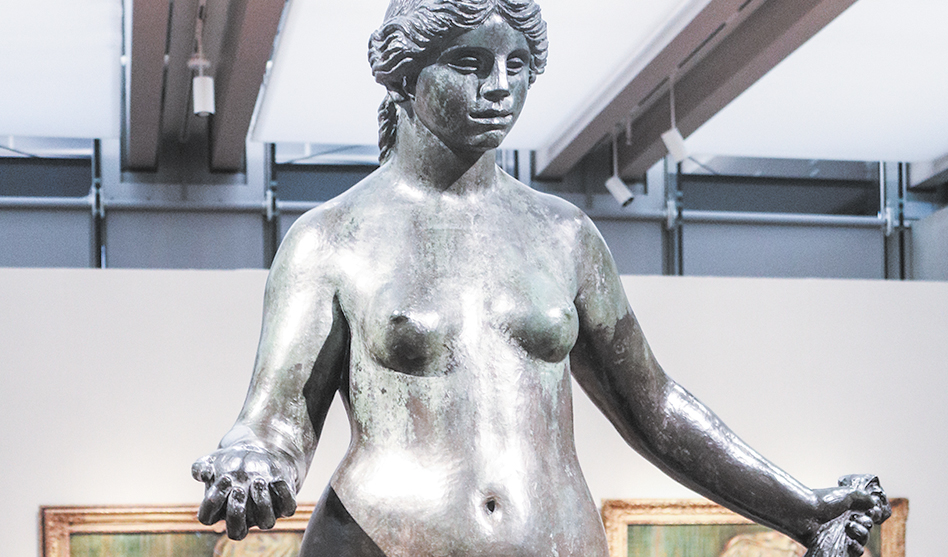 What could the Kimbell Art Museum do to follow its blockbuster Monet exhibition that drew record attendance and unprecedented new memberships? Renoir.

But this exhibit isn’t just “same genre, different artist.” This is an entirely different look at one facet of Renoir’s work.

The exhibit is entitled Renoir: The Body, The Senses. While the artist painted landscapes, cityscapes and family portraits, this exhibit focuses on the woman’s body, mostly nudes. Renoir was, Kimbell Art Museum Director Eric Lee said, “the greatest painter of the nude of his time.”

The entry gallery includes the first painting by Renoir accepted into the Salon. In the next is the only nude by the artist entered in the Impressionist exhibitions. And in the final room hangs “The Bathers,” finished in 1919, the year of Renoir’s death. George Shackelford, Kimbell deputy director and co-curator of the exhibit, called this work Renoir’s masterpiece and a “glorious last movement of a symphony.” 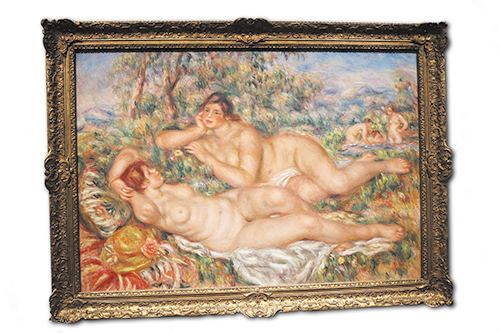 “The Bathers” also serves as an interesting contrast to the previous Monet exhibition, which focused on the last years of that artist’s life. With dimming eyesight, Monet’s canvasses got darker and more abstract. Renoir’s “The Bathers” was brighter. Shackelford describes the color as “too saturated.”

Although Renoir suffered from severe arthritis, an assistant would place a brush in his hand, and his movements came from his arm rather than his fingers to produce nude figures are that larger and well defined.
Interesting about “The Bathers” is that two nude women are lying in a field painted in a very Impressionistic style.

Three women are bathing in a pond behind them. Obviously, the scene is an exterior. But maybe not. The front nude lies on a pillow, and the woman behind her props herself up on her elbow, leaning on something that blends into the landscape.

The main women in “The Bathers” were painted on a sofa in Renoir’s studio while the exterior was from a different view or maybe from memory. But the blending of interior and exterior in one of his final, if not his last work, is a brilliant piece that I kept returning to during my visit to the collection.

While expecting comparisons between the recent Monet: The Late Years exhibit and Renoir, I kept finding contrasts. The Monet exhibit focused entirely on that artist. One Monet after another, most from collections I’d never seen before. The current Renoir exhibition puts the artist in context. His nudes are juxtaposed with similar and contrasting works by other artists.

In the opening galleries of Renoir are nudes by Corot and Reubens, artists of an earlier generation whose work influenced Renoir’s earliest paintings.

Renoir grew up in Paris blocks from the Louvre. “Diana Leaving Her Bath” by Francois Boucher, on loan from the Louvre, is a painting that, Renoir said, “was the first painting that grabbed hold of me, and I have continued to love it all my life, as one does his first love.”

Next are works by Renoir’s friends and contemporaries, such as Degas and Cezanne, hung side by side with his canvasses. Similarities and how they influenced each other are evident, as are each artist’s distinctive style.

Finally displayed are nudes by younger artists such as Matisse and Picasso who were fans of Renoir and influenced by him. One Renoir canvas, “Bather Seated in a Landscape, Called Eurydice,” was purchased by Picasso in 1920 and is included in this exhibition on loan from the Picasso Museum in Barcelona. It is one of seven Renoirs that were part of Picasso’s personal collection.

Another surprise in this exhibit are bronze sculptures by Renoir. Created with an assistant later in life when he was stricken with arthritis, he directed every stroke of the creations even if his hands weren’t directly molding the bronze.

A note about judging the beauty of the figures in Renoir’s works: While his models may have been thin, Renoir painted his own idealized vision of beauty at that time. Breasts were uniformly rounded and firm. Heads were often smaller than what might have been accurate and hips were always wide.

On the hundredth anniversary of the artist’s death, we have a vision of what beauty was a century ago and an exhibit that amazes and wows any lover of Impressionism.

While the Monet exhibit was about a lot of the Monet you wanted to see, this exhibit is about a Renoir you didn’t expect to encounter.