Reminding us of their humanity 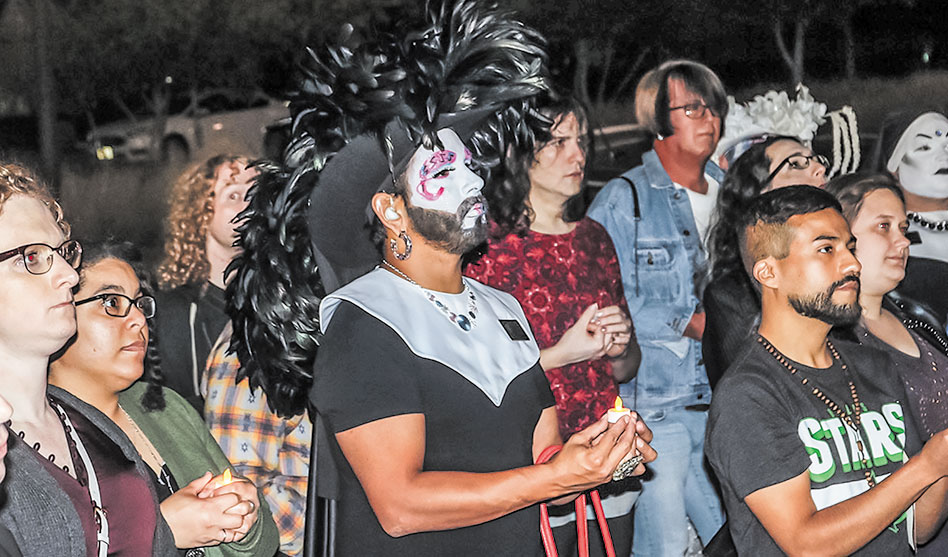 The defense attorney in the Chynal Lindsey murder trial opened his remarks in court this week by misgendering the victim. The prosecutor, however, made it clear to the jury he would use proper pronouns and that no matter how much the defense attorney would try to dehumanize Lindsey, this case is about the taking of a human life.

Using cell phone records, the prosecution showed that Lindsey and accused assailant Ruben Alvarado were in touch a number of times before Lyndsey was found murdered on June 1, 2019, and that the two were in the same location at the same time on the day of the murder. During the first day of testimony, the defense tried to convince jurors that although the two phones were pinging off the same cell phone tower, that’s not proof the two people were together.

On Tuesday, the defendant took the stand and admitted he had killed Lindsey. His defense? Trans panic. But prosecutors said parts of his story don’t add up.

At press time, testimony was continuing. Alvarado could face up to life in prison for the murder.

Also this week, charges filed against Angelo Walker in connection with the 2020 murder of trans woman Merci Mack in Oak Cliff were dropped.

Police claimed Walker killed Merci over a video she was going to share on social media. But Walker just didn’t fit the description of the killer given to police. So prosecutors filed the request to dismiss the case, and State District Judge Tammy Kemp signed the order.

In Arlington, police continue their investigation into the murder of Kier Solomon, 21, who was found shot to death in a car in an apartment complex near Green Oaks Boulevard and Collins Street in late September.
Muhlaysia Booker made national news in April 2019 when she survived a brutal assault in an apartment parking lot. The attack was caught on video by onlookers, who offered no help, and the video went viral, focusing the nation’s attention on Dallas.

A month later, in May, Booker was murdered, her body dumped on a residential street in East Dallas.

Edward Thomas, the man who assaulted Muhlaysia Booker that April was convicted of misdemeanor assault and served a short sentence. He was arrested again earlier this year on charges that he murdered a woman following a fight in a South Dallas parking lot in September.

Kendrell Lyles, the man accused of Booker’s murder, still awaits trail. While the pandemic has caused delays of all criminal cases, pretrial motions filed by his attorney have delayed Lyles’ trial even further.

The murders of at least six other DFW transgender women — Shade Schuler in 2015, Armani Morgan in 2017, Brittany White in 2018 and Tiffany Thomas, CoCo Chanel Wortham and Kier Solomon this year — remain unsolved. According to the Human Rights Campaign, at least 45 trans or gender-non-conforming people have been murdered in the U.S. so far this year.

TDoR
In 1998, Rita Hester was stabbed 20 times, leaving blood splattered all over the walls and floor of her Boston apartment. Her murder has never been solved.

Hester’s murder inspired friends to hold a vigil in her memory. The hope was that by bringing attention to violence against the transgender community, the violence would stop.

That was the beginning of Transgender Day of Remembrance. But 23 years later, the violence hasn’t stopped.

More than 40 trans people were killed in the U.S. in 2020. And this year is on track to be the most violent against the trans community with at least 45 murders of trans or non-gender-conforming people already recorded. And this week, 23 years after Hester’s murder, prosecutors in the trial of Chynal Lindsey had to remind jurors that the victim was a person.

Pam Curry, a Reconciling Ministries Network national board member, is helping organize one of this year’s TDoR events in North Texas. She coordinated the first transgender remembrance in Dallas in 2002 and again the next year.

Curry had just moved back to Dallas and, although Transgender Day of Remembrance was just in its fourth year, she wondered why no one in the city was marking this event as was happening in other major cities across the country. So she organized the first Dallas commemoration at her then-church, Cathedral of Hope.

Because remembering people who have been killed was something she thought every reconciling and LGBTQ-affirming congregation should be doing, she included every LGBT-affirming church then listed in Dallas Voice as a co-sponsor. Today, however, she believes it’s something every church should be doing on their own and asked that every commemoration going on in the area be listed.

“It’s not a competition,” she said.

And, she said, TDoR should take place in more than just churches. Curry said she was delighted to see Nu Trans Movement holding a memorial at Marty’s Live.

Religion, she said, has hurt lots of members of the LGBTQ community, and not everyone is comfortable going into a church. So events at bars and an event that’s been held for several years at the downtown Dallas Public Library are just as important.

But Curry is concerned that TDoR events don’t reach allies and potential allies and are just preaching to the choir.

This year, Curry organized Northaven Church’s TDoR event on Nov. 20 at 5 p.m. St. Stephen’s UMC, the first Methodist Church in Dallas County to join the Reconciling Ministries Network, is participating, and Congregation Beth El Binah, a Reform synagogue with an outreach to the LGBTQ community that meets at Northaven, is a co-sponsor of the event.

Ministers from both of the churches will speak. The evening’s featured speaker is Stephanie Houston, mother of Muhlaysia Booker.

The event takes place at Northaven Church, 11211 Preston Road at 5 p.m. on Nov. 20. The event is open to the public. Northaven requests face masks be worn in the building.

Nu Trans Movement holds its Transgender Day of Remembrance memorial on Nov. 20 from 6-8 p.m. at Marty’s Live, 4207 Maple Ave. Minister Jay Gray will offer an opening prayer. A candlelight vigil will include a reading of the names of those lost over the last year, and a tribute show and spoken word performance will be followed by memories from friends and family.

Cathedral of Hope has regularly hosted or participated in Transgender Day of Remembrance events. This year, TDoR will be part of its regular Sunday morning services on Nov. 21.

“We’ll be heavily focused on Transgender Day of Remembrance,” said Scott Stout, who is executive assistant to the church’s leadership team.

The trial of Chynal Lindsey proves why Transgender Day of Remembrance events remain relevant and necessary: When the prosecutor in a murder trial has to remind jurors that the victim was a person, and the defense considers dehumanizing the victim to be a viable strategy, the problem is obvious.