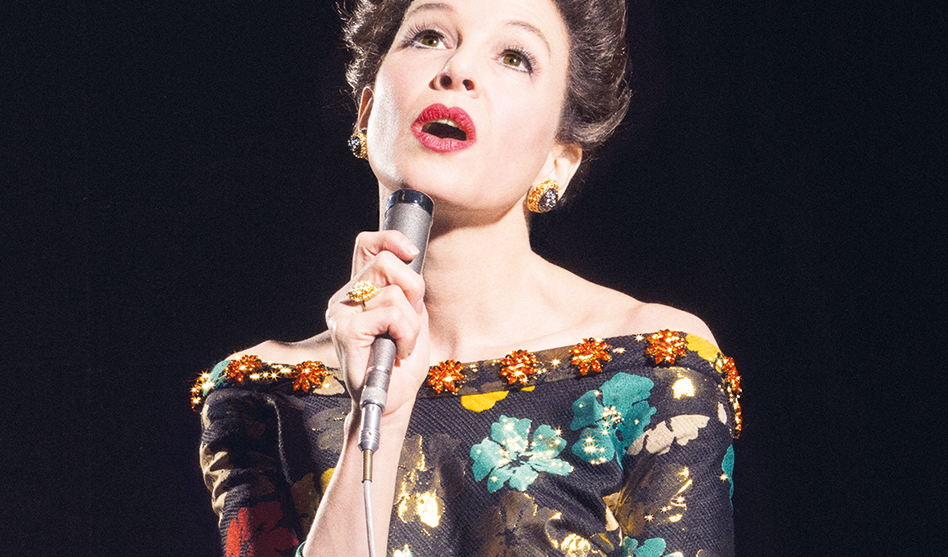 I never knew a world where Judy Garland was alive, but she was a living presence anyway. From the annual TV airings of The Wizard of Oz to the songs she popularized, her talent easily outlived her 47 years. But even as a child, before I knew the tragedy of her personal history, I could sense the sadness the permeated her. Even on numbers like “Get Happy” or “The Trolley Song,” there was something in the timbre of her voice that oozed heartache. It’s what made her such a popular interpreter of the Great American Songbook. When finally, in my late teens, I saw her greatest acting performance in A Star Is Born, it became clear this was a creature not meant long for this world. That she lasted as long as she did seems a blessing.

It would be facile (as many biopics about tragic artists can be) to reduce her life to a variation of the poor little rich girl: Terrorized as a child star by studio boss Louis B. Mayer, cursed in adulthood with a loveless home life, failed marriages and financial hardships, but most attributable to her own self-destructive habits. And anyway, she was famous! Imagine the joy she would have brought for decades more if only she had exercised some discipline! And the new film Judy does, in fact, touch on all those tropes like a baseball player running the bases. But something deeper emerges from the interstices of plot points: A fully realized, funny, complicated genius with tons of heart. And the designated hitter in this lineup is Renee Zellweger.

For about a decade starting in the mid-1990s, Zellweger was an unlikely star, breaking out with Jerry Maguire, then landing a hit franchise with the Bridget Jones movies, winning an Oscar (and another nomination) for Cold Mountain and Chicago … then all but disappearing (as actresses in their 40s sometimes do). While 2016’s Bridget Jones’ Baby made more than $200 million worldwide, it barely blipped in the U.S. with just $24 million. If you forgot she was even still acting, you could be forgiven.

Which, in some ways, intensifies the beauty of her performance here. There’s no baggage associated with her performance, no recent scandal or tic we’ve become accustomed to or bored by. So from the moment she appears onscreen, raven-haired with kids in tow and belting out songs like a pro, she’s transformed. You almost try to see the actress behind the performance, and you don’t. It’s a whiz-bang supernova of a performance, on the level of a Streep or a Day-Lewis. A movie about Judy Garland’s final comeback as a vehicle for Renee Zellweger’s own comeback?! Well, it’s just too perfect to miss.

The brilliance of the work resides not only in Zellweger’s, spot-on recreation of Garland’s vocal prowess, but in the physicality and details of her work. It’s not an impersonation, the kind a drag queen might do, but an embodiment: The tight smile, the humor, the desperation, the self-effacement, the carriage and gestures of a woman who often seemed ill-at-ease in her own body (she was prone to being chunky, so the studios starved her into stardom). Yes, she’s self-destructive, but she’s also damaged. Your disgust is supplanted by pity. (In one heartbreaking moment, Judy is found crying backstage after delivering a knockout show, and explains her tears thus: “What if I can’t do it again?”)

As told by screenwriter Tom Edge (freely adapting a play by Peter Quilter), Judy would have remained a gay icon even if her death in June 1969 hadn’t helped spark the Stonewall Riots and the modern gay rights movement. The film (set in 1968 in the months before her death) deals frankly with gay issues, including touching moments with two of Judy’s most devoted fans. And while the script and director Rupert Goold sometimes seem as if they are plucking scenes out of a handbook for lazy plotting, there’s no denying the power of the finale, an indelible scene that scorches its resonance on you like a brand. Try to walk away dry-eyed.