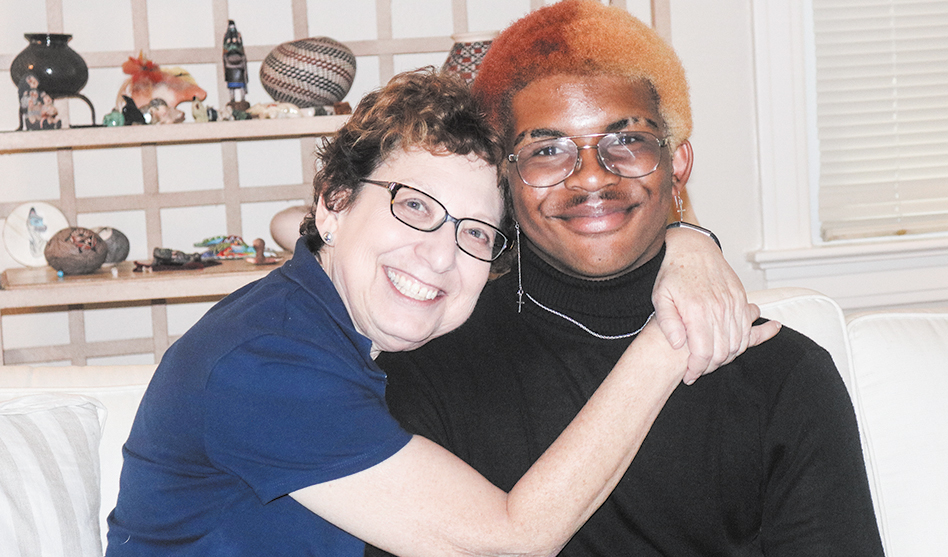 After 4 years in the foster system, a gay teen finds his forever home

Barbara Rosenberg adopted her foster son, Mason, on Sept. 6, after Mason had spent four years in the foster system. Most people who know them, though, would agree: Mason actually adopted Barbara.

Rosenberg said she only began thinking about becoming a foster parent when Josh Cogan, president and CEO of Outlast Youth, spoke to Congregation Beth El Binah. One thing he said stuck in her mind: There are lots of homeless LGBT teens.

She said the 2016 election had just passed, and she knew she needed to do something to make a difference.

So, she began to explore the idea of fostering. She learned that Jonathan’s Place in Garland offers the classes needed to become a certified foster parent, and they welcome LGBT foster parents. Even more important to Rosenberg, the agency was looking for “homes for children of all sexual orientations.”

She began her classes over that summer.

Part of the process of becoming a foster parent is going through home inspections. Rosenberg explained that some of the rules may seem arbitrary, but there’s probably a good reason behind each of them. In her house, she said, she had to replace a freestanding fireplace grate with one that was attached to the bricks.

People who had participated in the foster program came to speak. They described their experiences — both good and bad. Most talked of having as many as 10 children in and out of their care over a two-year period. Some were placed for weeks before they reconciled with their parents or other family members. Some stayed months. 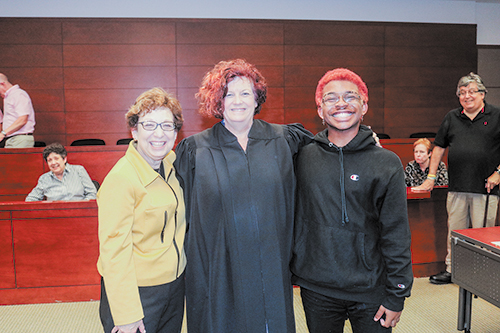 But there was lots of turnover.

Before children are placed, foster parents discuss with a caseworker what children they’re looking for. Most are looking for babies they plan to eventually adopt. Some are comfortable caring for special needs children, while others are not. Rosenberg wanted an LGBT teen.

In spring 2018, Rosenberg completed her certification and a week later a caseworker called to say that Mason needed a home.

He arrived with very little, although a few boxes of his things showed up a few weeks later. Rosenberg said she had three days to get him glasses — which had been broken in his last home — buy him school uniforms and register him for school.

She has since retired, but at the time Rosenberg was still working. For the last 15 years, she worked at Dallas City Hall in the city attorney’s office, but she’s best known for her judicial career. In January 1992, Gov. Ann Richards appointed Rosenberg to fill a vacant seat on the Dallas Court of Appeals. She had to run that November to finish the last two years of the unexpired term, and she faced Judge Jack Hampton, famous for giving a lighter sentence in 1988 to a Mesquite man convicted of killing two gay men because, Hampton said, “I don’t care much for queers.” Rosenberg won.

But despite her years of legal experience, being responsible for another person was a completely new experience for Rosenberg. She noted she was required to take more hours of continuing education to be a foster parent than she had to take to practice law.

From most of the stories she’d heard from other foster parents, Rosenberg expected a revolving door: Mason would be in school, and then a family member would take him in, and she’d get another child. But when school ended, Mason was still there, and Rosenberg found there aren’t as many options for teens as there are for younger children in terms of day care.

She registered him in a program at the Y, but that didn’t run until the new school year began again in August. Friends offered to take care of Mason on days she was working, but that wasn’t an option. The caregiver has to be certified to give day care, as well.

So on days when she didn’t have any place to leave Mason, she brought him to City Hall. But then two friends stepped in, including former state Rep. Harryette Ehrhardt, took the classes necessary and became certified to help care for Mason.

In October 2018, when Rosenberg retired from the city, it appeared Mason would be with her for a while.

Mason originally was removed from his parents when a teacher reported suspected abuse. Since then, he’d been in about six homes over the years. He became a good advocate for himself, and when he had problems, he called his caseworker.

“I’d tell them about it if I was having issues with the other kids,” he said.

He said his caseworker would open an investigation and remove him from the house. He described very generally what happened in some of his foster homes: “Parents were too strict or not taking care of me enough,” he said, describing his experiences as stressful because he doesn’t like new surroundings, and moving to a new family usually meant changing schools.

Mason said he didn’t think being a gay kid was the reason for abuse at home or not getting along with his foster families or other foster children. Coming out was never an issue, he explained, because he never came out. He’s always just been gay.

When Mason met Rosenberg, he said he thought she was nice. She was, he said, “loving.”

Mason said he doesn’t like crowds, but he makes friends easily. He comes across as a sweet kid who’s relieved he’s found a permanent home.

But underneath is evidence of what the foster system has done to him. “You have to protect yourself,” he said. “I have a big mouth when needed.”

His toughness comes across when he talked about seeing his birth mother on his birthday more than a year ago. The visit went well, he said. But does he want to see her again? “She has my number,” he replied.

For her part, Rosenberg said, “I try to be a gentle parent.” Mason likes to spend time by himself in his room, and “I let him do that,” she said.

Among the foster requirements are posting house rules. Rosenberg has three simple simple rules: Be respectful. Have healthy and clean habits. Work together.

Under each are some suggestions, like “Ask any questions” and “Talk about any problems.”

Rosenberg said soon after moving in, Mason began redecorating his room. Any mess, she said, he keeps in his room. “He has a lot of life skills,” she added. Having been in the foster system so long, Mason had learned to cook for himself and do his own laundry.

Monthly visits by the caseworkers, CASA volunteer and therapist are part of fostering. Court appearances are required to assess the foster child’s status. At one hearing, Rosenberg said she was surprised when Mason told the judge he wanted Rosenberg to adopt him. They talked about it at home.

“What surprised me the most was when he asked, ‘Can I change my name to your name?’” she said.

At his adoption in Judge Bonnie Goldstein’s court earlier this month, about 25 friends gathered to watch Mason and Rosenberg legally become a family. After swearing them in, the judge asked Rosenberg for documents, including papers showing that Mason’s birth parents had signed away parental rights.

Then Goldstein asked Mason to state his name for the record, he proudly said, “Mason Rosenberg.”

“Not yet,” the judge said, smiling. He looked deflated. She asked him a few questions to make sure that adoption was what he wanted and that he fully understood what it meant. And when she finally declared him to legally be Mason Rosenberg, everyone in the courtroom began crying and applauding.

Mason has settled in as a student at Woodrow Wilson High School. He’s proud that as a junior, he already has some college credit under his belt. Last year he took AP Art, and this year he’s taking 2D Design.

Does he have plans for his future? “I’m still figuring it out,” he said, but he’d like to major in graphic design, fashion or cinematography. He wants to take classes in each to see where he best fits.

Mason does know that he’d like to go to UNT or Texas State because both have good art programs. To Rosenberg’s relief, the state covers tuition at a state school for foster children. Rosenberg noted that although it’s available, most foster kids can’t take advantage of the opportunity, since most who age out of the system are out on the street on their 18th birthday.

Happily Mason’s only problem is to decide which school he’ll attend.

So now that Mason’s a Rosenberg, how are things going? “Too smooth,” Mason said, still not quite believing he’s finally really home.       █

Information on fostering is available from Jonathan’s Place at JPKids.org.