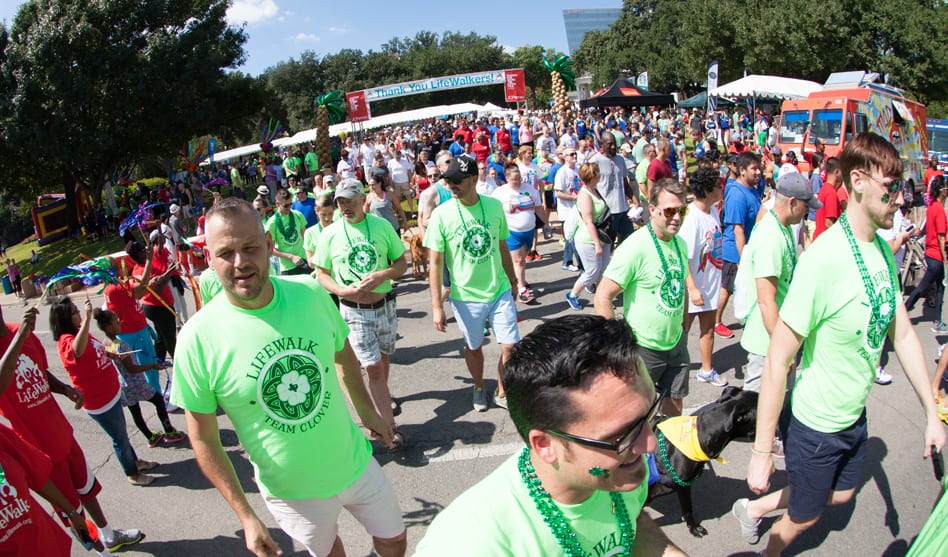 People living with HIV are developing heart disease at twice the rate of the general population, and Prism Health and Harvard Medical School want to know why.

Prism Health is participating in a large study on the subject organized by Harvard Medical School. Tori Hobbs, chief marketing and development officer for Prism Health, said research to develop the best care for people with HIV is one place your money goes when you participate in LifeWalk.

The study is to find prevention strategies for strokes and heart attacks is called REPRIEVE — Randomized Trial to Prevent Vascular Events in HIV. Katie Fitch, a nurse practitioner at Massachusetts General Hospital, is the program manager.

Fitch said the elevated risk might be a combination of traditional risk factors — like diet, exercise, smoking, aging — and nontraditional factors — like immune system activation. Some older HIV medications, she said, raise triglycerides and indirectly cause heart disease.

“We’re giving people a statin when they’re considered to be at low risk,” she said, adding that some HIV medications “might have an effect on diabetes and glucose, which is a heart disease factor.”

Other HIV medications cause lypodystrophy, an abnormal accumulation of weight, usually in the belly, as well as a loss of subcutaneous fat, which Fitch called “good fat.” Both can cause production of plaque that clogs arteries causing heart disease.

But statins are usually prescribed after there’s an indication of high cholesterol. In this study, Fitch said, the medication is given as a preventive.

The study is looking for 7,500 participants total at 116 sites around the world. About 7,000 are already participating.

Potential participants must be between 40 and 75 years old and stable on their anti-retroviral regimen for at least six months.

They must have no history of heart disease and not be currently taking a statin. The study, which began in 2015, will continue through 2022.

Fitch called REPRIEVE a “straightforward study. Come in for a screening. If [you] qualify, [you’ll] be randomized to go on a placebo or a statin.”

Women with HIV are encouraged to participate, because researchers are also studying the difference between male and female effectiveness.

Lauren Rogers, Prism Health’s clinical research manager, said she’s signed up a number of people and is looking for more. But, she admitted, “Asking people to take one more medication can be a hard sell.”

Participants must come in once every four months and take an extra set of labs once a year.

“We know that current anti-HIV medications work really well and therefore our patients are living longer,” Rogers said. “As our patient population ages, it is exciting to see research studies specifically for HIV and co-morbidities such as cardiovascular disease.”

She said Prism has for years advocated for studies like this, to learn how HIV and anti-HIV medications impact the body and the progression of diseases and conditions such as cardiovascular disease, diabetes and cancer. Now, Rogers said, “REPRIEVE is opening the door for future study into these conditions in people living with HIV.”

Rogers said you do not need to currently be a patient at Prism Health to participate. She has referred several Amelia Court patients back to UT Southwestern, which is also participating in the study. But someone who is currently with a private physician or at another clinic can continue seeing their own doctor and participate in the study.

To discuss participating in this or other studies through Prism Health, call 972-807-7370 and ask for the research coordinator.

The 2018 LifeWalk: Walk to End AIDS is set for Sunday, Oct. 7, at Oak Lawn Park on Turtle Creek. Day-of registration and the festival open at 11 a.m., and the walk itself steps off at 1 p.m.

Registration is $40, which can be paid online at LifeWalk.org, prior to the event, or at the park on the day of the walk. Those paying online in advance can either pay the full amount or pledge to raise at least $40.

LifeWalk.org also gives participants the chance to create a LifeWalk team, join an existing team, or donate to an individual walker, a team or in general.

The festival includes food and beverage booths, health education booths, music, games and more, and the entire event is family- and pet-friendly.

The walk is a 5K — 3.2 miles — through the Turtle Creek/Uptown neighborhoods, beginning and ending at Oak Lawn Park.