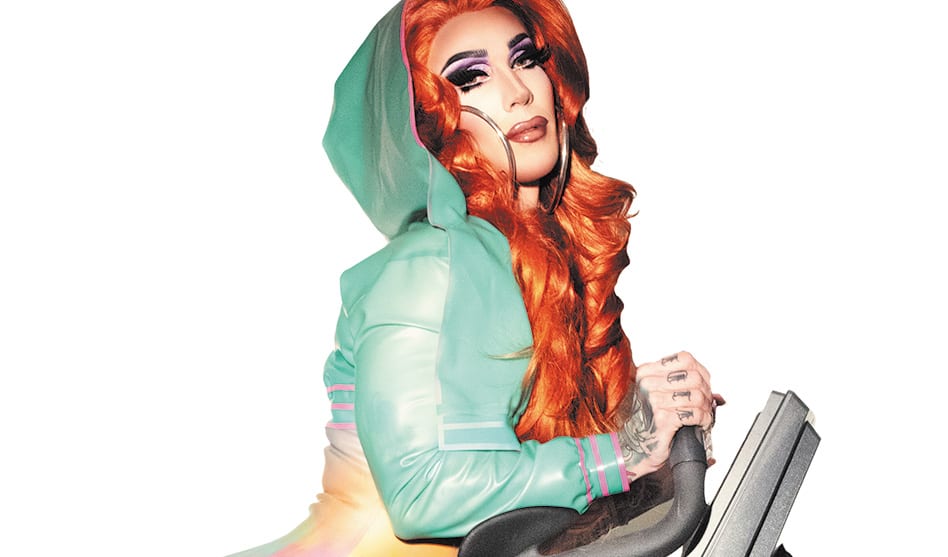 With flawless hair and makeup and an hourglass silhouette, Kameron Michaels is undeniably a striking drag queen. Yet when the wig, paint and padding are removed, so is the effeminacy. Out of drag, Michaels — a deep-voiced guy who enjoys working out at the gym, playing video games and collecting body art — is more a hot, wayward brother than a sassy, cheerleader sister.

As a Season 10 contestant on RuPaul’s Drag Race, Michaels’ underwear-model physique immediately captured the attention of his castmates and viewers alike. But it was an uncanny ability to impersonate Cher — and three consecutive lip sync battle wins near the end — that established Michaels as a contender for the show’s top prize.

That’s something Dallas audiences can witness in person on Oct. 14, when Michaels joins champion Aquaria and fellow finalists Eureka and Dallas’ Asia O’Hara (and others) in presenting the RuPaul’s Drag Race: Werq the World Tour at the Majestic Theater.

Before that, we spoke with Michaels about the things she learned as a Drag Race contestant, her anti-bullying advocacy, her love for her sisters and, of course, drag.

Dallas Voice: What is the biggest misconception people have about drag queens? Kameron Michaels: Everybody thinks we are catty and we fight all the time and don’t get along. I mean, Aquaria and I sat in an arcade last night and played a Jurassic Park video game for like 30 minutes. I think that’s the misconception: that we fight or we don’t like each other. We do. It’s like a sisterhood.

I don’t necessarily think of drag queens as having gym memberships. Have you always been a fitness enthusiast? No, that came into my life about five or six years ago. I started going to the gym with my ex-boyfriend. It was something we started doing together, then we broke up. I kept going by myself and it kind of took over my life a little bit. I wasn’t doing drag at the time. It had my full attention, and it just kind of changed my life.

Was being fit an advantage in Drag Race? I think it definitely helped my brand a little bit. I remember when I sent in my audition tape, I didn’t talk about it a lot in the video. But I kind of branded myself [saying], “This is why you want me on the show because it’s a type of character you’ve never had before.”

I usually think of drag queens as being gregarious, but you have said you are an introvert. I’ve come out of my shell a lot since the show. I think we all go to RuPaul’s Drag Race to learn something about ourselves. Your phones are taken away. You are in a room by yourself when you are not filming. You have a lot of time to self-reflect. I did learn a lot about myself. I’m not as reserved as I was, but I’m still one of the most reserved queens ever to be on the show.

Tell me about your first time in drag. How and why did you get started? Did someone mentor you? I was go-go dancing at a local bar in Nashville and, of course, working around drag queens. I was kind of obsessed with them. I was like, “I want to do that, too!” They put me in drag. It’s all downhill from there. Once you are onstage, you’re hooked. It’s like a drug and you want to keep doing it. I did have someone help me in the beginning. I learned makeup on my own, but she helped me by making me costumes. But most of my drag I was self-taught.

How do you describe your particular style of drag? I always say that my drag is a mix of old school and new drag. I grew up around old school drag — fringe costumes and dance. Dancing is a big thing for me. I know a lot of queens don’t dance anymore. That was a huge part of drag to me … fringe costumes and dance, dance, dance. I am definitely influenced by that, [but I also] take part in crazy makeup sometimes and newer songs. I don’t do a whole lot of old school stuff besides my costumes.

What motivated you to apply for Drag Race? I sent in an audition tape a couple of years ago. I don’t know if they got it because I sent it in at midnight on the deadline. The most recent one was because I went through a bad breakup. I wasn’t doing drag at the time. I was like, “You know what? I want to give drag one more try.” And I auditioned.

Tell me what you learned about yourself from your Drag Race experience. I definitely learned that I am a lot more introverted than I thought. I never would have pegged myself as introverted. I never would have said that about myself. But being around other people who aren’t my friends who have to get to know me, you start learning things about how other people perceive you. I was perceived a whole different way than I thought I was coming off. I certainly learned a lot about my own personality in that environment.

How have things changed for you, both personally and professionally, since Drag Race? Well, my life is completely different. I was a hairstylist. I had a normal 9-to-5 schedule. I went to the gym every day. I went to yoga. I went to the grocery store. I haven’t done that in about five months. It’s just a completely different lifestyle than what I was used to. It’s taken some adjusting. I don’t get to go to the gym at all anymore because I’m on the road. I don’t get to see my friends that much. But then again I’ve made new friends because of touring. Things have shifted and adjusted, but all for the good, I think.

Was there a turning point for you during Drag Race when you thought, “Wow! I might just win this!” I would say the episode that I sent [Miz] Cracker home. I never thought I would make it past the first couple episodes. I was convinced I was going home the entire season. And then once I sent Cracker home, which was my third lip sync in a row, I was like, “Oh my god!” I remember pacing back and forth backstage after that realizing that I was top four. That moment was pretty scary.

Did you ever imagine becoming internationally known? No, it’s crazy. We were walking around a mall in Manchester or Brighton [in England]… me and Aquaria and two of the dancers. The kids were running up to us in the mall asking to take pictures. In Australia, on the other side of the world, the same thing happened. People just run up to us wherever we are. It’s insane. It’s so crazy.

How often are you recognized when you are out of drag? The tattoos definitely help people recognize me. It happens at airports. It happens at malls. We were in Cheektowaga [New York recently]. We went to the mall across the street and there were some kids in the food court who recognized Aquaria and me. We were shopping for makeup at Sephora and a kid stopped us. It’s just insane [to visit] places we’ve never been to and people know who we are. It happens a lot.

Tell me about your tattoos. Do they have special significance? My left arm is my favorite because it’s nostalgic to me. Right now it’s just Jurassic Park and the movie Aliens. It’s all my favorite movies and video games from my childhood on my left arm. The chest tattoo is a scarab. I got that when I started working out and going to the gym because the scarab represents kind of a rebirth. That was me finding out who I was meant to be and really doing things for myself … taking time for myself. That’s why I got that one.

What is the biggest personal sacrifice you have made for your drag career? The gym. I have not been to the gym in months. I get to choose either sleep or gym. For me to be able to do this job and do it properly, I need rest. I’m choosing sleep over the gym right now. Right now we are on a tour bus, so there is no gym. I have not adjusted to keeping the same lifestyle that I had while I’m on the road. I’m letting it ride right now while I’m busy. Hopefully when it dies down a little bit in the spring, I can find that again. I can always go back and find the gym. This is more important right now.

Do you feel Drag Race has given you a platform to make the world a better place? What issues are important to you? Absolutely. Something that I talk about at all the Pride events and online sometimes is bullying. The biggest thing with me is gay youth. [Bullying] was something that I went through as a child. It was a terrible and treacherous life to make it through high school as a gay youth. That’s something important to me. There is a gay youth center in Nashville I plan to do stuff with when I am eventually home. My mom volunteers there. I’ve volunteered there a few times with her. Hopefully when I’m home, maybe in the winter or spring, we can do some stuff with them.

Where do you see the future of drag? I don’t know. I think there are just so many different types of drag. It’s constantly evolving and changing. It’s like fashion, going backwards and picking up pieces from past entertainers. Then somebody will do something kind of fresh and kind of new. It’s always evolving. I wouldn’t have a clue. I don’t know what to tell you. It’s such a pool of old ideas and new ideas. They just get thrown together. I don’t know. It’s always going to be good, though. It’s always going to be entertaining. And that’s what matters.