‘Pride is the people’ 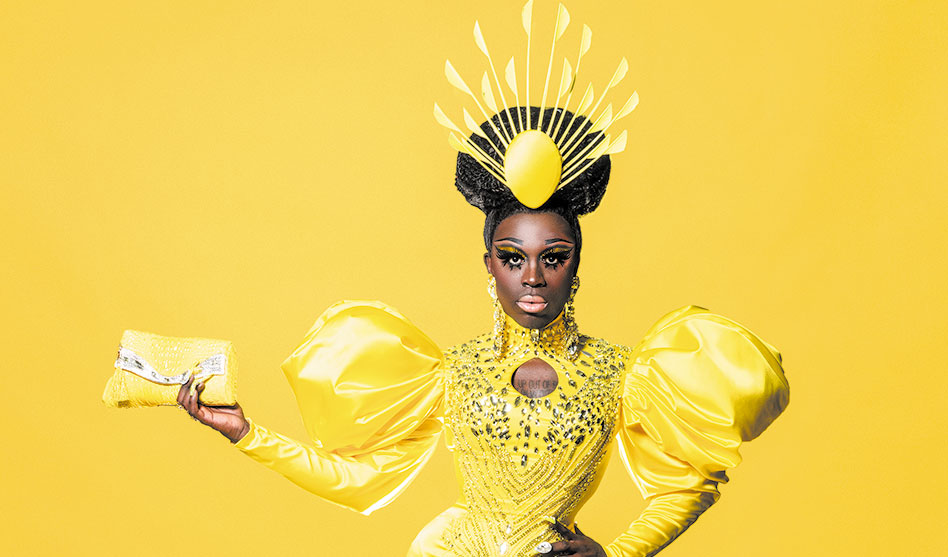 Maintaining a packed schedule can be tricky for drag queens at the best of times, but for Bob the Drag Queen, even a global pandemic can’t keep her down. Despite heading into a Pride season filled with nearly across-the-board event cancellations and postponements due to the novel coronavirus, the Season 8 winner of RuPaul’s Drag Race is regularly making appearances across the virtual stage everywhere. Fans can catch Bob in the HBO series We’re Here, brand-new comedy special Bob the Drag Queen: Live at Caroline’s, MTV’s Drag My Dad, on her Sibling Rivalry podcast with fellow Drag Race winner Monét X Change and across YouTube.

But as much as this showcases Bob’s wide range as a performer, she’s also using some of her platforms as an opportunity to make note of, and show support to, the nationwide police brutality protests. In the midst of a packed-despite-the-odds schedule, we caught up with Bob to get a feel for drag in the age of COVID-19, the importance of increased visibility for black queer performers and the deep personal connections people create through drag.

Dallas Voice: What does it feel like to be a drag queen during a summer that has celebrated Pride virtually? Bob the Drag Queen: Well, I mean, I’m not saddened by it. I think that Pride is different not only because of COVID-19 but because of the Black Lives Matter Movement, and I’m excited that the world is going to be focusing on Black queer stories.

A lot of Prides are certainly taking a similar approach. New York City Pride used its platform to protest police brutality, and there’s a lot of talk about how the first Pride was a riot and really going back to Stonewall’s beginnings. Do you think, given the roots of drag and gay culture stemming from people like Marsha P. Johnson, that it’s the responsibility of fans and performers of drag to really educate themselves on the culture? I think it would give you a more fruitful experience in terms of celebrating Pride. I think if you want to have a fruitful experience with Pride, a fully well-rounded experience to know what it is you’re celebrating, then yeah, you’re gonna wanna do your research, which, by the way, is not even hard. Like, it’s not like this is 1999 where you have to go down to the library or get an Encyclopedia Britannica or something. There’s tons of documentaries and movies, articles [and] entire Instagram accounts dedicated to this stuff.

I was looking at your YouTube channel and you’ve had conversations with fellow Drag Race performer Peppermint about racism in the drag community. How do you confront conversations about race in drag, whether it be face-to-face or online? Well, every once in a while, I will have to confront things face-to-face if I experience a microaggression or an aggression-aggression against myself or my tribe. And online it happens a lot. People feel bold online to say potentially whatever they want to say because they don’t actually have to see your face. And if I think there’s a moment for growth, then I’ll address it. And if not, then, especially if it’s online, I’ll just let it fly over my head because, you know, some people online are just trolling. You know, looking to elicit a response. 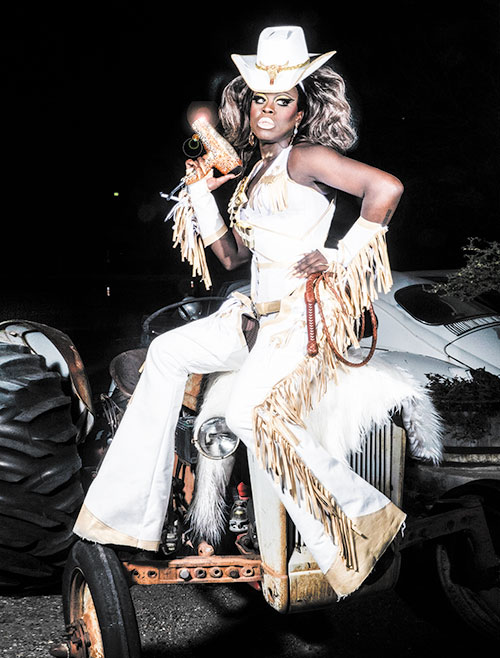 Now more than ever it seems that performers have to be aware of what’s socially and politically going on. Does being “on” all the time in that way get exhausting? I felt exhausted kind of as a person in general, and I haven’t done drag in over a week, and I just didn’t feel up to it. I canceled a couple of things, quite frankly, because I just felt so affected. But then again, I would also say as a black queer artist I do think that it is important for me to share my success stories and let people know that there are — you know, I know how much it means for me to see those things from Black queer artists. So I’m definitely picking myself up by the wig straps and getting back in there, because I think it’s important for people out there to see a successful Black queer artist, quite frankly.

About your HBO show We’re Here, which was just renewed for a second season: What was your reaction when you heard the pitch that you’re going to go to small-town America and do drag? Well, at first I was nervous that it was going to be a show where I go from town to town and just go and put a bunch of straight people into drag, and that I didn’t want to do. But when I found out that wasn’t the pitch I was really excited. There’s no shade or nothing against any show that does do that — Drag My Dad is a show where we put straight people in drag — but I just felt like I would like to have a different impact on a different show. And I’m so proud of the show; I’m so happy with the way it turned out and the fact that we’re telling diverse stories. That I’m probably the most proud of.

You’re from the South originally. Did doing the show actually make you confront some of your issues with small-town America or go face-to-face with that? I moved all around the South a lot as a kid, and I did have this feeling of, “I have no community here,” especially once I was out of college. Once I got out of college, I was like, “Once I’m out of college all the other theater department people leave, and I’m going to have no one.” And what I’m realizing now is that there almost certainly was a community in probably all of those towns — they’re maybe small, they probably were reflective of the population, and maybe I would have not have felt so compelled to leave. I didn’t necessarily leave the South with a great case of, “I’m out for the South,” you know?

Do you think that sometimes drag is not thought of as high of an art form as it could be? Well, I think it depends on who you’re talking to. I mean, in my circles it’s regarded as an extremely high art form [laughs], but I’m sure there’s someone out there who doesn’t see the value in it. But, I mean, in my experience my craft has been respected. And when I say respected, I mean, like, sometimes you’re doing a TV show or movie, and they want you to do drag and you’re like, “OK, but this is all the things that go with being in drag.” Like, if we tell you that we need to do drag at a really elevated level, a lot of people don’t realize that it’s really not just going to your local Halloween costume store and buying a couple of costumes. It is a lot of work to craft a really beautiful drag queen from custom garments to custom hair — everything that goes into it. And HBO really, really rose to the occasion.

In many of your projects, it seems like you’re connecting with people when you put them in drag. What do you think is so disarming about that process? Well, I think it’s disarming because someone is completely out of their element. They have to trust you, because they don’t know what they’re doing at all. So they’re in your hands, like, “I have to trust you because I’m so clueless.” And I not only want to take advantage of that trust but utilize it to the best of my ability.

Was there a drag moment in one of the projects that you’ve done where there was a connection that occurred that caught you off guard? I really loved the conversation that I had with Nate, Darren and Lady Shug in Shiprock, N.M. That was really beautiful, to hear them talk about what it means to be indigenous and the intersectionality between being queer and indigenous. That’s probably one of my favorite moments, and I also really loved the moment that I had with Tanner in Branson, where I basically told them my story with, you know, Christianity and homosexuality and helping come to a conclusion on that.

Do you think COVID-19 will impact the way people do drag not only in the near future but permanently? As I was navigating the land of the internet and drag shows in quarantine, I realized how many folks were saying, “I’ve never gotten a chance to see you before because I can’t leave the house for a list of reasons.” Some people have anxiety, some people are disabled, some people just don’t have enough money, some people live in an area where they don’t have access, some people are in the closet. And they finally got to see some of their favorite drag queens perform, and I was like, “Maybe I should continue with this.” I would like to be able to keep this going for people who, you know — I mean, maybe not as much as I’m doing now during lockdown — but maybe I can continue these kind of performances for people who can’t get out of the house.

Do you have a message for people who might be feeling especially vulnerable during this Pride season? Just think about it like this — this is something I’m pulling from the church, and I’m not religious, but I did go to church for quite some while: Church isn’t the building, it’s the people. And Pride isn’t the parade. Pride isn’t the parties. It’s the people. It’s what we bring to Pride. So, you can still have Pride without having to be surrounded by thousands of people. Pride is a feeling you have deep inside yourself. That’s why we call it Pride.