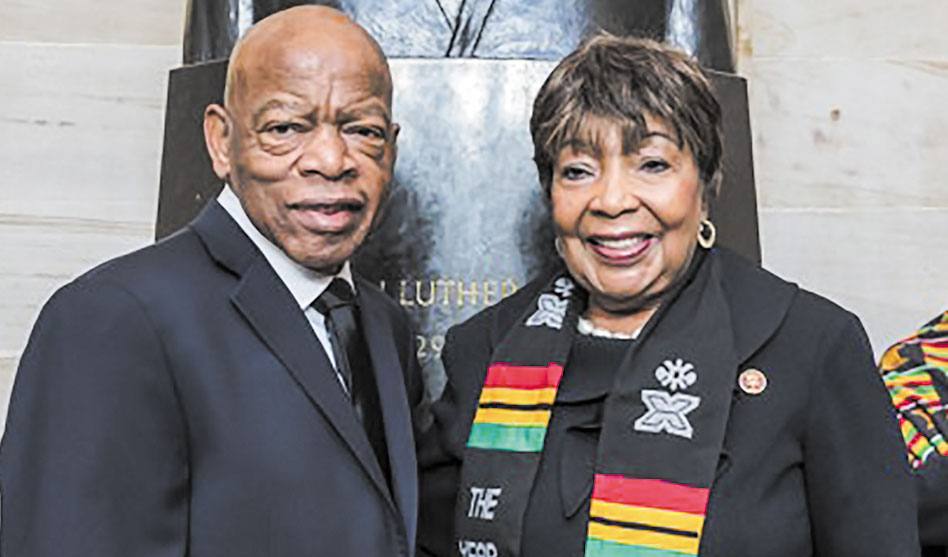 GBTQ rights supporters are mourning the loss of Rep. John Lewis, D-Ga., a civil rights icon who worked with Dr. Martin Luther King Jr. in the 1960s and who has been a leading voice for civil rights for all people throughout his tenure in government.
Lewis, 80, died late Friday, July 17, after a battle with pancreatic cancer.

Alphonso David, president of the Human Rights Campaign, said in a statement that Lewis was “a hero and civil rights icon who pushed our country closer to the promise of a more perfect union.”

“Future generations will learn how he faced down discrimination with courage and defiance, boldly challenging the United States to envision a future where every person, no matter their race, sexual orientation or gender identity, has an equal chance at the American Dream,” David said. “His legacy will live on in the work we do every day to further his mission and continue to get into ‘good trouble’ in the name of equality and justice.” 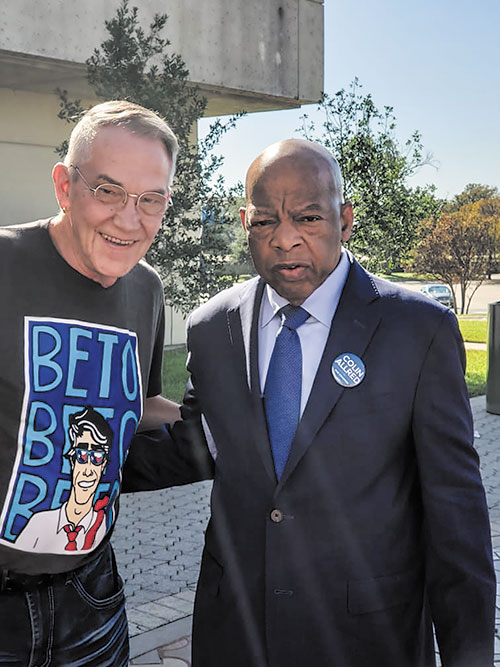 Don Maison this week recalled the time when he and a friend went to the African American Museum of Art one day but couldn’t find parking in the unusually crowded parking lot. So when they went in, they asked what was going on and were told it was a campaign event for Collin Allred. They went in to the reception where U.S. Rep Eddie Bernice Johnson saw Maison and motioned for him to come over. She then introduced him to Georgia Congressman John Lewis, giving Maison the chance to tell Lewis, “I’ve admired you for years.” (Photo courtesy of Don Maison)

U.S. Rep. Eddie Bernice Johnson of Dallas, who has served with Lewis since she was first elected to Congress in 1992, said this week, “This nation, and the world, are better today because of the courage, dignity, kindness, love, decency and fierce commitment to justice of my dear friend and colleague, Congressman John Lewis.

“Throughout the halls of Congress and sitting next to each other in the House chamber, we discussed together the complex laws, details of our work and how we can better serve our constituents regardless of their faith, ethnicity, or sexual preference,” Johnson continued. “Whenever I asked him to visit Dallas, he never hesitated and was always among the first to offer his help and support. I am forever grateful for his wisdom, inspiration, and guidance.

“We shared triumphs and trials together,” she added. “One of those trying times came when we were arrested together in 2006 for peacefully protesting outside the Embassy of Sudan. After being arrested we were held in separate cells. I could not see him. Then soon I heard his voice directing us to sing civil rights songs — we sang loud, strong and long. We kept up so much noise that we were allowed to bail-out in four hours. I will remember and keep alive his relentless fight for equality. My prayers are with his family.”

In the 1960s, Lewis was a leader of the Civil Rights Movement, which fought for voting rights for Black Americans and the end to legalized segregation in the United States. Lewis helped organize the 1963 March on Washington, where King delivered his iconic “I Have a Dream” speech and was the youngest person to speak from the stage at that march.

Lewis also took part in the Selma to Montgomery marches in 1965, when in an event later known as “Bloody Sunday,” Alabama state troopers beat Black demonstrators seeking to register Black Americans to vote after they stopped to pray peacefully.

During his long service as a lawmaker representing Georgia in the U.S. House beginning in 1987, Lewis would describe those events in contemporary tellings as “good trouble” and “necessary trouble.” Former President Barack Obama awarded Lewis the Presidential Medal of Freedom.

Janson Wu, executive director of the New England-based GLBTQ Advocates & Defenders, said in a statement Lewis’s death “is a tremendous loss at a moment when his moral conviction and clarity are needed perhaps more than ever.

“But his legacy and vision are alive in a new generation of young leaders pushing today to dismantle the systemic racism and white supremacy that persist within our institutions of power,” Wu said. “His insistence on believing that America could be a country where true justice prevails for everyone is both an inspiration and a challenge to us all to stay engaged in that work.”

Lewis was a strong supporter of LGBTQ rights in Congress, lending his support to the Equality Act, legislation that would amend the Civil Rights Act of 1965 to ban anti-LGBTQ discrimination. Lewis also was lead sponsor of the Every Child Deserves a Family Act, legislation that would prohibit anti-LGBTQ discrimination in adoption.

Kevin Jennings, CEO of Lambda Legal, said in a statement Lewis demonstrated a commitment to LGBTQ people in face of anti-LGBTQ attacks from the Trump administration.

“As an LGBT advocate, John Lewis was not only a champion of marriage equality, but he introduced the Equality Act, a bill to prohibit discrimination on the basis of sexual orientation or gender identity in employment, housing, credit, education and jury service,” Jennings said. “He has stood with our communities against the recent attacks from the Trump administration that we are fighting in court, including the ban on transgender service members and the anti-transgender health care rule.”

President Barack Obama issued a statement saying that “America is a constant work in progress” and that Lewis recognized the power of ordinary citizens to enact change.

“In so many ways, John’s life was exceptional,” Obama said. “But he never believed that what he did was more than any citizen of this country might do. He believed that in all of us, there exists the capacity for great courage, a longing to do what’s right, a willingness to love all people and to extend to them their God-given rights to dignity and respect. And it’s because he saw the best in all of us that he will continue, even in his passing, to serve as a beacon in that long journey towards a more perfect union.”

The AIDS Healthcare Foundation also issued a statement mourning Lewis’ death, with AHF President Michael Weinstein thanking the congressman for “his tireless, lifelong work — on civil rights, social justice, health care and more — far beyond the reach and accomplishment of most men.” AHF Board Chair Cynthia Davis added, “The African-American community and country have lost a stalwart from the Civil Rights Movement and a giant among men. … May his passion for civil rights, social justice and health equity live on and continue to affect the hearts and minds of a new generation of social and political activists.”

And Imara Canady, chair of AHF’s Atlanta-based Black Leadership AIDS Crisis Coalition, called Lewis “a servant-leader. … No matter the issue, no matter your sexual orientation, gender identity, socio-economic status, he represented all people. Even with all that was on his plate, he never missed an opportunity to be with his constituents and had a unique ability to make everyone he encountered feel important. He was relentless in the ongoing fight for justice for all people, stood up against foolery and gave new meaning to the transformative impact of fearless advocacy.”

“Our country has lost a leader, a Civil Rights hero and a relentless champion for justice who changed our nation for the better. Tonight we mourn. Tomorrow we will continue making good trouble in his honor,” Ortiz Jones said.

And Dallas Mayor Eric Johnson called Lewis “a true civil rights icon and an American hero. His commitment to the fight for justice, fairness, and equality was universally admired. He will be sorely missed.”

Chris Johnson is chief political and White House reporter for the Washington Blade and is a member of the White House Correspondents’Association.